.
As I'm sure many of you know, the ballroom scene in the Haunted Mansion has a soundtrack in addition to the organ.  It's party noise, the sound of clinking glasses and laughter.  (Bonus trivia:  At the 52 second mark you can hear a woman say, "Oh, that's the funniest story I ever heard.")

Eerily enough, laughter and tinkling glasses are attested in accounts of "real" hauntings.  Not far from where I live, in the Santa Cruz mountains, is Brookdale Lodge, built in 1924 and closed in 2011 after being declared a firetrap.  In recent years it's been completely renovated and is open again for business.

Here's the long story extremely short: Brookdale Lodge is thoroughly haunted, say many.  Among the ghostly manifestations reported have been these: 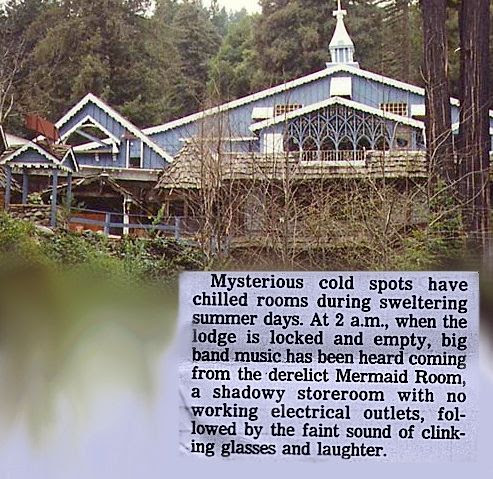 Edit October 2019: It seems that actress Elke Sommer and her husband Joe lived in a haunted house for a time. It's a fun read. One ghostly phenomenon in particular catches our attention:

"In the middle of the night, Elke and Joe would wake up to what sounded like a dinner party going on downstairs in the dining room, hearing voices, chairs scooting, glassed tinkling, and silverware clanging. Yet they would go downstairs and no one would be there."


(Thanks to Doombuggies.com for directing our attention to the article cited)

And that delightfully intriguing introduction, dear friends, becomes now the flimsy pretext for winging our way into a pure trivia post, one for the hypergeeks.  Hey, it's summertime, and the living is easy.  We can't float around in the ozone all the time, indulging in grandiose theorizing.  Besides, one man's trash is another man's treasure, as the saying goes, and if you happen to be a serious porcelain or glassware buff as well as a Mansionhead, this may jolly well be your lucky day.  Right, so let's do the dishes.

The ghosts seated at the table in the grand hall have to put up with cobwebs, dust, and a tattered
tablecloth, but at least their china is in good shape.  Fit for a king it is—nay, fit for a Caesar. 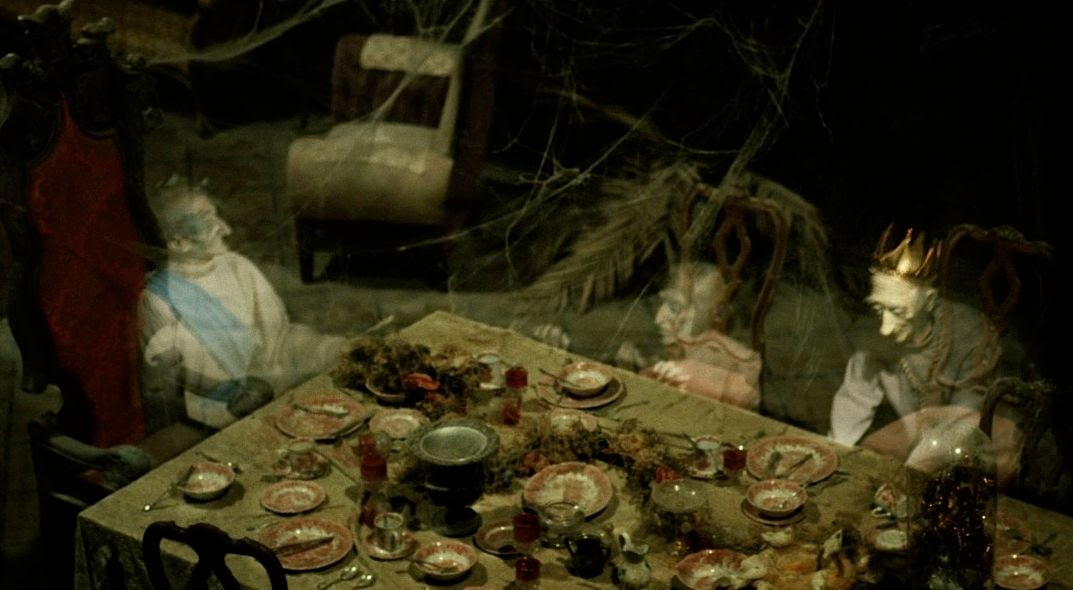 But there's nothing on the plates, which raises the question:  Other than deathday cake and
spirits, what do ghosts eat and drink?  Answer: Donut holes and evaporated milk!  *bad-a-bing* 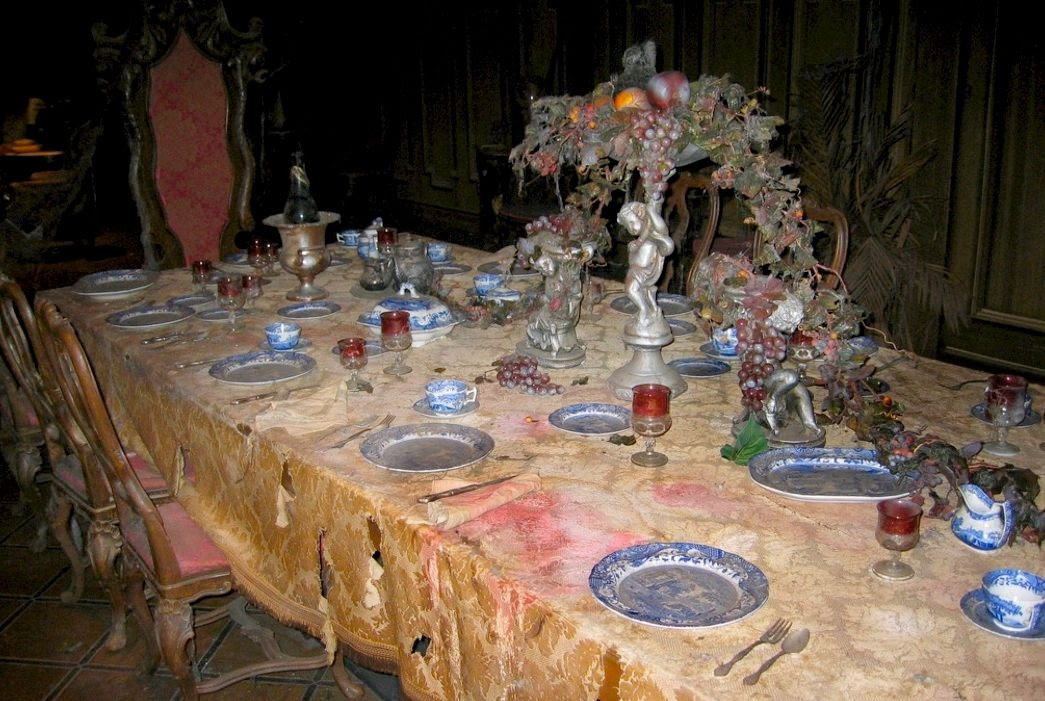 
That pretty blue tableware you see today at Disneyland is not the original china.  When the Imagineers first set the table early in the summer of 1969 for publicity shots in advance of the soon-to-be-opened Haunted Mansion, they used a different set: 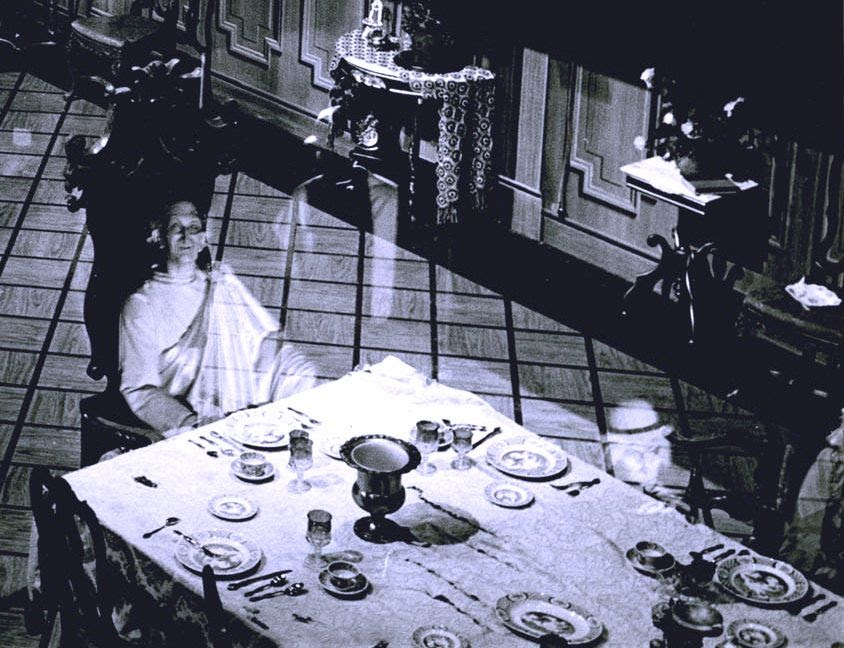 Some of you readers who really know your porcelain may be able to identify the style.  I haven't been able to.  That china is also seen in the pre-opening, WED ride-thru film that we have spoken of before.  That's the weary stock film that they continue to recycle whenever they need interior footage of the Haunted Mansion.  By the way, in the two shots (above and below), notice how bare the table is compared to what is there now. That original china is seen in other photography too, the commercial photos intended for souvenir guides, slides, postcards, View-Master reels, etc.  These were also taken before the Mansion opened, in order that they might be ready to sell by the time the ride debuted.  Those pictures were taken a bit later, however, since the table has now been fully decorated. 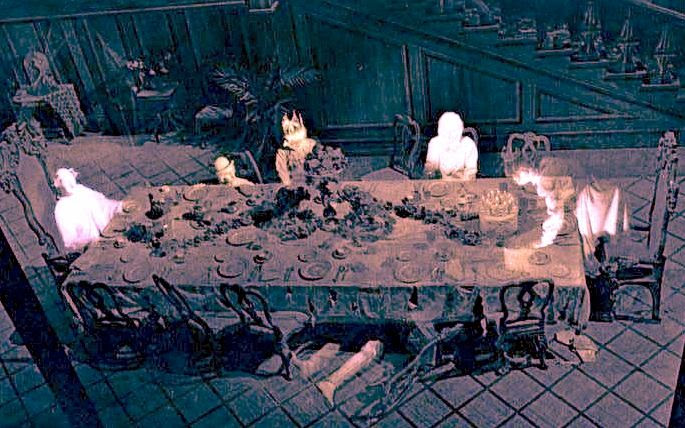 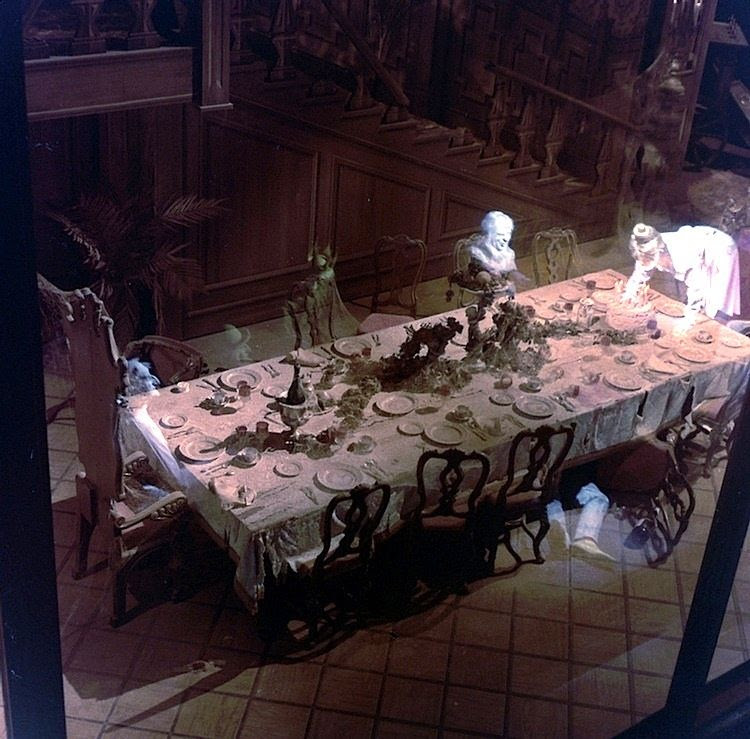 In that last photograph (a Panavue slide), the plates came out pretty pale, but if you look closely there's no doubt it's the same stuff:

I don't know when they replaced this tableware with the blue dishes.  I have one snapshot, labeled "early 70's,"
showing the white dishes still in play.  They were replaced sometime before 1988, when these were taken: The blue dishes are Spode Blue Italian.  "Spode" is a name spoken in hushed and reverent tones by connoisseurs of fine china.  It's a very old English producer of fine earthenware.  Blue Italian was launched in 1816 and is still in production today, one of Spode's most popular styles. 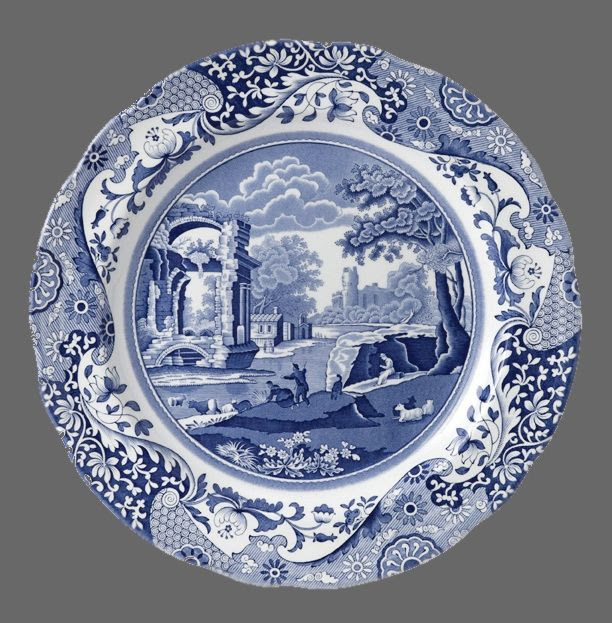 If you examine it closely, it's some crazy stuff, but taken as a whole and from a
normal distance, there's something immensely satisfying about the total design.

Are they antiques?  The Imagineers did use genuine antiques in the original attic, although they replaced most of them with less-valuable junk later.  Spode allows their artisans some leeway, so there are idiosyncratic differences in the various batches of Blue Italian produced over the years, like the number of sheep pictured, or slight differences in the shades of blue, all of which makes it possible to date a plate with some degree of confidence, even from a photograph.  I asked Andrew Pye at the website Lovers of Blue and White if he could date the Mansion plates from some pix I sent him, and he opined that they were from the 1960s or 70s.  In other words, they weren't antiques but were bought new.

Yes, that's a "hidden Mickey."  I mean, duh.  I'm not into those, but there it is.
The plate on the right is from a batch picturing one fewer sheep than the others. 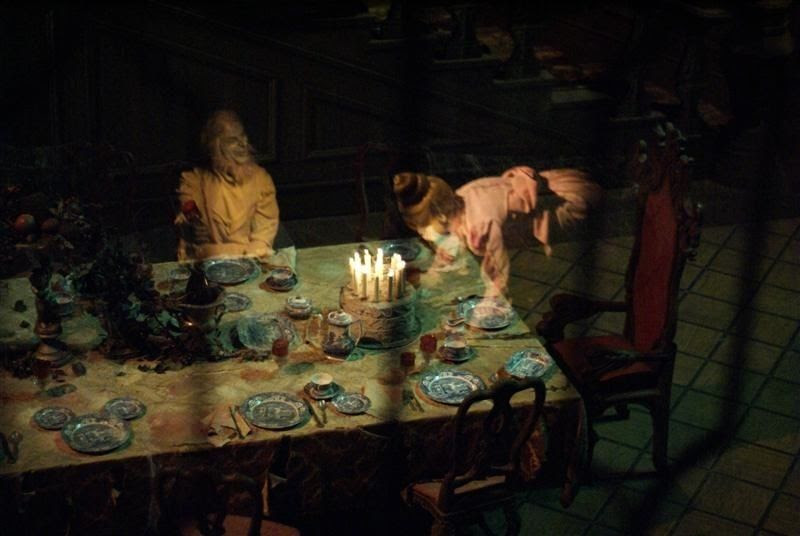 Unlike Disneyland, Walt Disney World has had the same china on its ballroom table from the beginning. 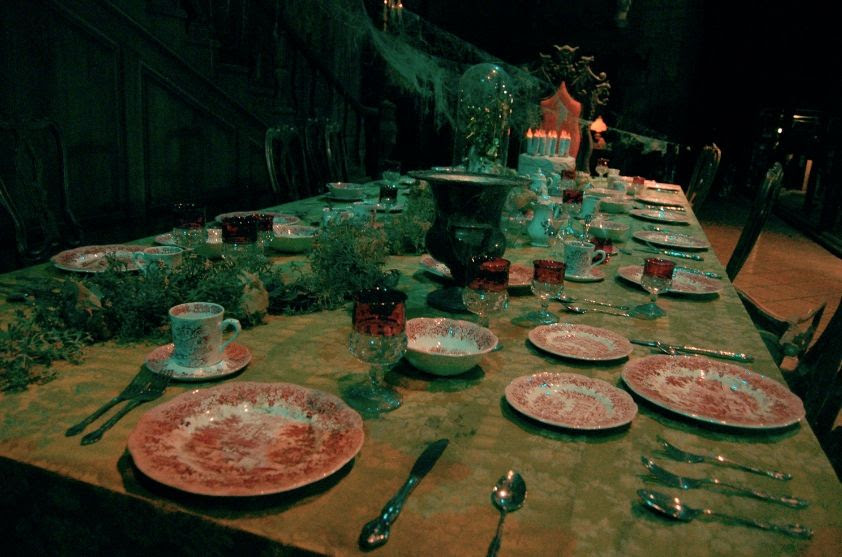 That is J. and G. Meakin, Romantic England Red.  Meakin is another venerable English pottery manufacturer.  Ironically, Romantic England
was produced "primarily for the North American Market".  It comes in several different colors, and there are 35 different scenes pictured. 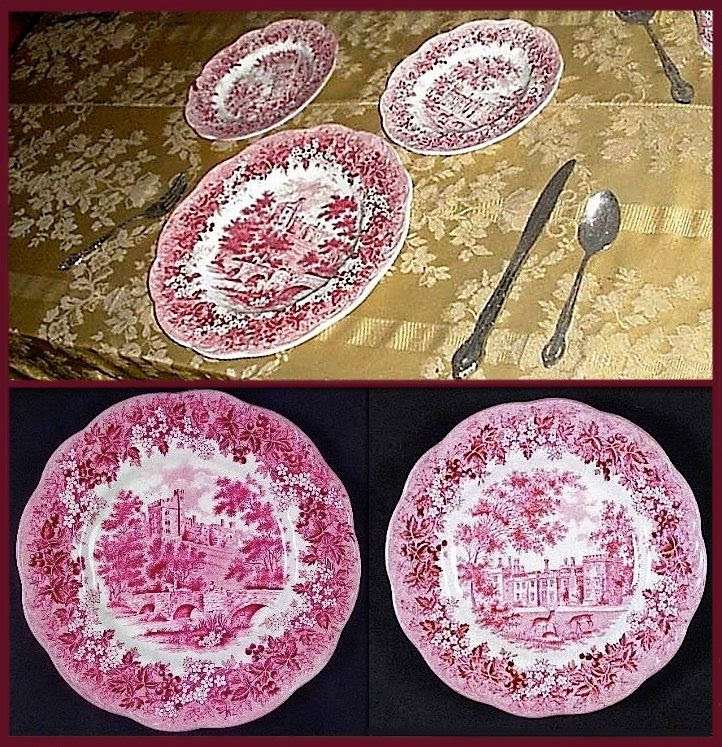 By way of contrast, here's an example of Romantic England Blue: 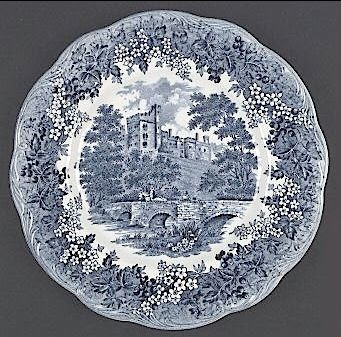 I'm generally not very interested in this sort of thing, but
dang, I must say those aren't bad looking chunks of glass.

Tokyo has yet another style of tableware.  Sorry to disappoint, but based on the photos I've seen, it could be any of a number of styles that feature wide red borders.  This is the best pic I've got.  A more practiced eye than mine may hazard a guess.  Maybe they're from Red China. *bad-a-bing*


(See now below for a good guess as to what Tokyo is using.) 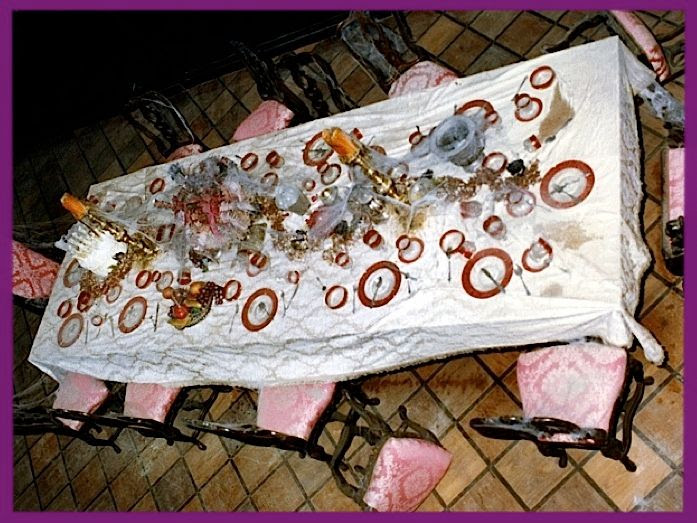 The photos of the Phantom Manor table are better, but it appears that they have more than one style in use, as you can see.  Some one
of you out there may well be able to identify them, but I'm afraid this too is beyond my ken.  It's even beyond my barbie. *bad-a-bing*


Getting back to things I actually do know, the flatware in Disneyland and Walt Disney World is Oneida Cantata.  I think it's Satin Cantata in Anaheim, but it may look that way just because it's dusty! 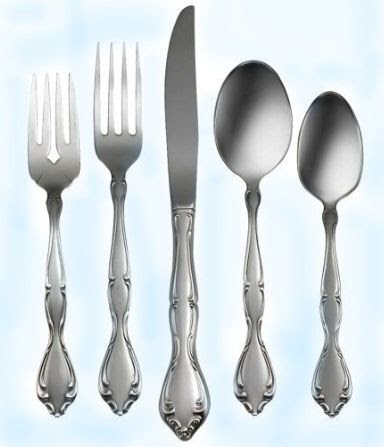 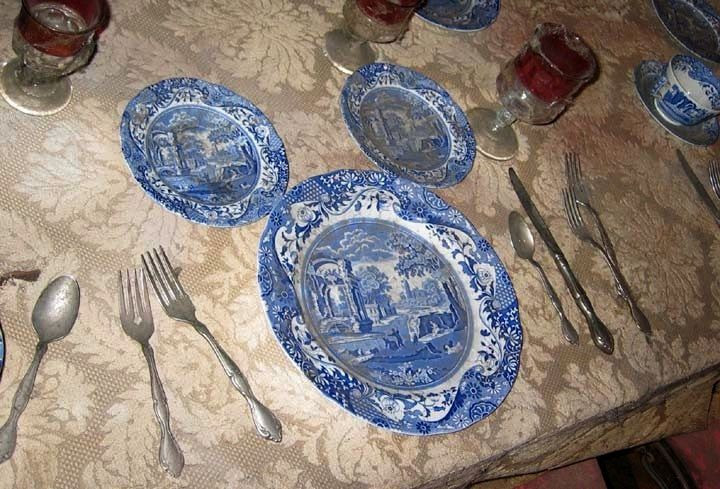 
There remains only those striking red goblets to identify.  These have been on the DL ballroom table unchanged since before opening day.  Both WDW and Tokyo use them as well, so they're everywhere but Phantom Manor and always have been.  They're plainly visible in that pre-opening publicity shot we were looking at earlier.  Imagine that.  At last we have come to the imaginary source of our imaginary clinking. 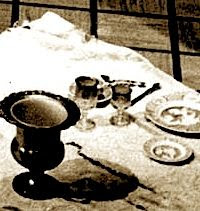 Once again we have to do with a very popular brand born in the 1800s. 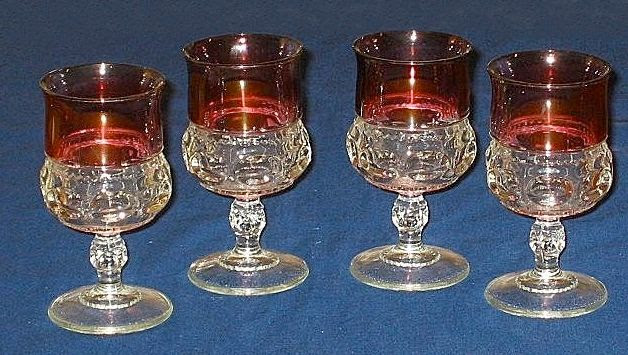 This one is a little complicated.  The style was originally created in the late 19th century by Adams Glass and called "Excelsior."  And Gloria, in Excelsior's day, oh! these must have been popular, because after Adams went out of business, Tiffin Glass apparently got the molds and continued production, calling it King's Crown.  That's the name that really stuck, but it's also called "Thumbprint," and later, when different colors were introduced, you had to specify "cranberry." Another glassmaker, Indiana Glass, was producing a very similar line at the same time Tiffin was, and when Tiffin called it quits Indiana was the only game in town, producing their version of King's Crown into the 1990's.  A few knock-offs are still being made, servicing the replacement market I suppose.  Authentic KC seems to have an enthusiastic following among collectors.


We may as well take this trivial pursuit to the bitter end, since it's not likely we'll ever
pass this way again.  There are two sizes in use at all three Haunted Mansions:  King's
Crown cranberry wine glasses (small) and King's Crown cranberry claret wine glasses (large). 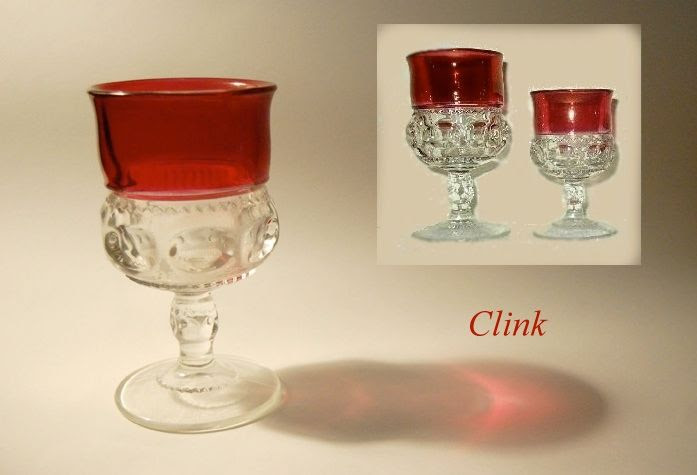 Update: Reader "Grinning Ghost" thinks that Tokyo simply ordered up more glassware in the King's Crown style,
and that's what is on their table in toto.  Looks right to me.  Compare the Tokyo table photo above with this: 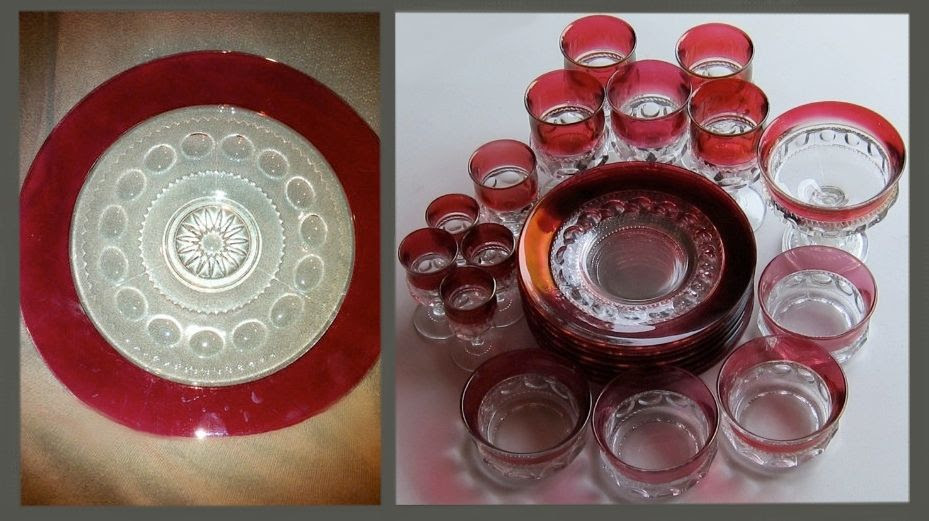 And So, In Conclusion

What?  Are you expecting something more?  I told you that this was a straight trivia post.  I tried to jazz it up with funnies, hoping to inspire a few Oh-that's-the-funniest-thing-I-ever-read 's, but I'm afraid most of them were clinkers.  *bad-a-BING, dammit*

One thing I can tell you that may be of interest is that the china is not particularly expensive or hard to find.  If Mansionology is for you a guilty pleasure, and your Long-Forgotten habit is something you must keep carefully shielded from public view (it's okay, I understand; the world isn't ready for us), one way you can discreetly display your secret vice is by getting one of these plates and a wall hanger.  To others it's just a nice plaque, but you know what it really is, and it'll set you back maybe 20 or 30 bucks, a lot cheaper and (if you ask me) a lot more beautiful than most of the crappy merchandise and "collectibles" Disney serves up for Mansion fans.