History Rewritten! Mind-Blowing New Artwork of the Black Prince and the Flying Dutchman

.
What's this? Another new post? Yes, it's so. The Mansion gods won't let poor old Long-Forgotten rest in peace. LF cannot and must not ignore bombshellery of this caliber. Truth be told, it would be hard to imagine something that fits our profile more precisely, i. e. "ruminations and revelations concerning the history and artistry of the Haunted Mansion."

Kind of a clunky title, though.

We all know that Marc Davis (and presumably the other Imagineers with him) originally planned changing portraits that ran through several panels, often as many as six. We just looked at one in the previous post. Most famously in this regard, it's common knowledge among Mansioneers that April-December was originally going to be April-June-September-December.

We also know (or thought we knew) that this idea was abandoned when they settled on the ride's current format. They realized that they only had time for a simple, back-and-forth transition from one picture to another, we are told. Anything longer would hold up the crowd, so the multi-panel portraits were chopped back to two panels. We also know that some of Marc's changing portraits never had more than two panels to begin with, and we know that one of those was the Black Prince. 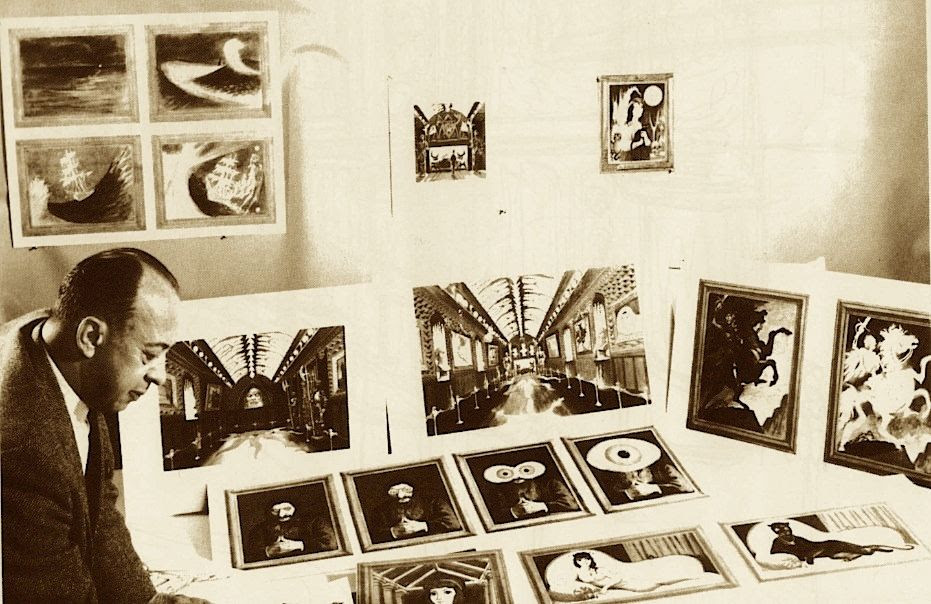 Marc's original concept sketches of the Black Prince can be seen at far right
in that 1964 photo. Good quality reproductions have long been available: 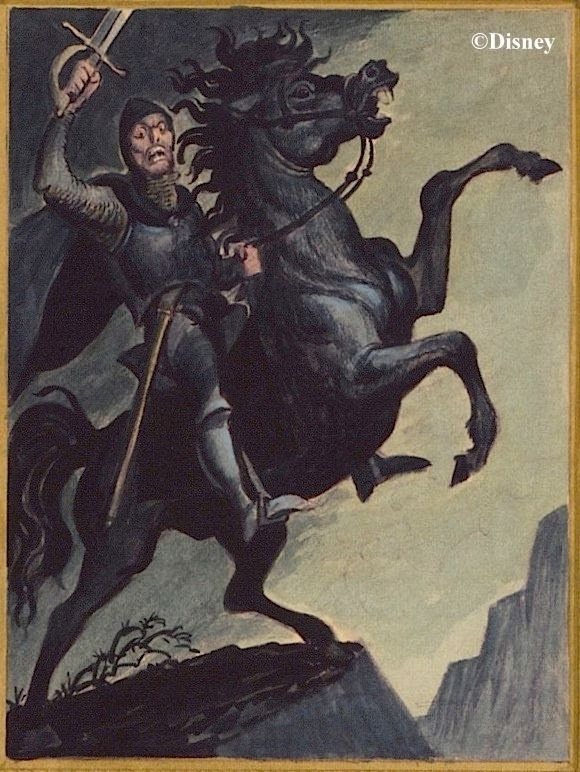 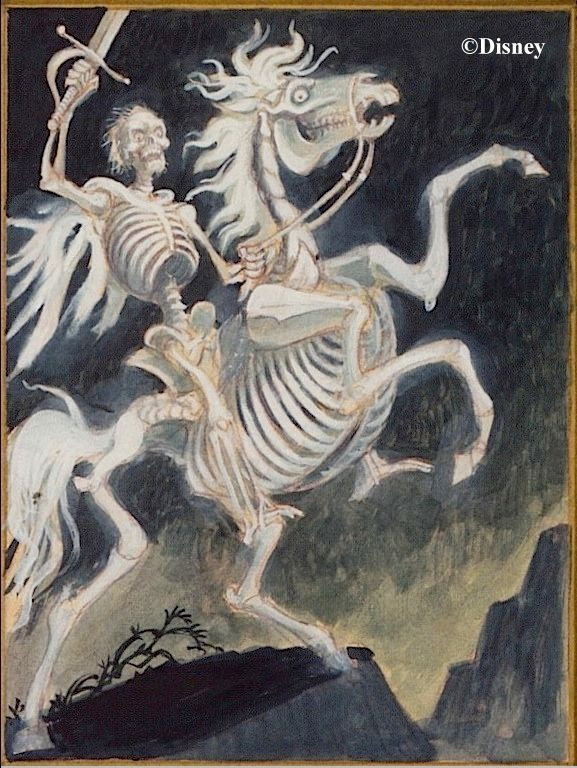 Working with Marc, artist Ed Kohn turned these sketches into production paintings, and these in
turn were photographed as slides to be used with the back-projection effect developed by Yale Gracey. 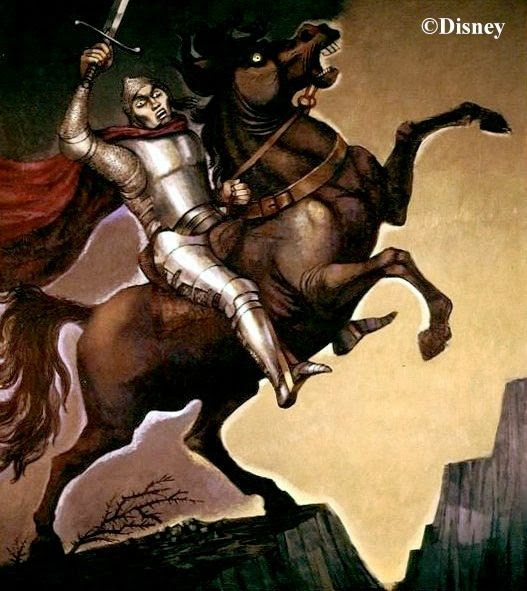 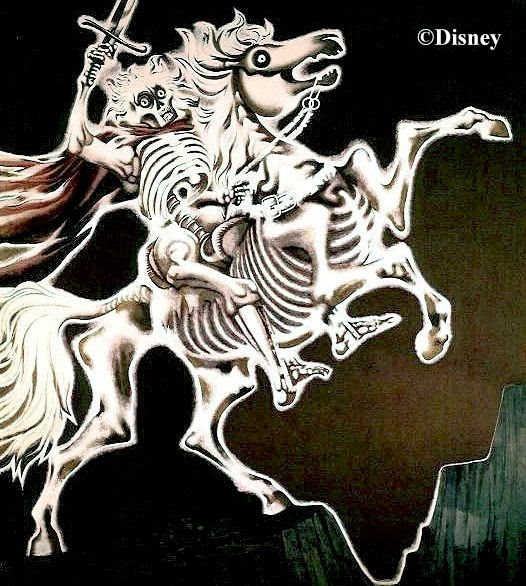 Flash—flash he went, back and forth; so he did originally, and so again he has since 2005.
(For most of his existence, of course, the two portraits alternated via a slow, morphing fade).


Who Knew? Part One

It all sounds so simple and straightforward, but believe it or not, the two-panel Black Prince changing portrait
was actually expanded into a six-panel set, and slides were even produced, ready for use in the actual ride. 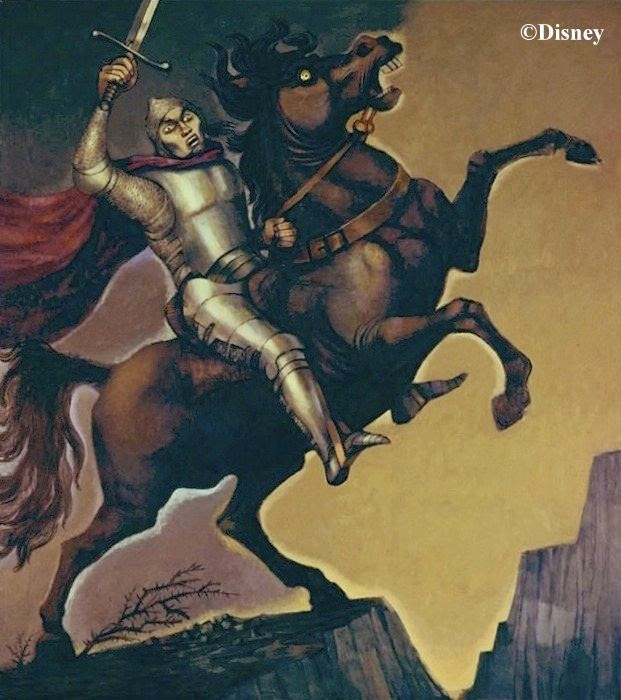 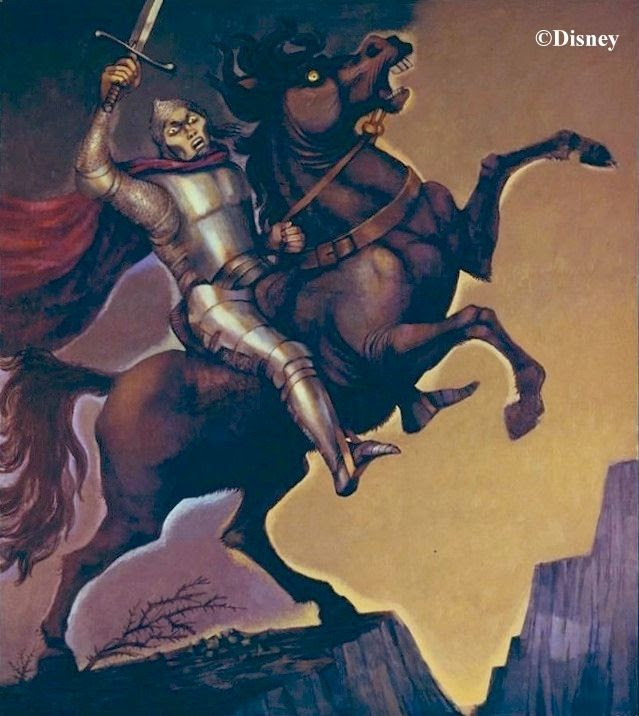 (The difference between #1 and #2 is surprisingly minuscule: the horse's belly has contracted slightly, and his underside in
general is a teensy-weeny bit shaggier. The knight's armor has a few rust spots beginning to show. And that's all I can see.) 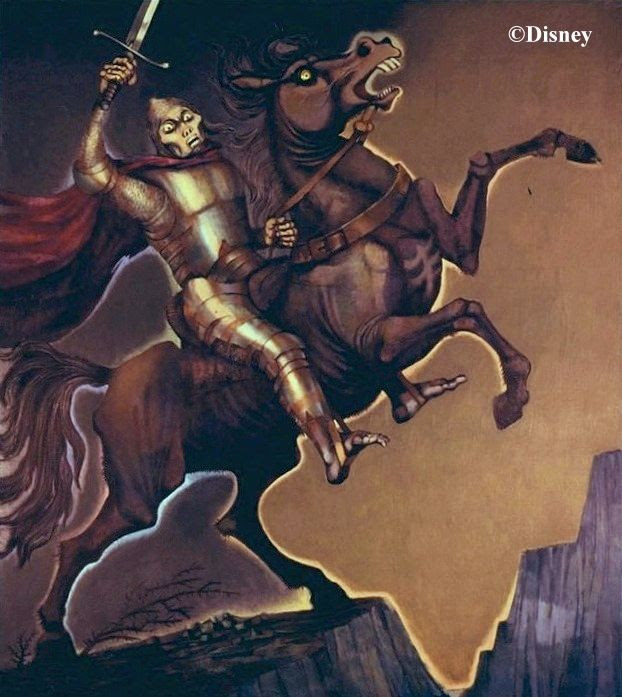 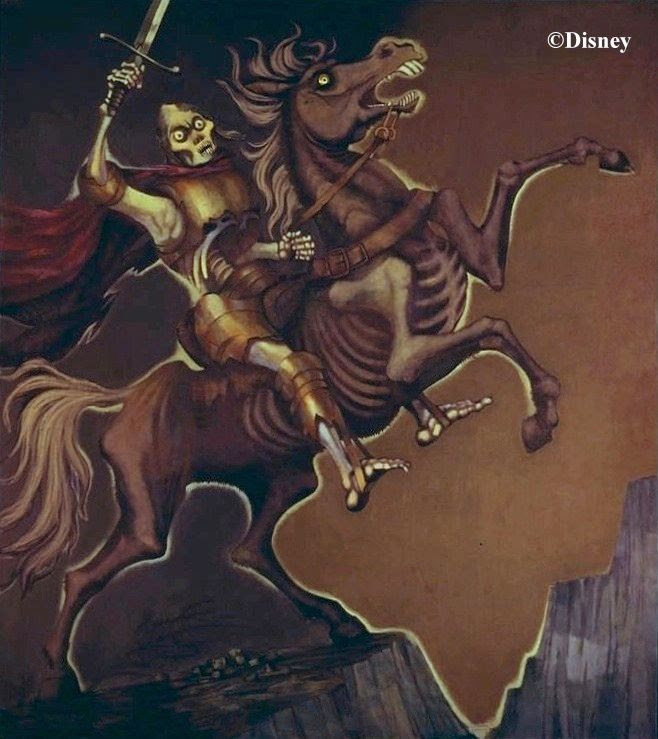 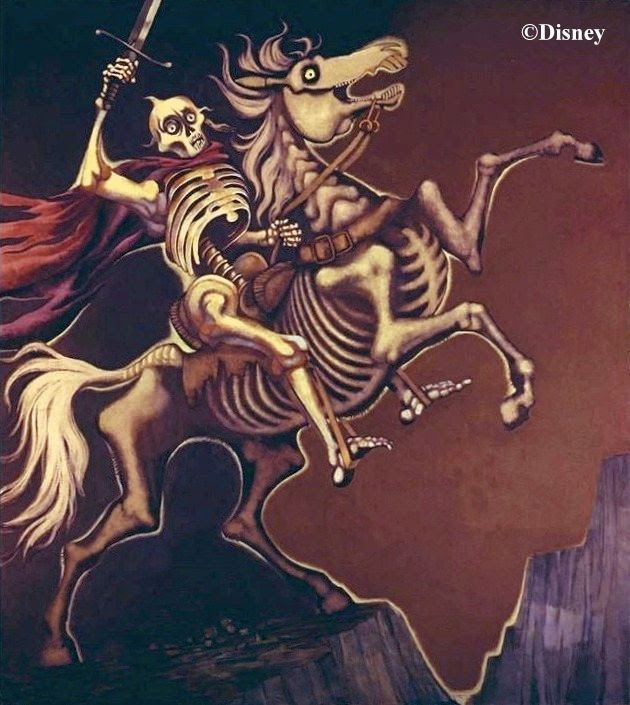 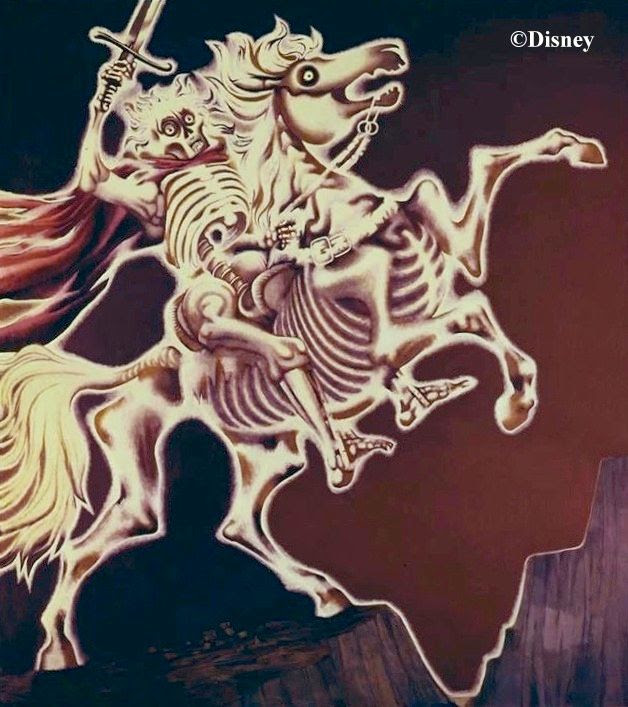 Kohn's paintings were reproduced as slides, and what you see here are photographs taken of those slides. You might recognize that the first and last are the same two that were actually used in the ride from 1969 until 2004. (The high-tech version that debuted in 2005 was a fresh rendering based closely on Kohn.) To the best of my knowledge, no one knew that Kohn actually did a six-painting series and that the series was actually made into slides, ready for use. One set will presently be available for auction in the Van Eaton Galleries Disneyland collection.

I've color-corrected and straightened photos of the set. Happily, the retreat
into magenta haze is not far advanced, and they restored rather well: 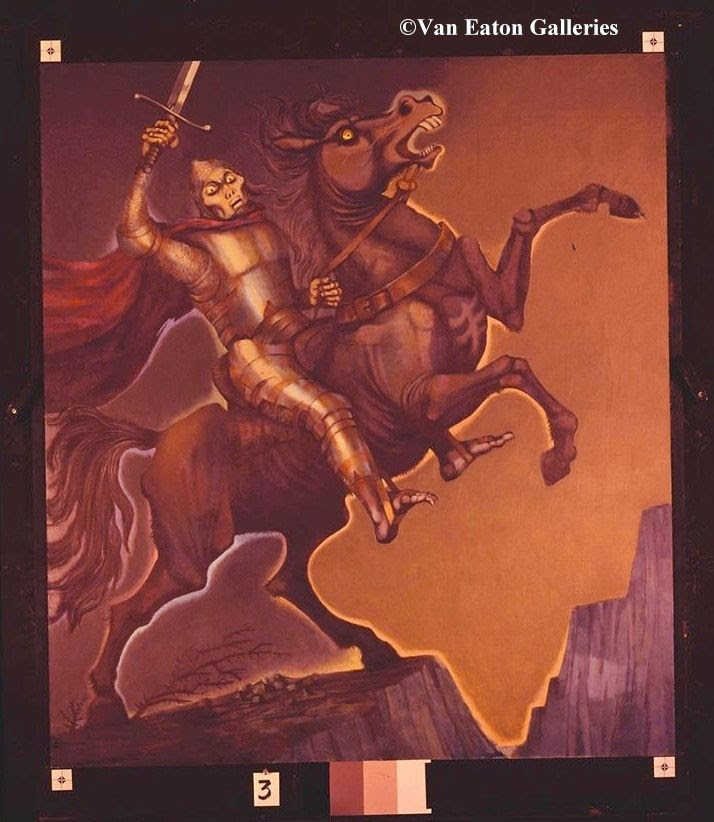 With the publication of the catalog (about a month after this post was first written),
most of the mysteries of these slide sets have been explained. Here's what it says:

Very informative. You can toss out the "sometime before or shortly after the HM opened" remark. The six-image display was definitely NOT in operation when the ride opened. You can also disregard the appeal to "concepty art" for the portrait hall showing paintings on both sides as a possible explanation for why so many sets of slides were produced. They're thinking of Marc's "Great Hall" concept art from 1965, those surrealistic, red paintings we've posted so many times before. By the time these sets were produced, they had long since designed the hallway with paintings on one side only. (And what's with that "concepty art"? Gotta be a typo. Pray that it's a typo.)

The Van Eaton catalog also has a set of sunburned photos of production slides featuring the Flying Dutchman. Like the Black Prince set, the slides are reproductions of Ed Kohn paintings. That set too is full of surprises.

Unlike the Black Prince, in the case of the Dutchman we have known for a long time that the two-phase changing portrait seen in the ride is an abbreviation of an originally six-panel concept. Before 2005, we were looking at these Kohn paintings, alternating endlessly with each other: 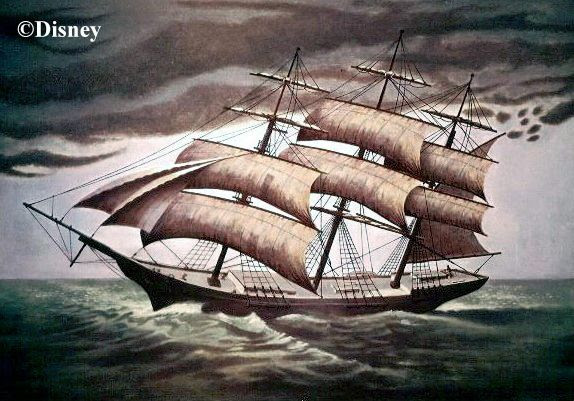 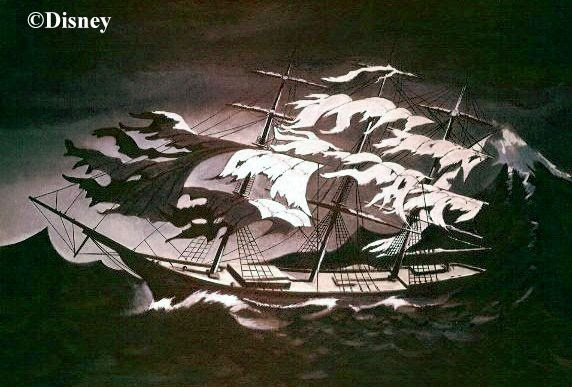 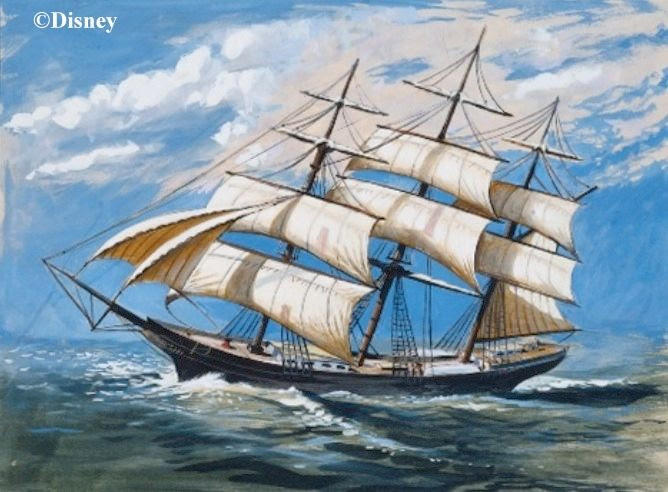 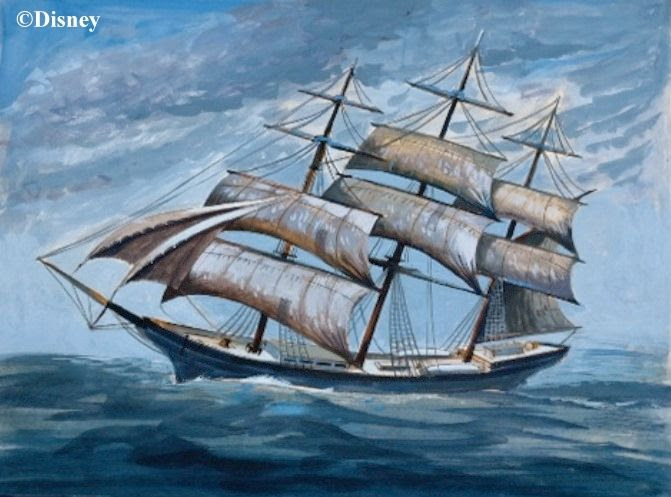 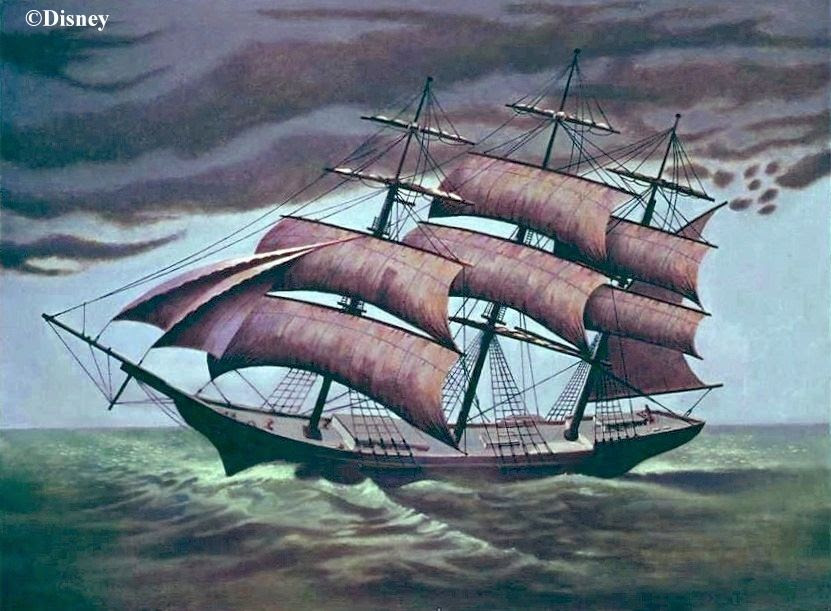 
Try to resist the temptation to obsess over color differences. Even under the best of conditions, it's risky to get too dogmatic about color when you're looking at photographic reproductions of artwork, and considering the varied and difficult pathways these pieces have traveled to get here before your eyes, I'd stay away from those types of comparisons if I were you.

Here's something else that's new. We should have been able to discover before now that Kohn reproduced at least three of Marc's original set, not just two, because it turns out that slides of both Kohn #1 and #2 were used in the Mansion at one time or another as "phase one" of the Flying Dutchman painting. Here's a shot taken at Disneyland in 1984 or 85 showing Kohn #1 in use: 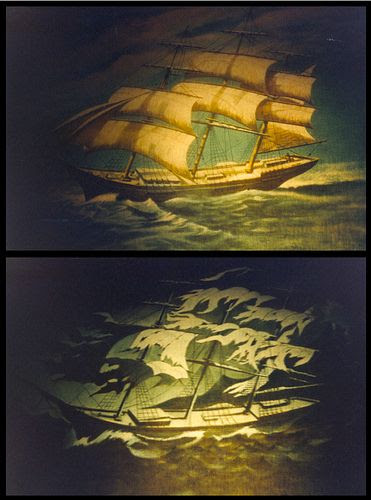 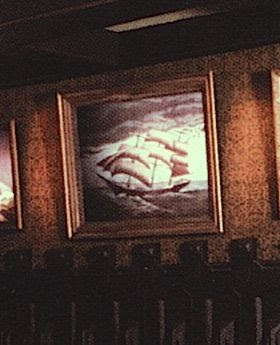 Based on half a dozen or so pix I've seen from the mid 1980's to the early 2000's, the
switch to a stormier first stage (Kohn's #2) took place about 2002, give or take a year.
(Is that when the slides featured in the Van Eaton auction were re-discovered? See the next post.) 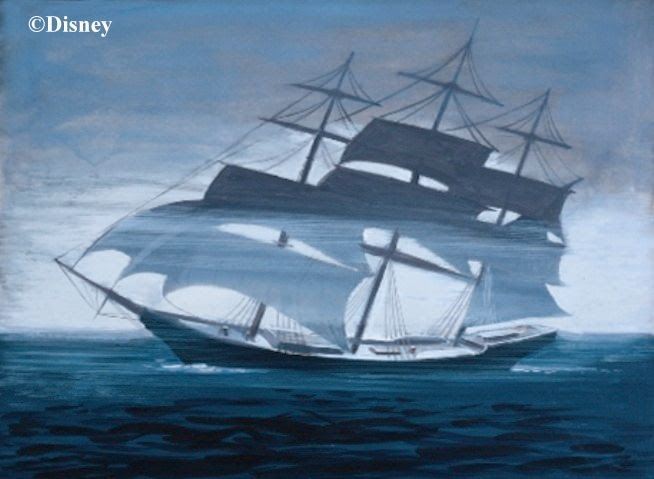 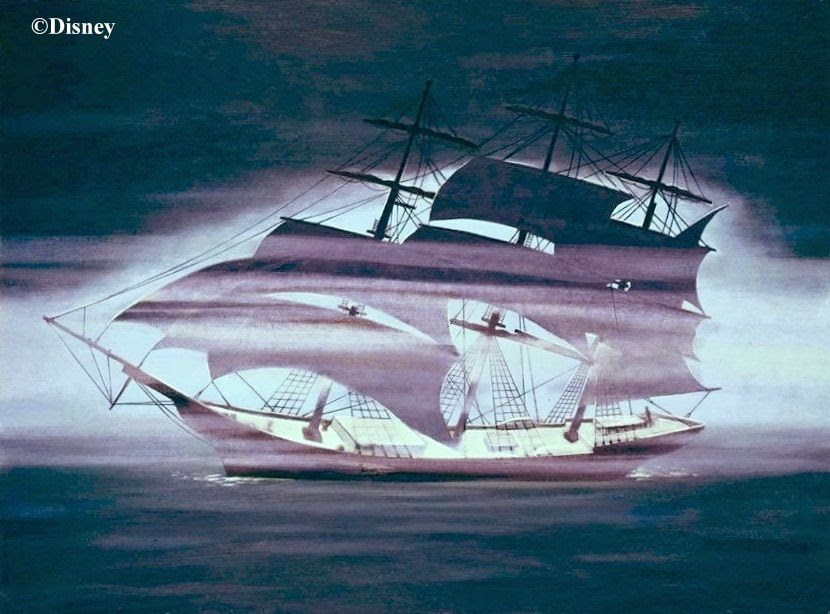 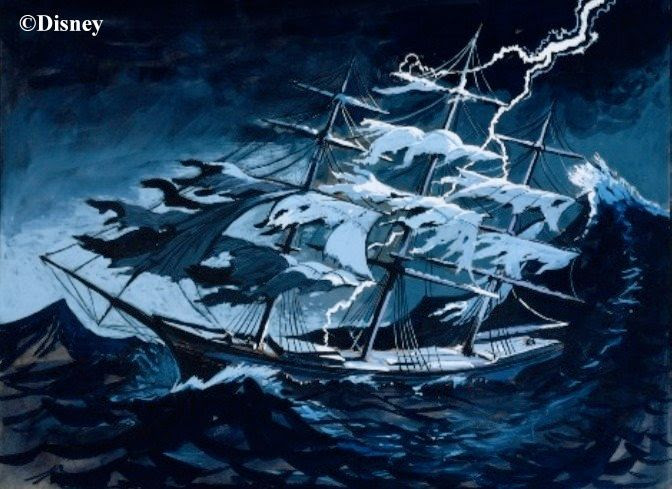 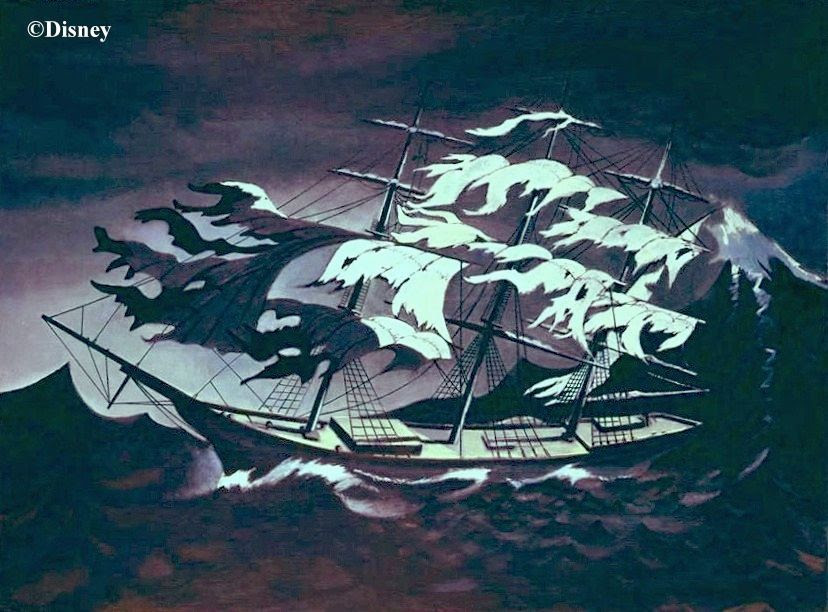 
This is the familiar "phase two" of the Dutchman on display for all those years in Disneyland's portrait gallery and
still closely reproduced in the current version. Notice that Kohn has eliminated the lightning in Davis's sketch
(with Marc's approval, one supposes). This detail may prove to be an important difference, as we will soon see. 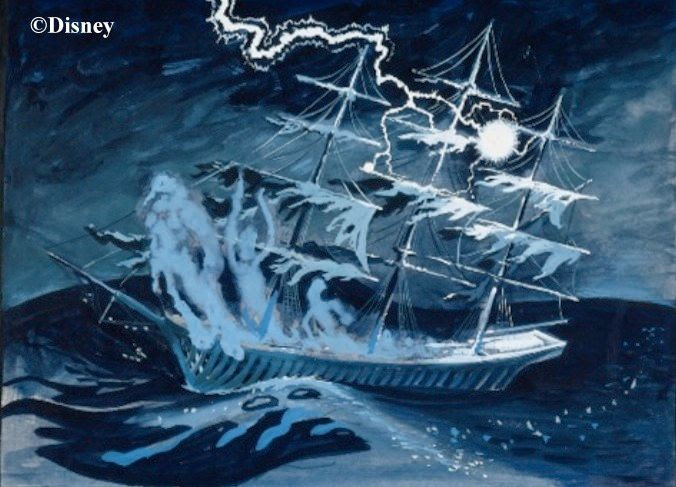 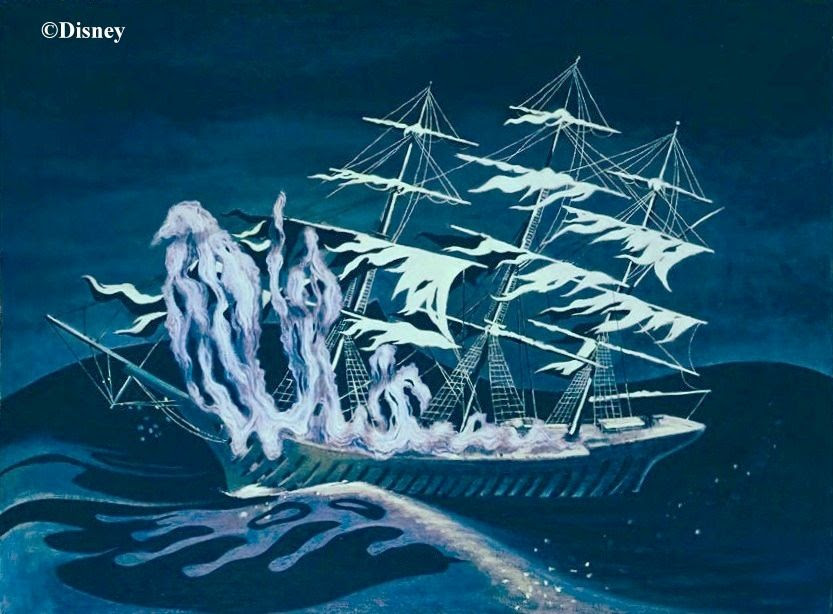 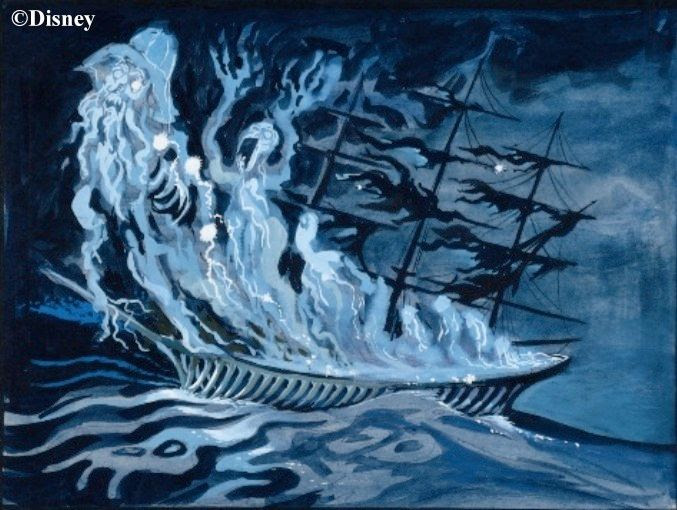 
And here's where the Van Eaton set ends! The photo of the slide of Kohn's
sixth painting is apparently missing from their set. What happened to it?


What happened is that someone spirited it away years ago, and eventually the picture found its way onto the 'Net. We've known for
some time that there is a second version of Marc's final panel out there, we just didn't know what it actually was: it's Kohn's version. 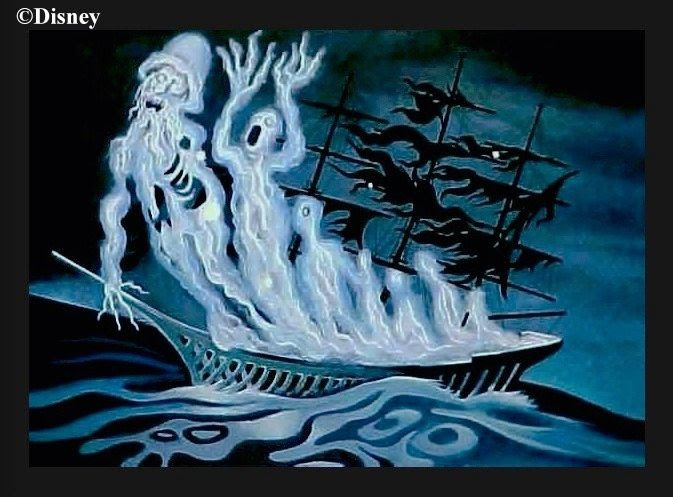 The giveaway is the missing lightning. In Marc's #6 the lightning and fireballs of #5 have made their way up inside the foremost ghost. Kohn does have plasma rivulets inside the ghosts, and he's kept the "St. Elmo's Fire" phenomenon too, but the distinctive lightning-and-fireball effect in Davis's foremost ghost has been reduced in Kohn to mere globules of the same general phenomenon you find in the other ghosts. That makes sense since he eliminated Davis's lightning strikes in #4 and #5. These multi-panel sets prove that there were indeed plans to use six-slide projectors at Disneyland at one point and that the Imagineers must have thought there was time during the show flow for that kind of presentation, far later in the game than previously thought. The next post will deal with the rest of the lost artwork going up for auction in November.