The Mystery of the "Original Bride" Photo (UPDATED!)

This post has been entirely redone as of June 9, 2020, thanks to a veritable avalanche of new data that has come out in the past week.

As mentioned in the old Beating Heart post, there is a shocking lack of photo evidence for the original attic bride in the WDW Haunted Mansion. To date we have three snapshots and one blurry film clip for her first 18 years of existence.

Or is there more? I'm referring to another photo, perhaps the most famous and mysterious of all attic bride photos. If you're a long-time Mansion freak, this is geeky, fascinating stuff, but if all of this is brand new to you, well, I can understand it if this little chapter of Mansion history doesn't really grab you, so go ahead and skip this post if you want. It's okay. I won't be hurt. 'Course, you're now off my Christmas card list.


This is the curious photograph that has long been one of those seemingly unsolvable Mansion mysteries.

Here's some background. Foxxy Hooves, of the Passport to Dreams Old and New blog and one of the best historians of the WDW Mansion, tells me that the photo may have made its first appearance in 1986, in Walt Disney World, a souvenir book celebrating the park's 15th anniversary. It continued to appear in subsequent editions of (essentially) the same book, and it can also be found, oddly enough, in a 1992 Euro-Disney souvenir book, evidence that its specific connection to the Orlando attraction may have been slipping away. 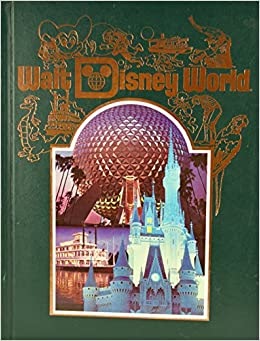 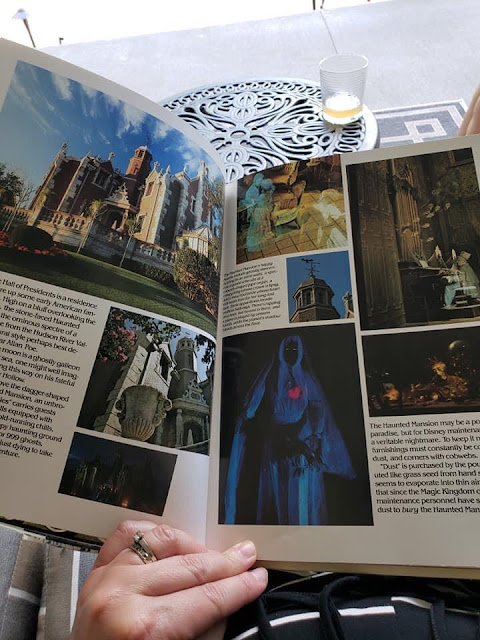 The photo has been reprinted and circulated widely, often accompanied by the claim (implicit or explicit) that it is "the original 1969 bride" at Disneyland. The oddest thing about it is the slit-like eyes. No other bride photo seems to show anything like that. We also know now that the original DL attic ghost was the "Corpse Bride" model, not this blank-faced one. And where's her head veil? And why does she look so junky? I mean, look at that bouquet and the hand holding it.

Foxxy has floated the theory that this might have been a prototype, not the production figure actually used in the ride, an explanation that has enjoyed a degree of support among those who actually care about such things. But no one knew for sure.


And then, out of the blue, a second photo came to light in May of 2020, found by
Brandon Hardy buried at an old, abandoned fan site not touched since 2002: 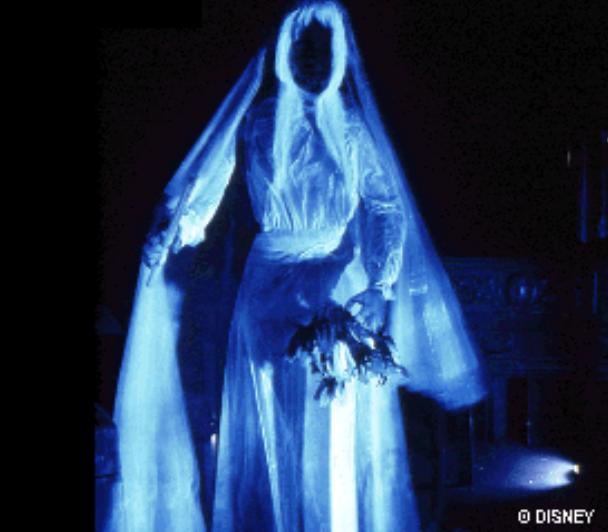 
My mysterious but highly reliable source, Lonesome Ghost, took note of the conversation and forwarded to me
some beautiful, high-rez versions of that one, plus the original photo, informing me that they are dated 1973. 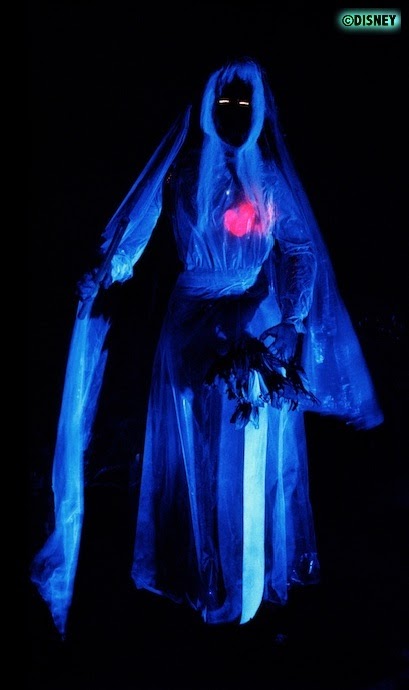 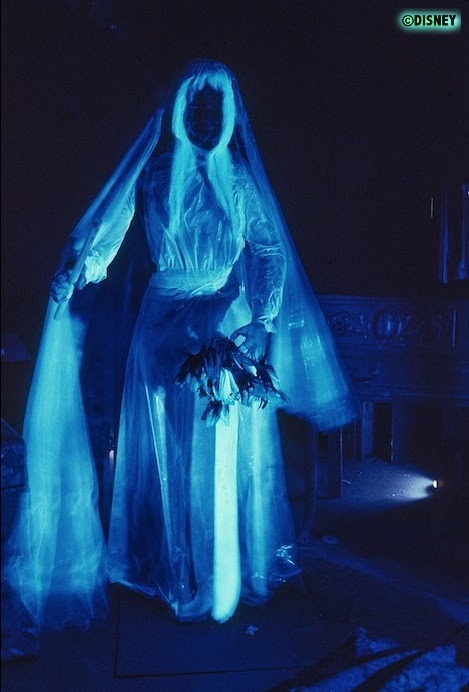 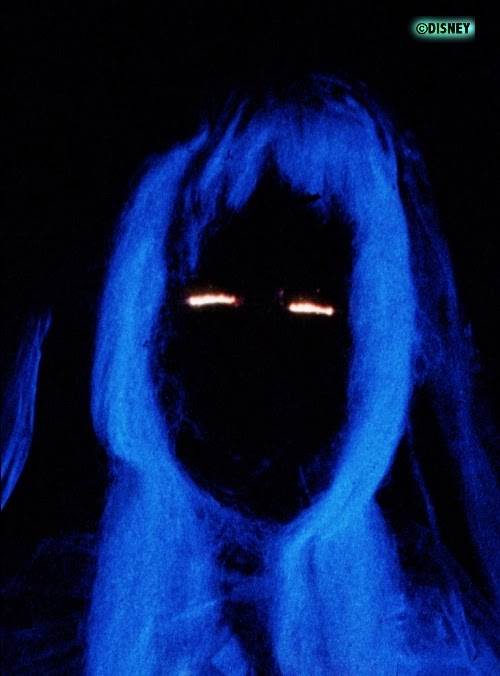 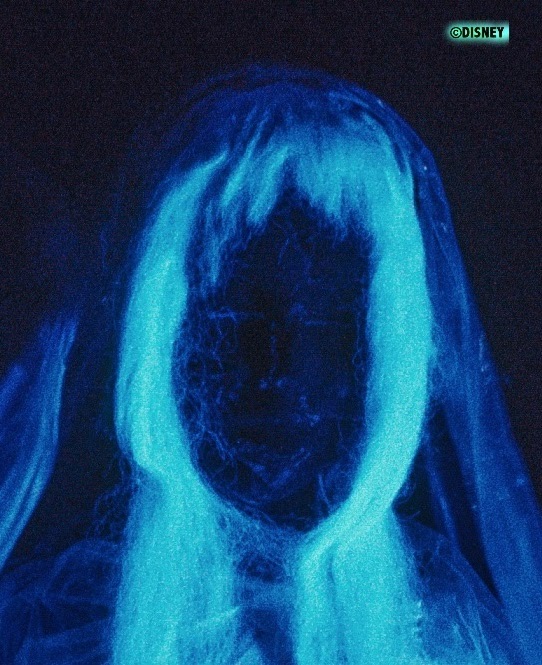 Close examination has shown that they are two different photos. It's not a case of the same photo with eyes and heart added to one copy. It does seem to be the case that they were taken with the same camera at the same session, however. Also, from the furniture in the room and the light fixture on the floor, there is now no doubt that this is some permutation of the Walt Disney World figure, in the correct and final position of the bride in the attic scene.


Wait, Another One? And Another?

As if that weren't enough, as I began to look through my pictures of the slit-eyed model, I discovered that even they are not all identical. The two below may look the same, but if you do the "magic eye" thing you'll see not a flat photo (which is what would happen if they were in fact identical) but a three-dimensional figure. It's very shallow, very subtle, and a little distorted, but unmistakable. That indicates a very slight and probably inadvertent movement either of the camera or the figure between shots. If you blow up certain areas you can see slight but real variation. 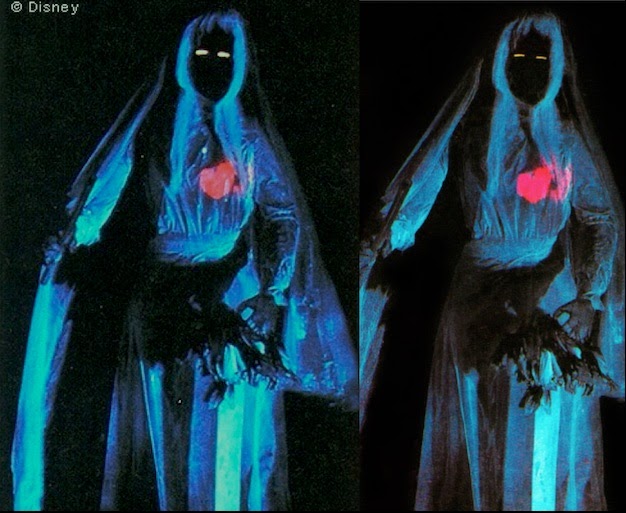 As I continued to compare copies, I came to the conclusion that I may in fact have three different versions of Ol' Slit Eye on my hands, plus the new blank faced one. Previously, I assumed like everyone else that they were all the same photo and was inclined to put down the obvious differences in the eye slits to the hazards of transmission to print. Now that I can see other differences between the photos, I'm inclined to think these eye-slit variations are genuine.


In the middle of all this craziness, what should pop up but a brand new shot of the bride.
My source for this nice copy thinks it should probably be dated 1974-76: 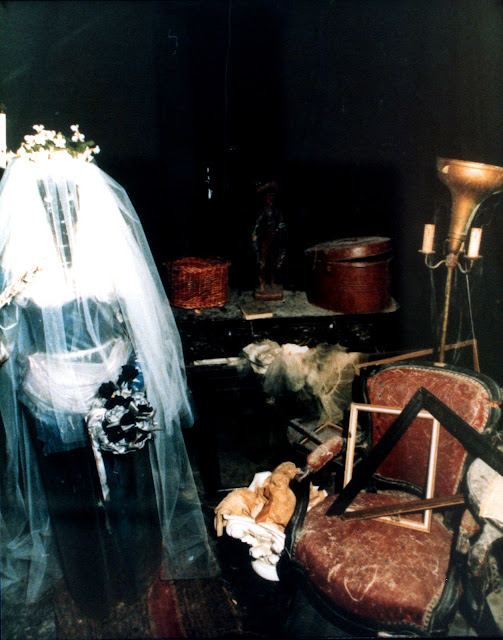 Wait a sec. She looks just like the bride as she appeared in the 1980s and 90s! This is getting confusing.

Our best clue for sorting out this mess is staring right at us: the props. In the above photo there's an oval basket, a "Huck Finn"-type statuette, and a metal hatbox on top of the desk next to the bride. It's amazing how stable those props remained. They are there, exactly like that, in photos of the bride from the 1970s right up into the 1990s. About 15 years separate these photos: 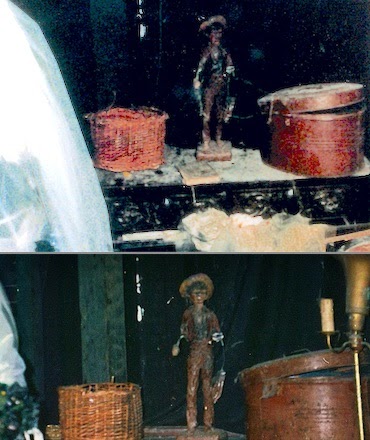 I've only seen two outliers. In the undated "Daveland" photo we see a bell jar instead of the basket: 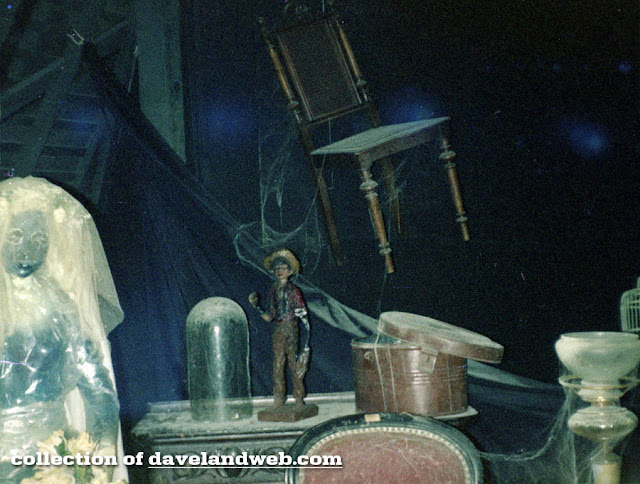 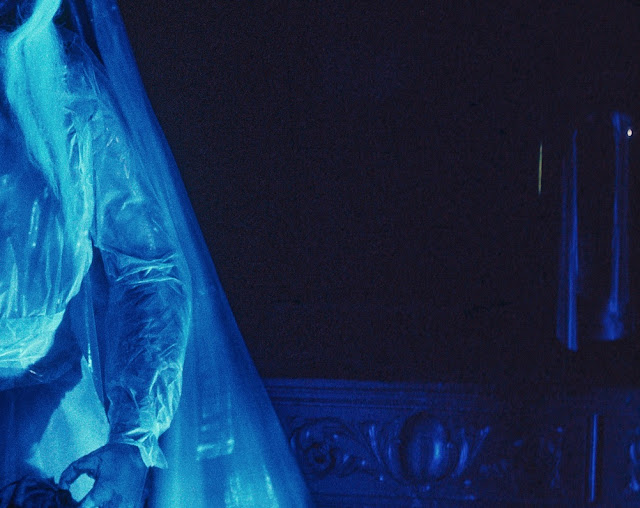 What we need is the simplest explanation that accounts for all the known evidence.
That's Occam's razor, dude, and that's how we operate around here.

The Daveland photo is likely the oldest photo of the WDW attic bride that we currently possess, showing that she was originally the "Corpse Bride" model, albeit a much milder version than the DL version. She probably had thin, slit-like eyes. The Imagineers must not have liked the look very well, because as early as 1973 they revisited and revised her. They opened up her eyes quite a bit and got rid of the Corpse look entirely in favor of a black, featureless visage. In doing so, they anticipated the changes made to the DL bride by several years. (It may be that they thought the reflections in the bell jar were distracting and replaced it with a basket at this same time, but that's pure speculation.)

At any rate, what we've probably got in these "Slit-eyed Bride" photos are pictures taken by WDI (then WED) in 1973 while they were reworking the bride's appearance. They set up a camera on a tripod, but that wasn't enough to ensure that very subtle movements might take place between shots, enough so you can tell that these pix are not all copies of a single shot. It looks like they darkened her face and experimented with how wide to make her eyes, click click click, eventually going for a fairly wide-open look. All of our other early photos of the bride date from after this, and there will be few if any further changes until Smurfette shows up in 1997, just some minor fiddling with her veil, her bouquet, and small details of her dress from time to time.

Despite the fact that the figure is obviously in an incomplete state in the "Slit-eye" photos, with her head veil missing and her bouquet out of position, to say nothing of the now-obsolete eye slits, some of the photos taken during the 1973 revision process were nevertheless appropriated for publicity purposes, and out into the world they went, baffling us ever since.

For an alternate view, see now Foxxfur's remarks in the Comments.


No One Will Notice

There's nothing weird about this, by the way. While they were building the Florida attraction, for example, the publicity people didn't always wait for stuff to be finished before grabbing pictures the Imagineers were taking and putting them in the papers. Hence, a number of widely used photos show unfinished figures. My favorite is a ballroom photo showing Granny still missing her wig. She's also got a piece of cardboard or something across her chest. Maybe she was missing more than her hair!

Birthday Gal is bald too. 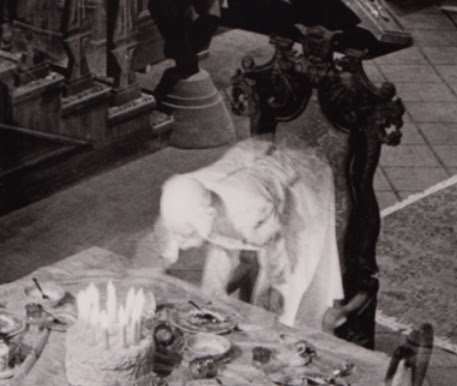 Other characters are not fully dressed. Pickwick, on the chandelier, is missing his hat. So is the
Organist, in a shot that nevertheless became a postcard. No cobwebs are a dead giveaway that this is
pre-opening. These and other pix got out and about before the figures were ready for prime-time.

So there's nothing strange to the idea that photos of a figure not quite show-worthy but of professional quality
and unquestionably creepy-looking should find service as publicity shots. After all, who's going to notice?


The Eyes Have It

If my historical reconstruction is correct, the WDW bride had slit-like eyes for approximately the first two years of her existence. Perhaps this design feature simply reflects the maquette figure, which also had slit-like eyes:

As it happens, the mechanical design of the lighted eyes allowed for any amount of manipulation of their shape.  You just mask the WALL -E eye box in her head (well, that's what it reminds me of) in any way you think appropriate and get any shape eye you want.

Beating Heart in Florida probably squinted at us in the early days.