Forgottenistas know that Frances Lichten's Decorative Art of Victoria's Era (1950) is one of the few books one may point to and claim with absolute certainty that it had a direct influence on the Haunted Mansion's Imagineers. We highlighted this book several years ago, on the occasion of our seventh anniversary, so go there first if you need to refresh your memory and want to see a lot of really neat pictures. I'll wait right here until you get back.

I ended that earlier post with a promise to comb through the book again for any additional points of contact, and like Captain Hook, your humble blog administrator always keeps his promises, even if it takes five years.

I've come back with four more items to talk about.

Only one of them represents a clear and convincing case of direct influence, but I can't take credit for that one. It had already been noticed by Foxx Nolte several years before our earlier post. However, Foxxy only mentions it more or less in passing, and it's buried deep in the bowels of a long post, without pictures or page numbers, so I suspect that relatively few Mansionites have noticed it, and even fewer have followed up on it to see if it's legit.

It is.  And it's high time it received the full LF treatment.  Everyone got their magnifying glass?

(1) Stop and Snag the Roses

The TOMB SWEET TOMB cross-stitch sampler in the Corridor of Doors sports an authentically Victorian rose-and-violet border design. You have to look close, but if you do you'll see that the floral design is the same in the DL and the WDW versions, even though the specific coloration of the flowers is quite different: 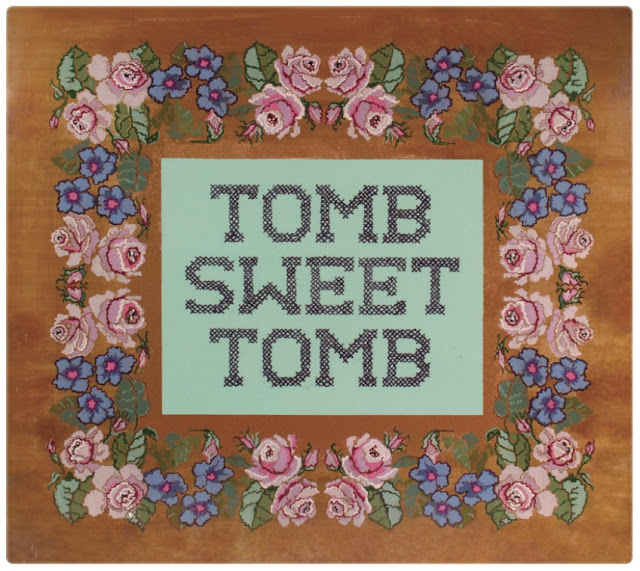 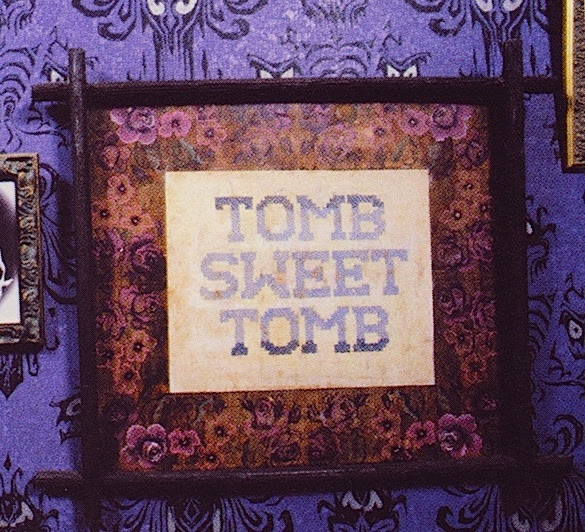 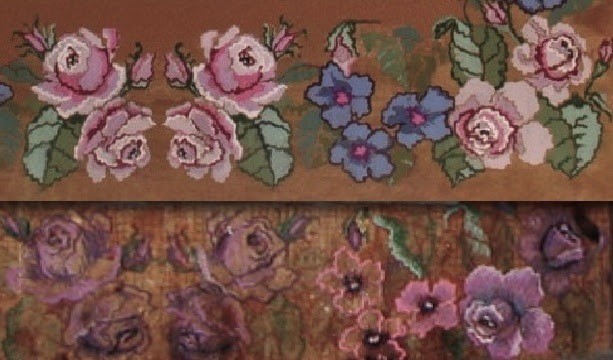 This exact needlepoint design is found in Decorative Art (p. 122). The fact that the photo is black and white might explain
why the coloration in the two Mansion versions doesn't match. Each could be a free attempt to colorize the b&w original. 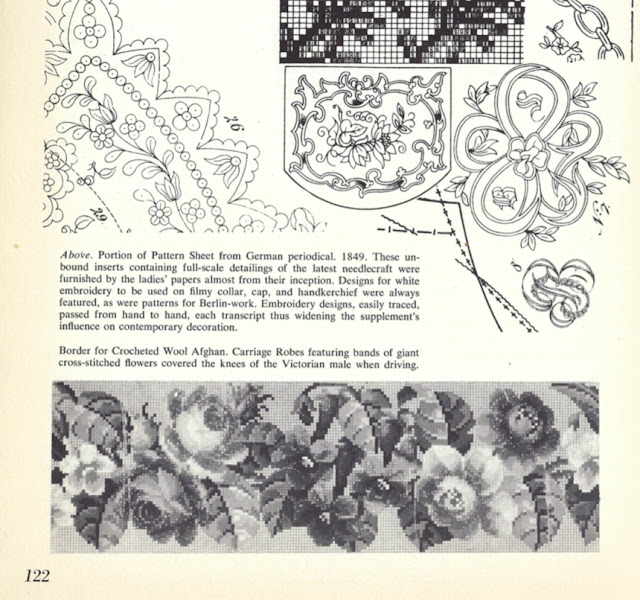 Side by side, to satisfy the skeptics among you: 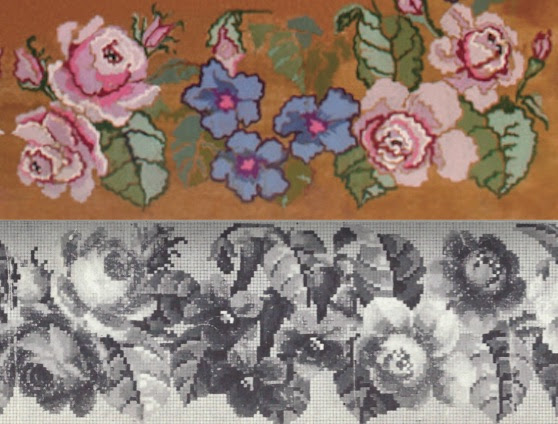 It is possible that the design seen in the Lichten book was (or became) so popular that the designer of the TOMB SWEET TOMB needlepoint copied it from somewhere else, but my own online snooping around suggests that the design is not a common one. In fact, I haven't seen it anywhere but in Decorative Art and in the Mansion samplers. And since Lichten was in the WDI (then WED) library and was certainly made use of by at least three different HM Imagineers, the simplest assumption is that it was the source of the needlepoint design. So I think Foxxy is correct, and we can safely add a fourth bullet-point to our list:
(2) The Coalbrookdale Benches
There is another suspected Lichten connection that didn't really pan out as hoped. It involved some outdoor benches at WDW: 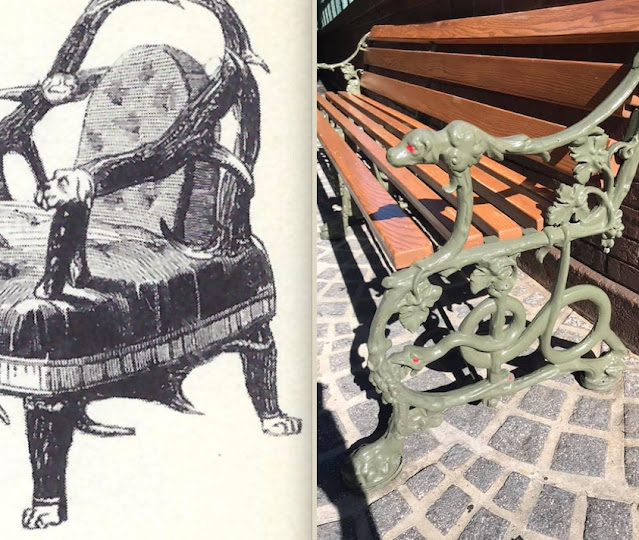 The bench in Lichten's book (p. 34) is part of a grotesque furniture set from Hamburg made with stag horns,
dated 1851. Note that it and the WDW benches not only have doggy armrests, but dog's paw feet as well. 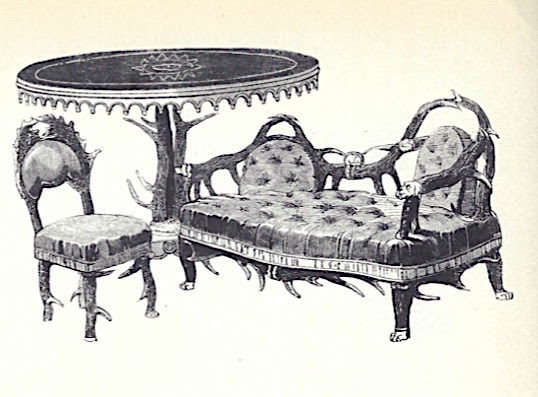 (Incidentally, I'm told that a guest put the red eyes on the dogs with some nail polish,
and the park liked the result so much that they've kept them red ever since!) 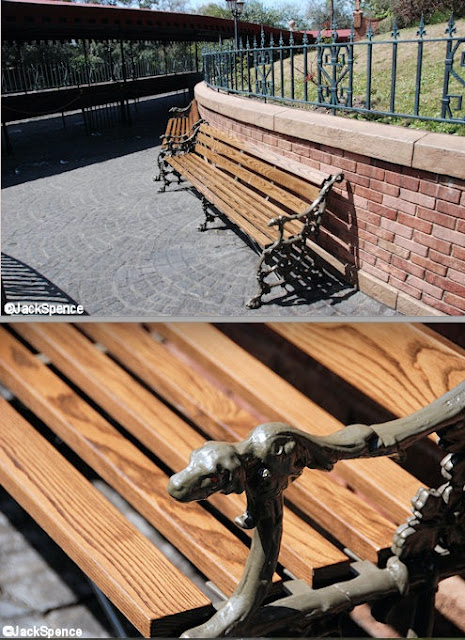 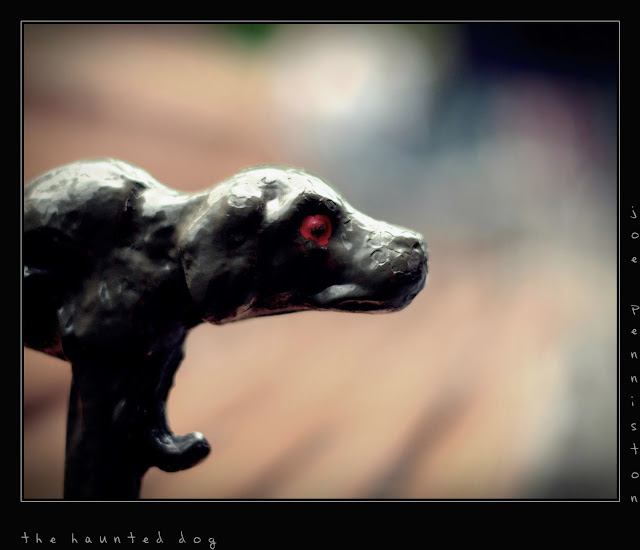 pic by Joe Penniston
But hold!  This bench end is not a Disney creation. It is a fairly common variety of Victorian-era,
COALBROOKDALE cast iron bench end, and authentic antique examples are not hard to come by. 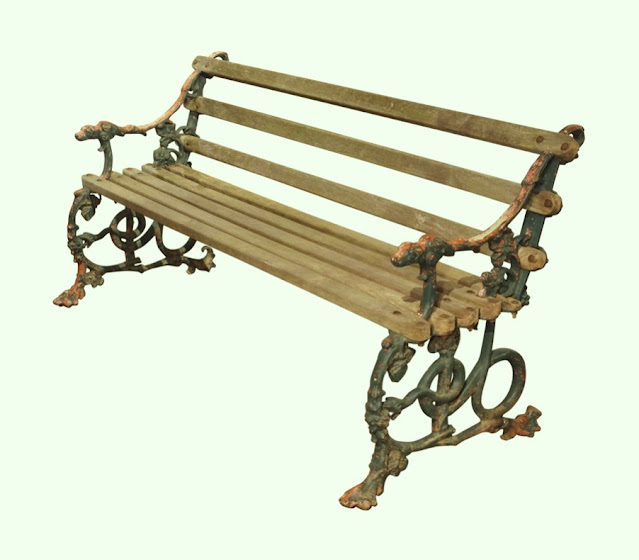 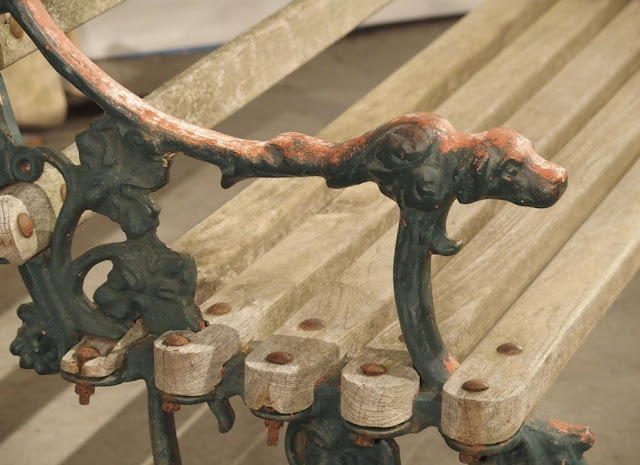 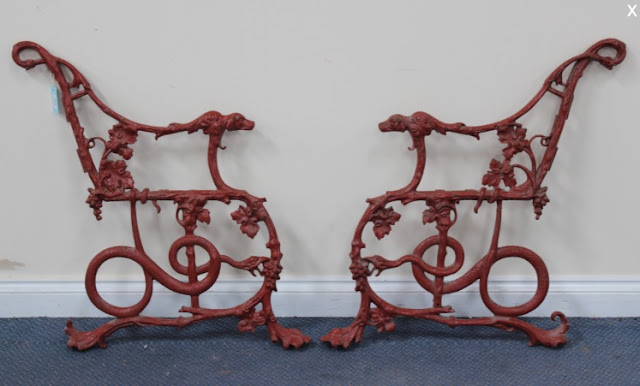 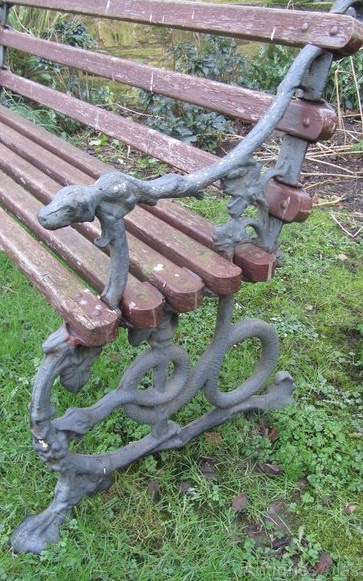 But before you walk away in disgust, you might pause and consider the fact that those ghastly and Gaston-ish staghorn furnishings we see in Lichten were popular in early Victorian England, so it's possible that the original designers of the Coalbrookdale bench ends, coming a little later in the Victorian age, were inspired in part by precisely the sort of thing we see reproduced in Decorative Art, possibly even by that very same illustration, found by them in the same source book where Lichten discovered it. In that case the WDW bench ends would still share a link with Lichten, if only in a derivative and roundabout way.
But even if there is no connection, this whole thing hasn't been a total waste: You
Floridian Mansionites now know how to correctly identify those über-cool benches.
"I just love the Coalbrookdale ironwork on these benches, don't you?"
( And boom, she's all impressed. Works every time. )
(3) Further Ironic Comments
Our third Lichten item is the pair of photos of the wrought ironwork on the porches of the Shipley-Leydecker house. Foxxy was sufficiently impressed with the resemblance to suggest that these photos directly inspired the ironwork of the Mansion. 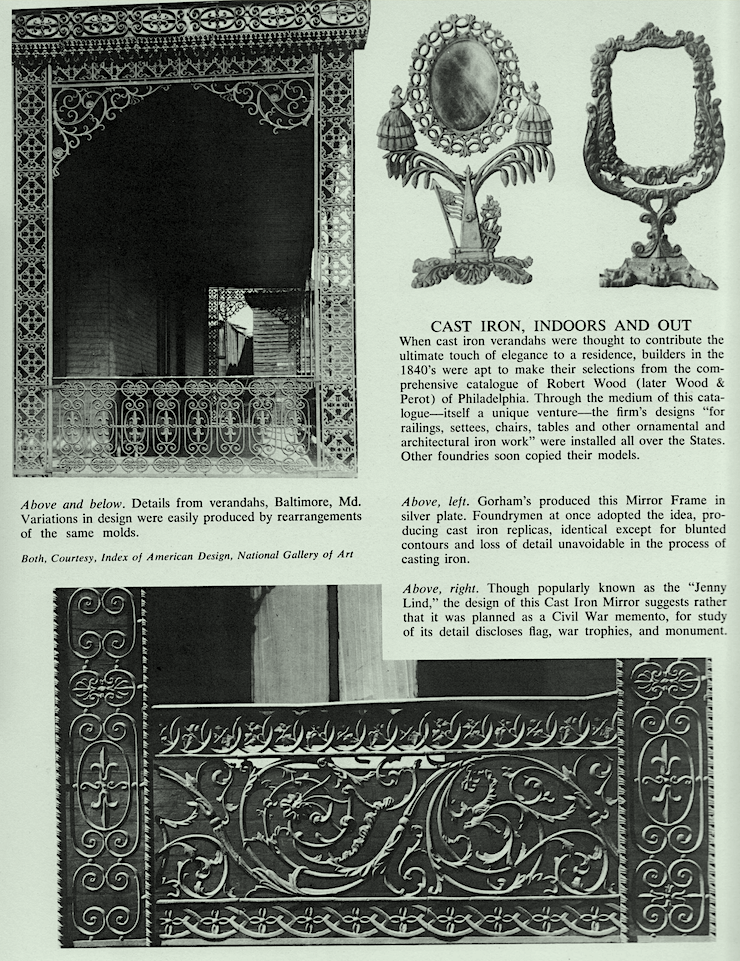 I'm not so sure. We already know that the Mansion's look was directly inspired by this photo
of the Shipley house, and you can see the basic design of the ironwork in it clearly enough: 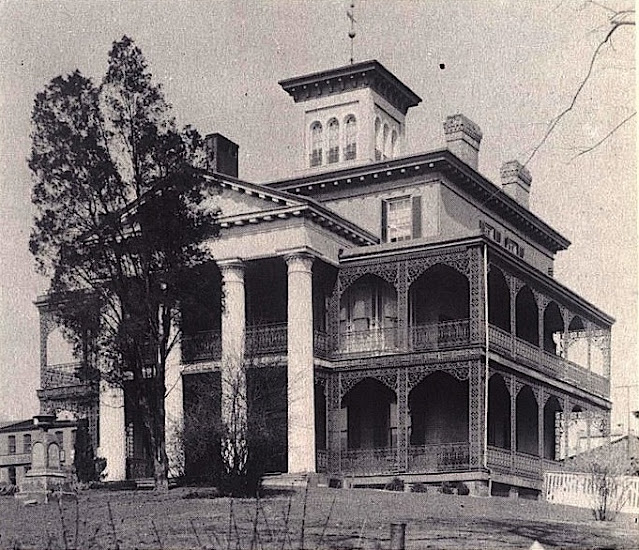 But up close the design is noticeably different from the Mansion's ironwork, so why would you suppose that in addition to the long shot, the close-up Lichten photos inspired the specific wrought iron design of the HM?  Side by side, the differences are as striking as the general similarity. 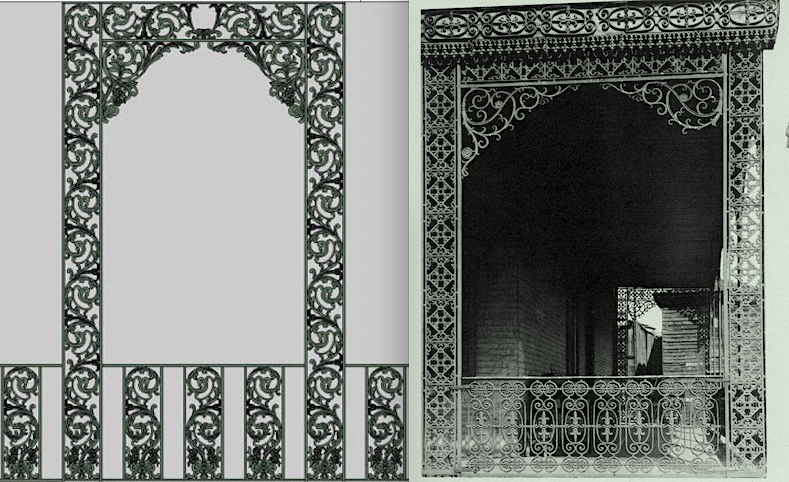 But then again, perhaps there is something to the theory after all.
As we know, the Mansion ironwork is an off-the-shelf design known as "Bird-of-Paradise." 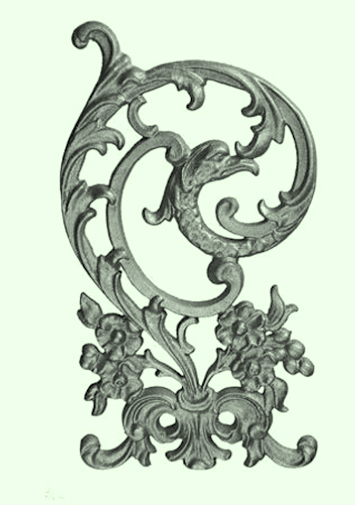 After looking more closely, I'm thinking it's not altogether impossible that the selection of Bird-of-Paradise over other choices may have been
inspired by one of the Lichten photos, which shows a somewhat similar zoomorphic shape at the Shipley house, unless it's just a trick of the light: 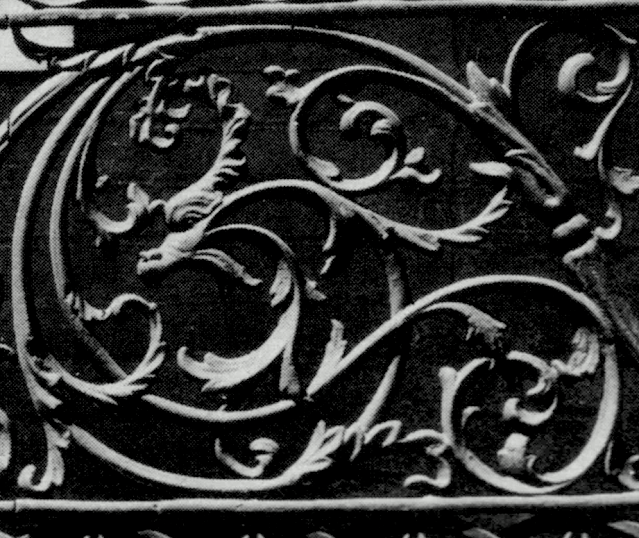 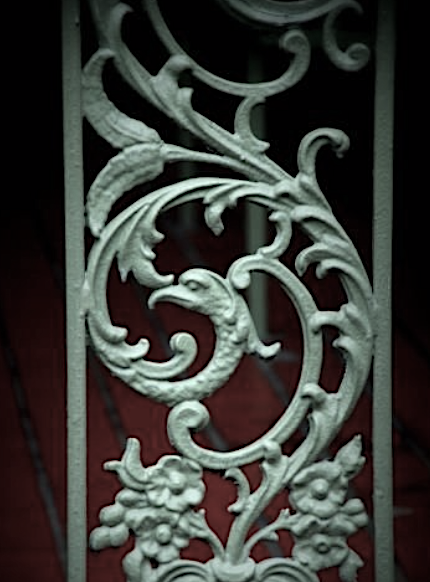 I think it's a coincidence.  But who knows?  Add it to the long list of Mansion mysteries we will never solve.
Lichten also has a photo of the veranda of another house, in Philadelphia (p. 106), and it's hard to deny that it has a similar feel to
the lovely south porch of the Anaheim Mansion. Whether that translates to "direct influence," you'll have to decide for yourselves. 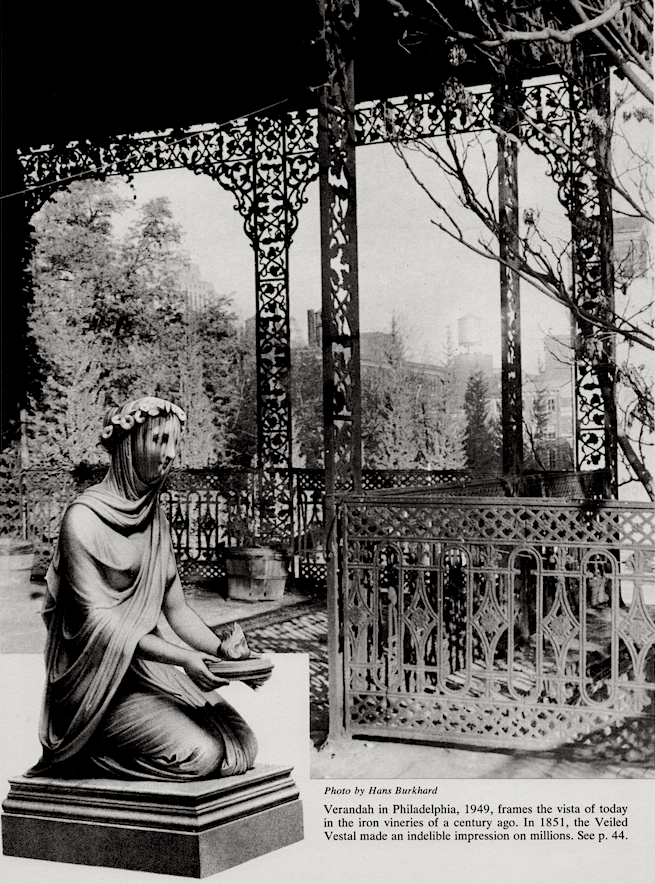 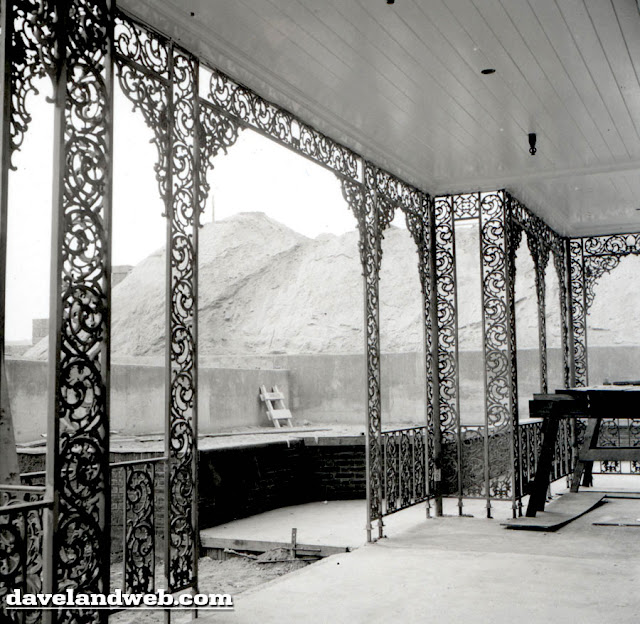 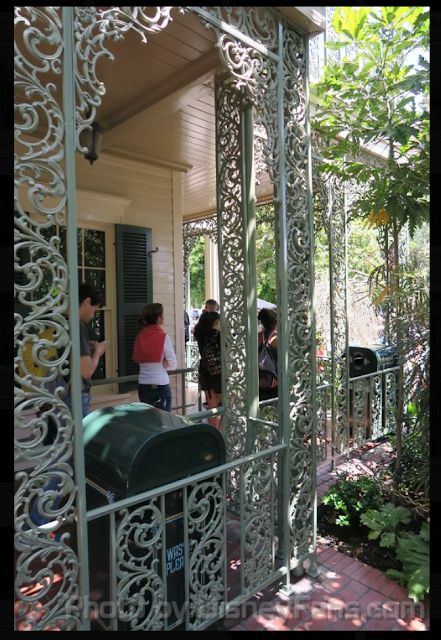 Allen Huffmann
(4) Last, if Not Leashed
One more, and then I think we can let Lichten rest in peace for awhile. In this case there's no suggestion of influence, but I think it's worth pointing out that Decorative Art furnishes us with a particularly good example of Victorian fondness for pet cemeteries. Someone grieved enough over poor Snow Ball to erect an impressive little monument. 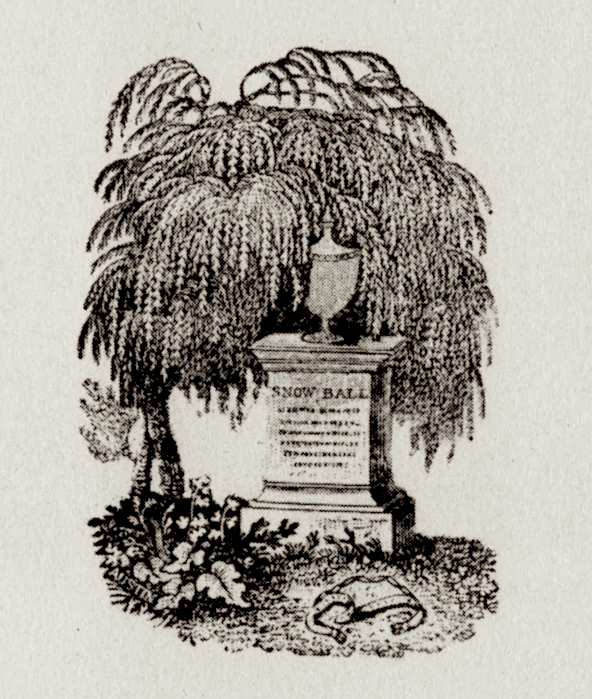 It's tiny and tucked into the corner of page 223, and no mention is made in the text
of the obvious fact that the decedent is a dog or a cat, so this one is easy to overlook.
It's also easy to imagine Snow Ball in one of the Haunted Mansion pet cemeteries; in fact, this could almost
pass for a concept sketch for one of the animal grave markers, don't you think?  Note the leash/collar on
the ground. This is definitely the closest real-world parallel to the pet cemetery markers I've ever seen. 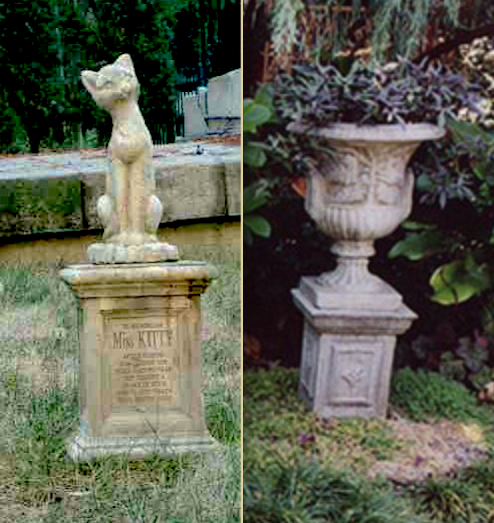