.
It's been a long time since the last post, but we are still here, folks. I just want to celebrate the completion of our NINTH year. Thanks to all of you. A special thanks to the newbies who have discovered our blog by one twisted path or another, even though it has lain dormant for so long.

I am retiring soon (from my job, not this blog) and am in the process of moving. When I break free and have more time to myself, I'll try to keep things livelier around here.

This year is of course the 50th Anniversary of the Haunted Mansion, and many of us plan to be there on the 9th of August. Perhaps I'll run into some of you readers there. I still look exactly like my profile photo, they say. Of course those same people say there are purple spiders coming out of the electric outlets and the Pope is out to get them.

As per our custom, the occasion calls for a Mansionistic tidbit. This year's example I owe to the mysterious Lonesome Ghost, who has supplied so many useful items through the years. Thanks, Lonesome.

One of Marc Davis's concept sketches for a changing portrait that never went anywhere is commonly called "the Stab," for obvious reasons: 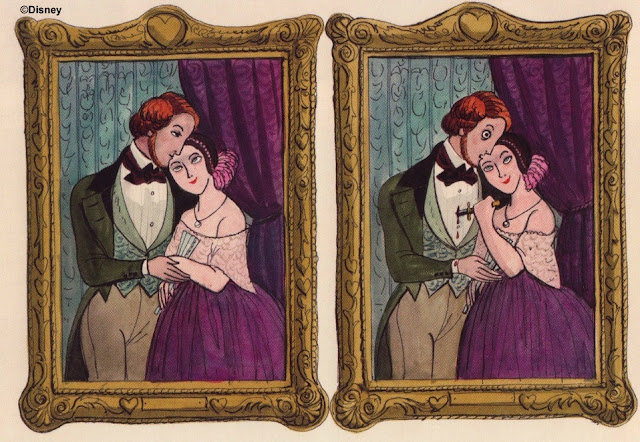 Well, as we have seen so often, Marc is here borrowing from a source, in this case a Currier and Ives print: 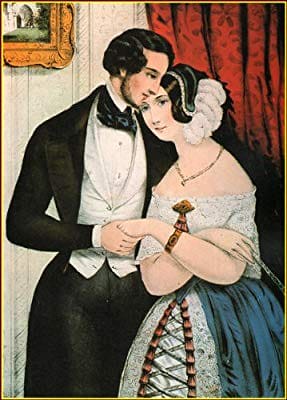 So it's another example of Marc riffing off of a known image, in this case wickedly reading murderous intent in this dear lady's so seemingly innocent eyes. You know, her face does seem to me to have an utter blankness about it, despite the Mona Lisa smile, that allows the viewer to imagine virtually any thought lurking behind it.

The thing that probably inspired Davis, however, is the ambiguity of the object the woman is holding in her right hand. It's probably a folded fan, but it could be a knife, right? And she's sorta holding it where he can't see it, right? All of a sudden the picture is funny, if you have a macabre sense of humor.

Imagineer Chris Merritt is wrapping up work on a major book about Marc Davis, so watch for it. I expect that it will have some interesting new information on his profound contributions to the Mansion. In fact, when it comes to importance, his only real rival is Ken Anderson.

I'll be working on a post or two about the other graveyards to be found inside Disneyland, a sort of subgenre that has developed around here since we did some well-received posts on Frontierland burial sites. And there may be Mansionistic news surrounding the 50th that merits our attention as well.

But for now, I'll disappear back into the shadows . . . I'll see you all a little later.