A 1973 Ride Through the Disneyland Haunted Mansion

.
(This is just a quick snack of a post to hold you over for the big one coming up next.)

In an earlier post, we dissected an audio ride-thru recording of the Disneyland HM from about 1976. Here's a recording made a few years before that. The quality is pretty good for a 1973 tape. My thank you to the responsible parties who made it available.


What can be said about this new tape? Well, it sounds a lot like the 1976 recording, not surprisingly. At least to my ear it doesn't really add any new information to what we gleaned from the other tape, so in that sense it's bound to be a bit anticlimactic.

Hey, it's good to have anyway.

Believe it or not, my biggest takeaway from this tape was the realization that people were just as rude back then as they are today, chattering and laughing throughout the Ghost Host's spiel and giving out obnoxious, fake screams in the stretching gallery. Gee, and here I remembered (or chose to remember) people as being a little more considerate back then, because every trip used up an E-ticket, and I figured that people would be less likely to squander a precious "E" by engaging in such antics.

But people are people.

Putting Sam McKim on the Map

There were a lot of major league Disney talents who worked on the Mansion project at one time or another while it was in development but who don't automatically come up in conversation like the Big Seven do (B7 = Anderson, Crump, Gracey, Davis, Atencio, Coats, and—if we remember that we have ears as well as eyes—Buddy Baker). At least, those are the Big Seven in my mind. Some would put Blaine Gibson on the short list as well. Note that I'm only talking here about the creative and conceptual guys, not the engineering and technical guys, many of whom deserve trophies of their own. Anyway, some of the talents on the creative and conceptual end simply didn't contribute material in sufficient quantity to make them haunted household names; nevertheless, they deserve recognition and appreciation if you're a Mansion fan. One of these is Sam McKim.

Quick on the Draw

If the name "Sam McKim" is not familiar—well, there's no point in trying to review his whole career here. That's what other Disney sites are for.
(I haven't counted, but gosh, there must be at least a dozen blogs and websites on the internet dedicated to some aspect of the Disney creative legacy.) McKim is a Disney legend. You can read about him HERE. More than one source claims he's best known for his huge souvenir park maps from the 50s and 60s, and for sure those maps are a source of endless delight. It was (and is) great fun to pore over them with a magnifying glass, discovering all the whimsical details McKim put there. There's a good article on these maps HERE.

It may be true that McKim is most famous for those maps among us old farts boomers, and Disney collectors know about them, but let's get real: His last DL map was done in 1964. I doubt that they are immediately familiar nowadays to anyone outside of Disney nerdist colonies. In contrast, McKim's Great Moments with Mr. Lincoln artwork once again fills the biographical slide presentation used for the Lincoln pre-show. (It was gone for awhile, but thankfully they brought it back.) That, I submit, is probably McKim's best-known work these days, certainly among the general public, and possibly among Disneyheads as well. (Why, yes, as a matter of fact, I will argue about anything.)

Sam was an amazingly detailed artist with wonderful architectural instincts. What strikes you about McKim's work is the strong, confident, free-hand draughtsmanship. In other words, that guy could really draw. His pencil and pen-and-ink sketchwork is always fresh and convincing. His subtle control of line weight was particularly fine. Could he paint? Sure, but many of his "paintings" are really only (superbly) colorized drawings.

There have been seven different renderings of the Haunted Mansion on the big souvenir maps, from the first one in 1958 down to the most
recent in 2008. The superb McKim sketch seen here graced the 1961—65 maps, and it is the only one that has ever been architecturally accurate.

Okay, what about the Mansion? Well, here's a pic of Sam as one of the onstage panel of Imagineers at the 30th anniversary celebration in 1999 (which incidentally was far and away the best HM Anny celebration to date).

I remember wondering what Sam McKim was doing up there alongside Rolly, Marc, Buddy, and X. At the
time, the only Mansion-related thing I knew about that Sam had done was this iconic concept painting:

As is now well-known, this is really an over-painting of a Ken Anderson sketch. For a long time it was believed that the following McKim sketches were his own original design, but nope, they too are based directly on Ken Anderson's concepts (with additional input from Marvin Davis).

You can see more sketches for this version of the Ghost House in this old post. For your viewing
pleasure, I'll add here a seldom seen version of one of those sketches before it was colorized.

As long as I'm plussing the old post, here too is a clearer, sharper image of
the Anderson-McKim house as it appeared on the fun maps from 1958, 59, and 60.


It wasn't until the last few years that I discovered how involved Sam was with what would go on inside the house as well. He went to the meetings, worked with the guys on the main team, and contributed ideas and artwork.

With some artists from the Walt era, there isn't much daylight between rough sketch and concept art suitable for framing. Even their "quick" sketches betray a slow hand and fussy attentiveness. Couldn't help themselves, I suppose. A temperament thing. Well, Sam McKim was not one of those. When he tossed out a rough sketch, rough is what it was.

Paul Anderson at The Disney History Institute has published some rarely seen concept sketches
done by McKim. This first one involves the doombuggies, so it cannot be any older than 1968.

Like I said, "rough sketch" means rough sketch with this guy. Here he's playing with the idea of having more than one
ghost interacting with guests, each trying to steal the show and pull the doombuggy in a different direction. Cute idea.

This next one was published today, March 3, 2020, at the DHI Facebook site: 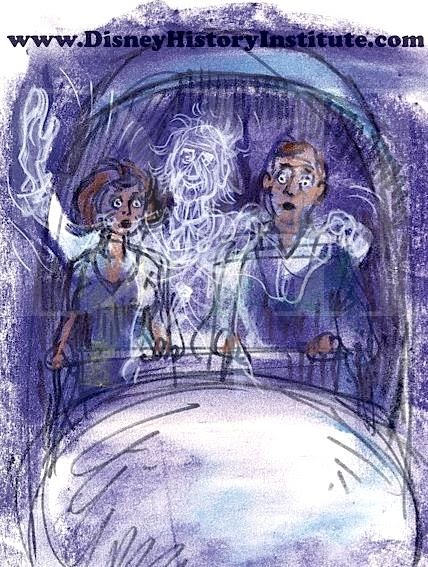 Mighty nice, and close to what we see in the final attraction!

It seems that the theme of "historical villains" was still alive in 1968, which is later than I thought. The ghost of
King John signing the ghost of the Magna Charta and offering you a souvenir pen as you go by? Um . . . okay.

Here we have a pilgrim still having trouble with injuns in the afterlife (no longer a PC gag, blah blah blah).
Third arrow goes right into the derriere. Butt jokes? Definitely Disney humor! I'm wondering what the
shovel is all about, though. It's not what I think it is, is it? That won't be Disney humor until UP.

This is my favorite of the four. The "historical villains" angle is still being used (Napoleon), but for this gag that context is completely unnecessary. The idea of a brush floating in mid-air and a hair-combing ghost visible in the mirror was actually used in the "special features" section of the DVD of The Haunted Mansion (2003), so unless this is a coincidence, it looks like at least one Sam McKim Mansion gag escaped from the drawing board and managed to find its way into public view.

Sam McKim clearly belongs on the map, but other than his stage presence at the 1999 Anniversary, has his contribution to the Mansion ever been acknowledged? Actually, yes, but just barely. There is a tribute to him at the WDW Mansion, although few people ever see it. There's a hallway used by the butlers and maids marked "Servants Quarters," and unlike most backstage areas, it's fully themed. I believe it's because the hall is used for wheelchair entry. On one wall is a bank of old-fashioned servant's bells. They're labeled "Ambassador Xavier's Lounging Lodge," "Madam Leota's Boudoir," "Grandfather McKim's Resting Room," "Uncle Davis' Sleeping Salon," "Master Gracey's Bedchamber," "Colonel Coats' Bivouac Berth," and "Professor Wathel's Reposing Lounge."

Those are obviously tributes to X Atencio, Leota Toombs, Sam McKim, Marc Davis, Yale Gracey, Claude Coats, and Wathel Rogers. With the exception of McKim, all of those Imagineers have tributes elsewhere, and some of them have several. Interestingly enough, when the new interactive queue of 2011 tried to ensure that any Mansion Imagineer who had never received a tribute finally got one, McKim was somehow overlooked. So it turns out that this servant's bell is the only tribute to Sam McKim at any of the Mansions, as far as I know, but hey, it exists!

It's past my bedtime. I'll write the conclusion to this
post first thing in the morning, I promise. Nighty-nite.

Good morning! What were we talking about, anyway?
Oh. Right. Sam McKim.

And so, in conclusion, while Sam McKim cannot truthfully be described as one of the major architects in the development of the Haunted Mansion, he was nevertheless part of the imagineering conversation from the beginning to the end and so deserves recognition for his various contributions to the creative mix, many of which we may never know about.

Our next post is a doozie, and McKim plays a part in it, so this post acts as a nice
warm up for that one. I won't tell you what it's about, but be sure to bring your galoshes.