.
A major boost to the theory laid out in this post was added in December 2013.  See below.
New artwork added in October, 2019.

In a blog post last year I discussed Marc Davis's talent for telling a funny story in less than a second.  Under most circumstances artists try to avoid clichés, but for this task stock characters and stereotypical situations are your best friends (although I have to say that even here it is remarkable how few truly stereotypical situations Davis uses).  Another friend of the quick-joke artist is ritual.  If you show characters involved in a well-known ritual (say, a wedding or a funeral), you have already incorporated a good deal of story before you've even begun.  The best example of this in the Haunted Mansion is the pair of duelists depicted in the grand ballroom's portraits:

Marc hit on the idea of a ghostly duelist quite early. This sketch dates to mid-1964:

But have you seen this one?

Think how much you "know" within half-a-second.  A gentleman of some social standing believes his honor has been slighted by another gentleman of about equal social station, and he has challenged him to a duel.  The other fellow makes no apologies and so accepts the challenge.  The time period is not modern, but 19th century or earlier.  The two men are somewhat stuffy, humorless characters.  In particular, they seem almost melodramatically sensitive when it comes to their personal honor.  You know all of this at a glance, because you know the rules for this particular ceremony, and you probably share the current perception about the kind of people thought to be attracted to it.  A dueling scene is a brilliant choice for a drive-by joke.

And what is that joke?  Obviously, the duel settled nothing and continues ad infinitum in the afterlife.  What was supposed to be the ultimate way of settling a dispute in fact ensured that the dispute would never be settled.  It has always been my opinion that the two shot each other dead, leaving no winner, and so the duel continues, stuck in an endlessly repeating loop.  I know that GRD thinks there is a real winner, based on a slight sideways head movement by one of the duelists at the end of the cycle, and others who have worked on the figures confirm that the little movement is there, but it's virtually undetectable to guests, and I'm not yet fully convinced it represents a bullet hit rather than drawing a bead.  What would truly settle the issue is if one of the two guns went off before the other.  The pistols have a special bulb for a barrel flash as well as a bang, so it should not be an irresolvable question.  Perhaps one of you Forgottenistas has an insider's familiarity with the shot sequence.

While we're snooping around backstage looking at light bulbs and head nods, here are a few fuzzy pix that some of you might find interesting.  Top left is the actual set up at DL.  Directly underneath them the doombuggies are scooting along the balcony.  Top right shows them in the shop, not long before installation in 1969.  The bottom row gives you some close-ups.  Center and right are the same character, one recent (center) and one old (right).  As you can see, they've done up his eyes a little differently over the years.  That's the Auctioneer's head from POTC, by the way.

There are more unsolved mysteries with the duelists than whether or not one of them won the duel.  There is also reason to suspect that they are not located where they were originally planned to be.  Much of what follows may be filed under "speculation," but hey, nothing wrong with that so long as you admit it.


It all begins with Collin Campbell's artwork for the "Story and Song" souvenir record album.

These lush, colorful illustrations are beloved by Mansion fans.  But despite their breezy, painterly quality, if you compare them to the corresponding Marc Davis concept art you find that they are extremely conservative.  Campbell stayed very close to his sources.  This is typical:

Now let's take a look at the Grand Ballroom illustration, which spreads across two pages.  The left side would be the place
you might expect to find the duelists, but they aren't there.  Balcony railing gingerbread obscures that portion of the wall.

But that doesn't mean that Campbell ignored the duelists.  Over on the right side of the painting is a
little surprise, something unknown until this artwork was re-issued with the CD version of "Story and Song"
in 2009.  The painting as it was known from the booklet in the 1969 record album looks like this:

But the same painting in the CD booklet looks like this:

It wouldn't be so odd except that Collins is so consistently literal in his reproductions of Davis artwork.  Putting a duelist on the wrong side of the room is a little bold for him.  Unless Davis also had the duelists on that wall in his sketches.  Is that possible?  Alas, we don't have Campbell's source art.  Well, okay, what's on that right-hand wall in the actual attraction?  The fireplace.  And above the fireplace is the Mantelpiece Ghost.

Funny thing about Mantelpiece Ghost.  He's missing entirely from the two Effects blueprints produced in the first quarter of 1969.  If that's just an oversight, it's odd that it happened not once but twice and was never corrected on the blueprints, which were repeatedly updated as they were used.  This would also be the only such erroneous omission on these blueprints.  Mantelpiece Ghost should be in the red circle on the left.

You can see him in a WDW blueprint of the same area:

Hmm.  Is it possible that the duelist portraits were originally going to be on the wall above the fireplace but were subsequently relocated, while a new ghost was put in that area, the Mantelpiece Ghost?  There's plenty of room on that big, blank wall: 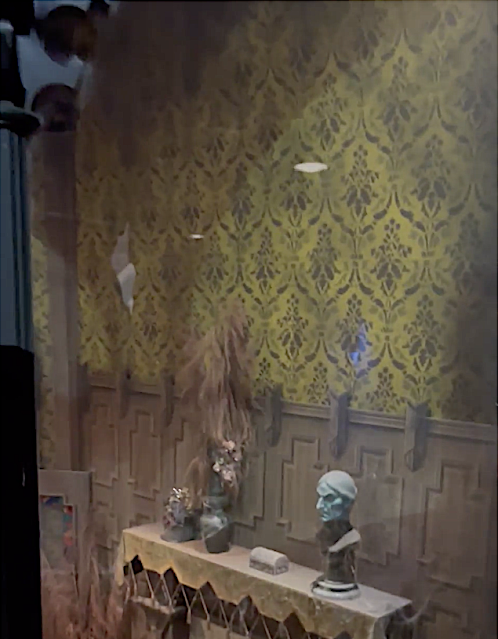 Complicating this theory is the fact that the duelists are right where they should be on these same blueprints (see the red circles on the right).  What may have happened is that they realized the duelists would work a lot better on the back wall, above the balcony, and they decided they would definitely move them there, even before they came up with something to replace them on the right.  That would explain the blueprints.  By this scenario, Marc Davis came up with Mantelpiece guy fairly late in the game, no earlier than mid-to-late spring, in fact.

There is a compelling piece of evidence supporting the theory just advanced: the figure numbers.  All figures in the Haunted Mansion are given a number like "F-12" or "F-39."  (The "F" stands for "human figure.")  Also, the Mansion is divided into numbered "Areas" and the figure numbers in each area follow the flow of the ride.  "Area 1" is at the beginning and contains only F-1 and F-2, the two hanging corpses in the two stretching galleries.  The list next moves to Area 6, the ballroom, where figures 3—35 are found, beginning with granny and ending with the second duelist.  Area 7 is the attic (F-42 is marked "omitted"; guess who?).  Area 8 is the graveyard, featuring F-43 (the caretaker) through F-75 (the beheaded knight).  Area 9 is for all the hitchhikers, closing out the list with the ghosty-go-round hitchhikers in the mirror (F-80 to 94).  Projected ghosts like Mdm Leota, the singing busts, and Little Leota are not included on these lists.

So where do you suppose the Mantelpiece Guy is?  He's tacked on near the very end (F-79), a conspicuously out-of-place Area 6 interruption on the Area 9 list.  That can only mean that he was a Johnny-come-lately, one of the last AA figures added to the ride.

The only AA figures later than Mantelpiece Guy are the hitchhikers in the mirror.  That's not hard to explain; we now know with certainty that they didn't show up until the last minute.