Clickbait title, I know, but actually, it's accurate, so why not?

Makes a pretty good trivia question, too. We have learned that the happiest place on earth has been home to an awful lot of graveyards, but a medieval torture chamber? Try this one on your favorite Disneyland trivia lover and see if they're stumped:

(You need to stipulate like that, because torture scenes there are aplenty. They would include dunking the mayor in POTC, forcing Wendy to walk the plank in Peter Pan, and the queue for Spider Man on a hot day.)

Some of the scenes in the older versions of Snow White's Adventures would have qualified, but those have mostly been scrubbed. If we're restricting ourselves to gloomy dungeons with implements of torture sitting around, then there is one and there is only one. It's in the Sleeping Beauty Diorama (aka the SB walk-thru). 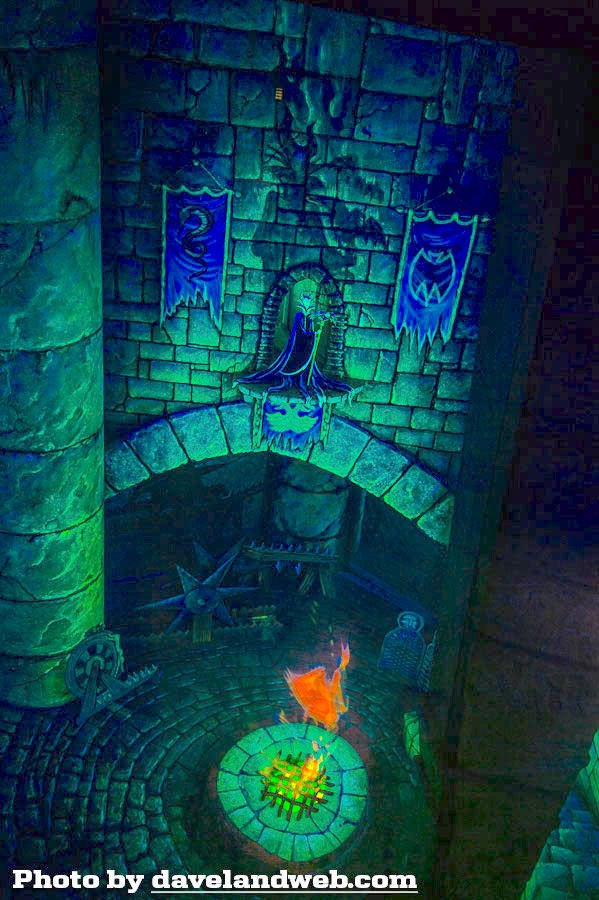 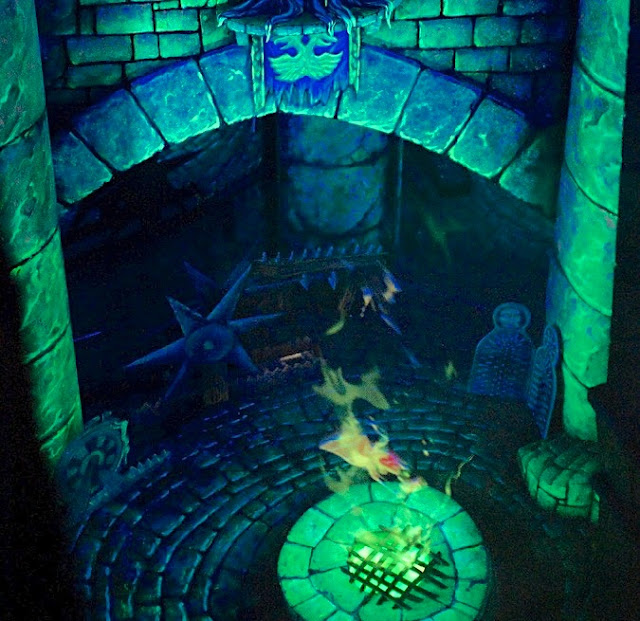 I ran some of what follows past good buddy Chris Merritt, one of the masterminds behind the 2008 version of the walk-thru, and he was so tickled by it that I was encouraged to go ahead and do a post. I'm going to label it an excursus, like I did with the Tom Sawyer Island graveyards, even though a slender case could be made that the ultimate source of inspiration for the scene above also left a mark on the Haunted Mansion. The connections are so pathetically weak, however, that I'm not going to pretend this is a legitimate Mansion post. It's an excursus into the roots of one scene in the Sleeping Beauty Diorama. I don't expect much blowback anyway, because Mansion fans tend to be fans of the Sleeping Beauty film and the walk-thru attraction as well.

There are plenty of good reasons for this crossover fandom, by the way. There's the Eleanor Audley vocal connection between Mdm Leota and Maleficent. There's also what we might call a common DNA to both attractions due to their mutual emergence from the imagination of Ken Anderson, who was in fact working on the earliest concepts for the HM and on the original SB walk-thru at the same time. 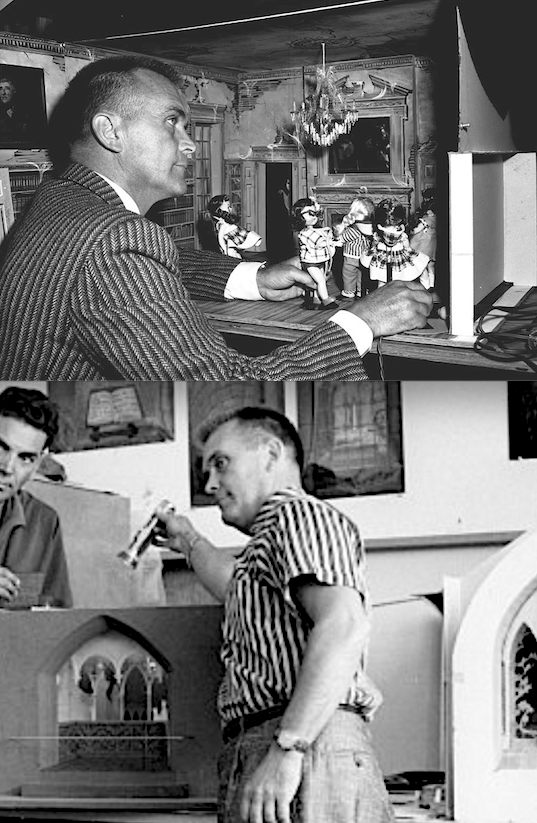 There is also the fact that the humble, A-ticket, Sleeping Beauty walk-thru was by far the most special-effects-laden attraction at Disneyland prior to the advent of audio-animatronics, and most of those same effects were heavily re-used in the HM (e.g. Pepper's Ghost, mirror trickery, lighting and shadow effects of all sorts, and ingenious use of forced perspective). This comes as no surprise, since special effects wizard Yale Gracey was responsible for much of the magic on display in the walk-thru, although he has never been properly credited for it.

For the "ultimate inspiration" promised above, we go back two and a half centuries. Meet Giovanni Battista Piranesi, a Venetian artist of repute: 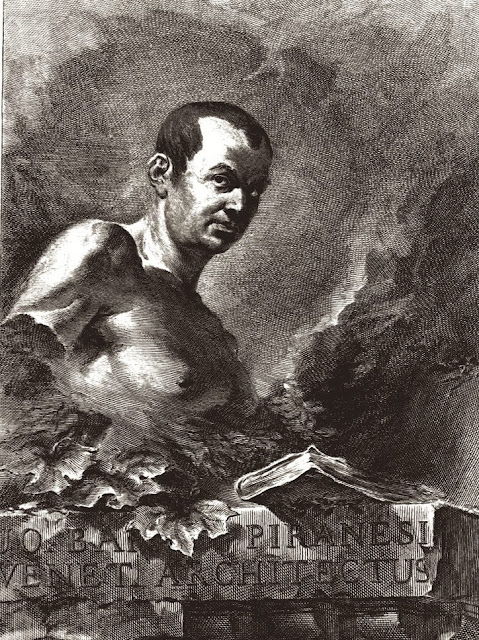 He did thousands of etchings. These could be mass produced and sold in portfolios at affordable prices. He was best known for his renderings of ancient Roman ruins and landmarks, done in realistic fashion but also with a heavy dose of romance and fantasy. The etchings were the 18th century equivalent of coffee table books, aimed at a middle/upper class clientele who would love to travel to see all these famous historical places but would probably never be able to do so. Some of his etchings became pretty well-known, like his rendition of the Pantheon: 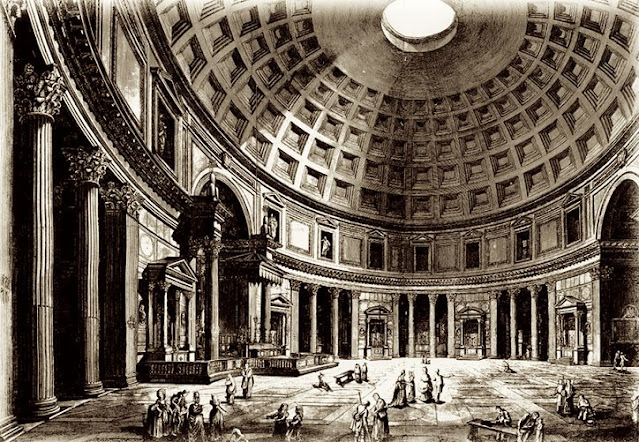 Anyway, according to one account, some time in the 1740's Piranesi fell ill, and upon recovery he began a series of etchings based on visions he "saw" while in a feverish delirium. Unlike anything else he had done, these were entirely imaginary. The series was called "Le Carceri d'invenzione" (Imaginary Prisons) and was published in two editions. We are concerned here with the second, 1761 edition.

The Imaginary Prisons set is widely admired and recognized as an important influence on later artists in the Romantic and Surrealistic schools. They are indeed pretty amazing. I think there is good reason to think that Ken Anderson laid them under contribution when he designed Maleficent's dungeon for the SB walk-thru. 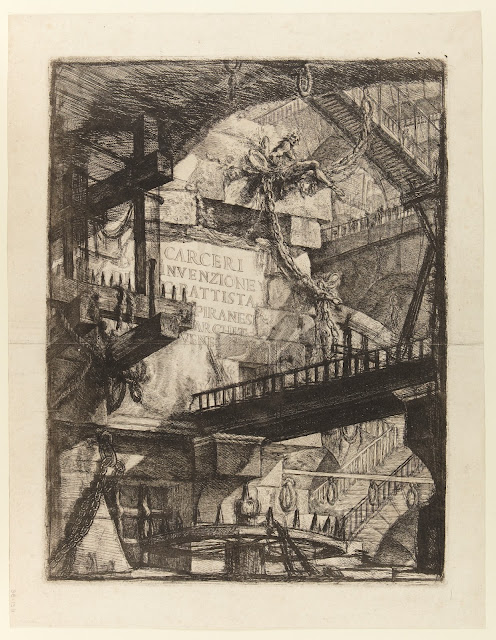 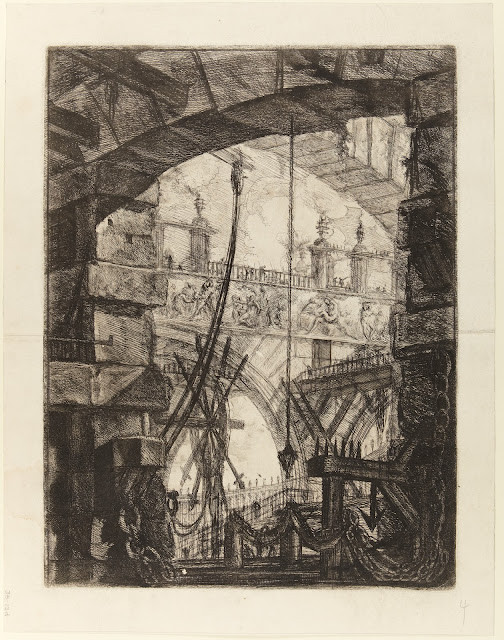 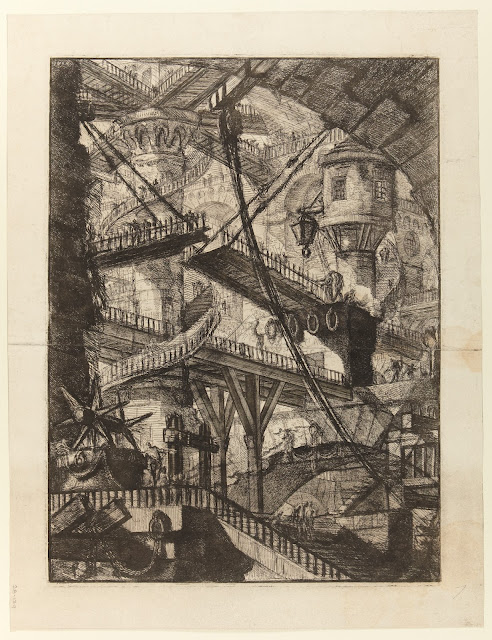 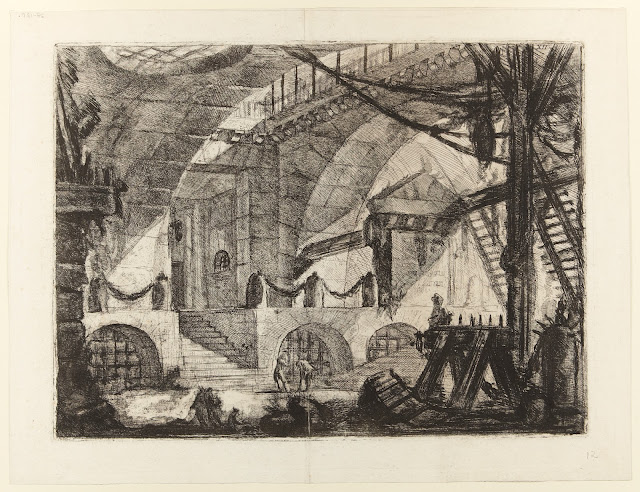 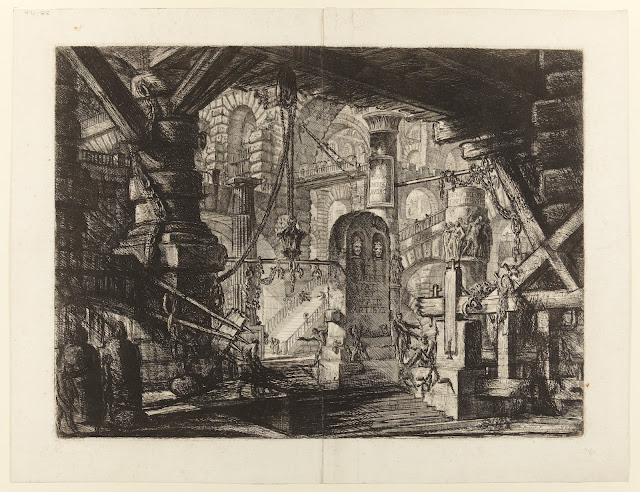 You can see the entire set of 16 prints HERE. They're all good.

The Sleeping Beauty movie did not come out until 1959, but the walk-thru attraction opened in 1957, while the film was still in development. That's why the original diorama contained scenes that never appeared in the movie. Eyvind Earle did a concept painting of Maleficent summoning her demons for a celebration. This is not a concept for the movie but for the walk-thru: 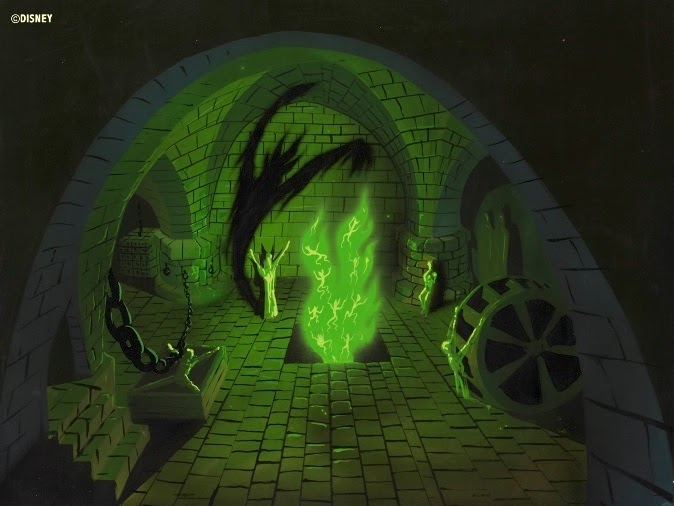 I don't see much here that looks like it could have been inspired by Piranesi, unless the coffins (or are they iron maidens?) in the corner were inspired by these, which are equally ambiguous as to what they are. 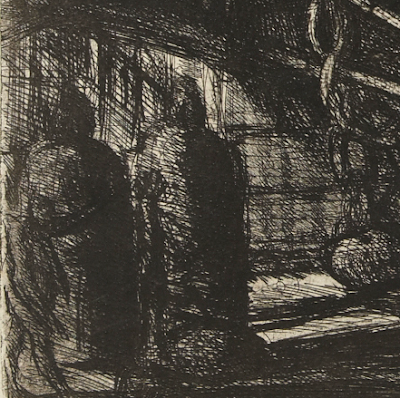 If we want to hunt down possible influences on the Earle painting, I think there are better candidates elsewhere: 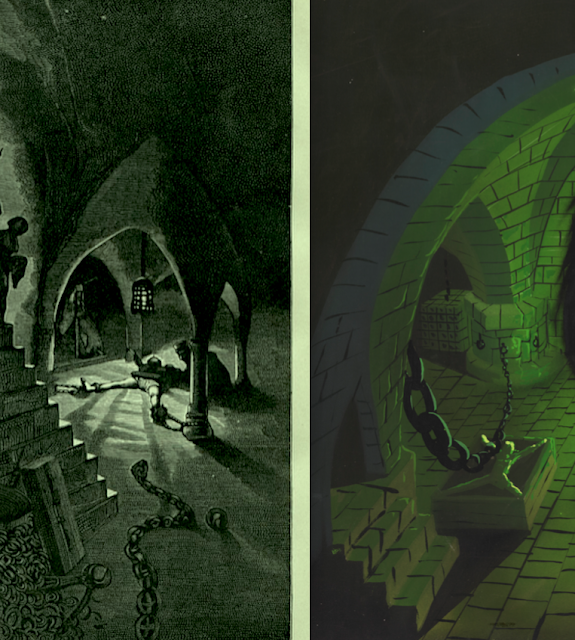 But never mind Earle. It was Ken Anderson who designed the actual scene in the walk-thru, including all the torture implements. The original was revamped entirely in 1977 (the wretched "Barbie doll" version), and that one closed in 2001. But the current incarnation, which opened in 2008, tries to adhere as closely as possible to the look of the Earle-Anderson version. We actually have a pretty good idea of what Maleficent's dungeon looked like in 1957 (here recreated by Chris Merritt): 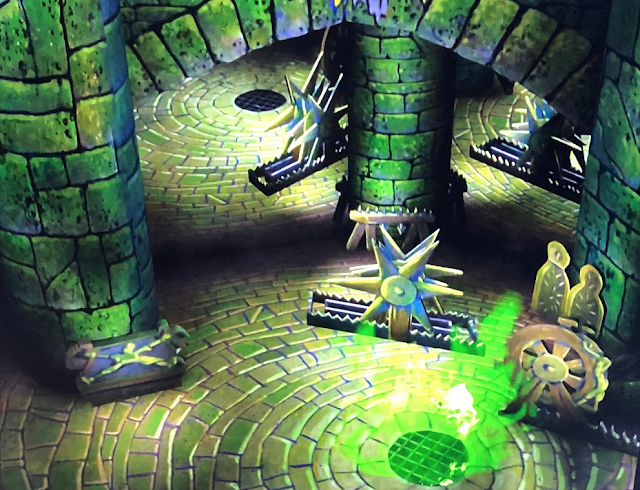 Amazingly enough, even though interior photos of the original SB walk-thru are EXTREMELY RARE, a photo of precisely this scene came to light just last year, posted by Mark McGuire at the Vintage Disneyland site on FB. It took a little knob-twiddling to improve the readability of the photo, but there's been no fiddling with the contents, I assure you. The pieces seem to have been moved around. 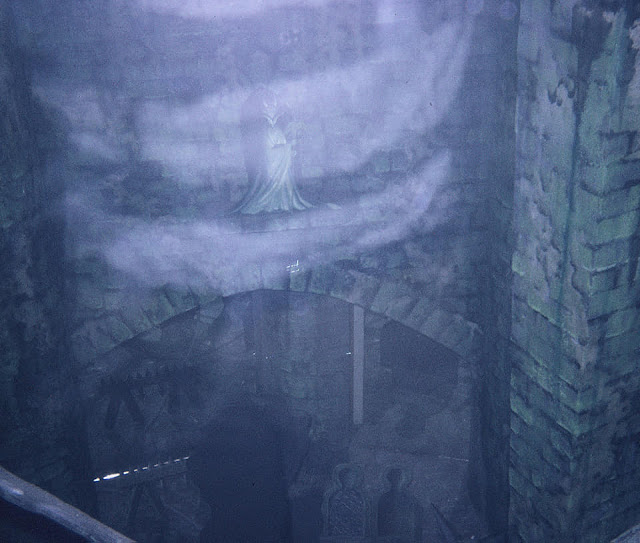 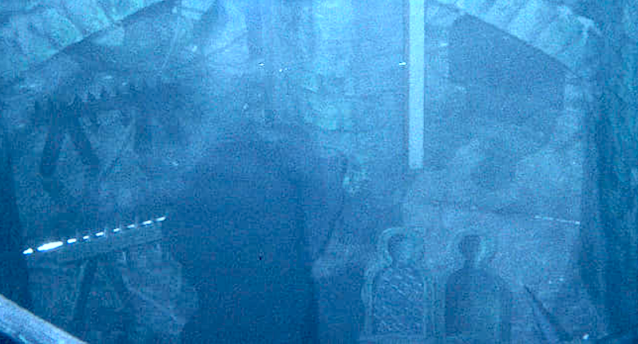 Besides all this, I've seen Anderson's blueprints for the dungeon furnishings (but I can't show you them). 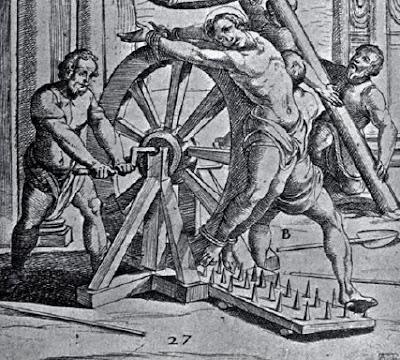 But the weird "star wheel" and the spiked sawhorse with descending arrow points in the middle certainly came from the Imaginary Prisons. 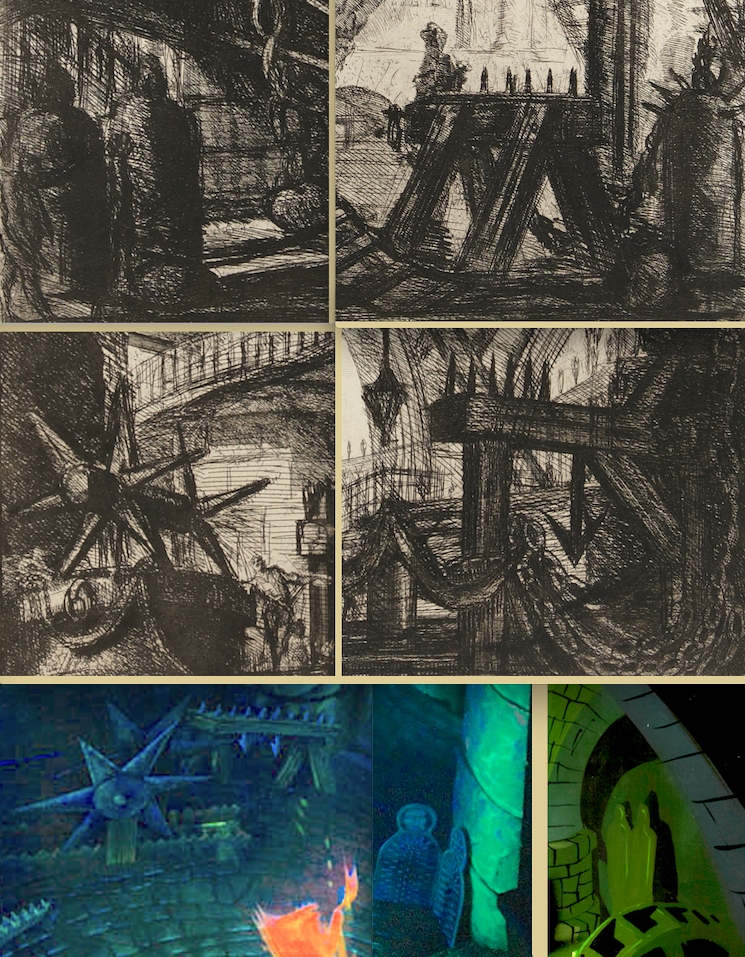 The catwalks too, I think. Ken needed something to disguise the top edge of the glass pane slanting across the stage, and now that it seems certain he took ideas from Piranesi, we're probably safe in concluding that he took the design of the catwalks from there as well. 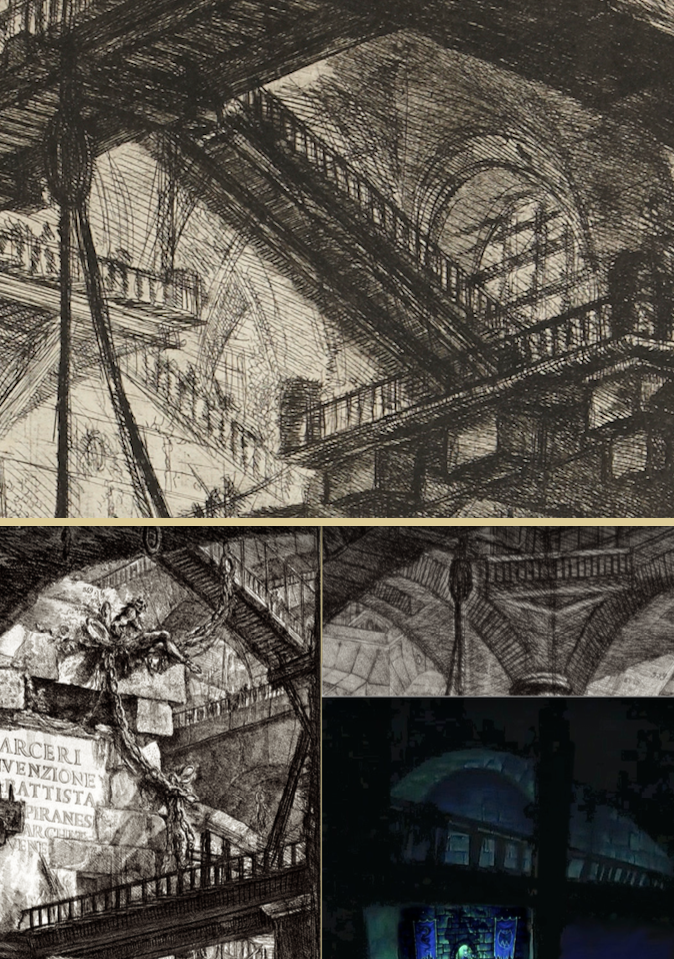 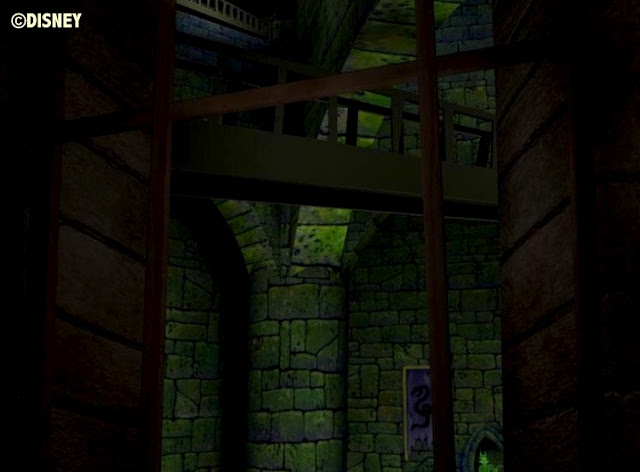 The Big "So What" Moment

To me, the most interesting thing in all of this is that the actual function of the borrowed devices is unclear. In fact, even though Piranesi's prisons are full of what are obviously implements of torture, it's not at all clear what they are or how they would have been used. They are wholly imaginary, perhaps the product of Piranesi's delirium, and it's apparently enough that they look like scary torture devices, even if they are ultimately indecipherable.

I wonder if that very fact may have been the thing that attracted Anderson to them. This is a Disneyland attraction, after all, and this is a scene in a fairy tale. How many historically accurate torture devices do we really want to put in this tableau? Wouldn't it be better to put in something more suggestive of a torture chamber than a literal reproduction? It's enough that that wheel and that rack (if that's what it is) are included. Maybe Anderson welcomed the opportunity to introduce items that were deliberately much vaguer, things less factual and more fantastical.

Merritt was particularly pleased by the Piranesi discovery, since neither he nor Tony Baxter had any idea what these crazy things were, and they decided to simply follow Anderson's blueprints as slavishly as possible, all the while wondering what the hell they were making.

Almost none of this survived into the movie, although if you're paying attention, you'll notice a chopping block in Prince Phillip's cell. It made a good perch for Diablo, but that seems to be all that's left of Maleficent's torture chamber. 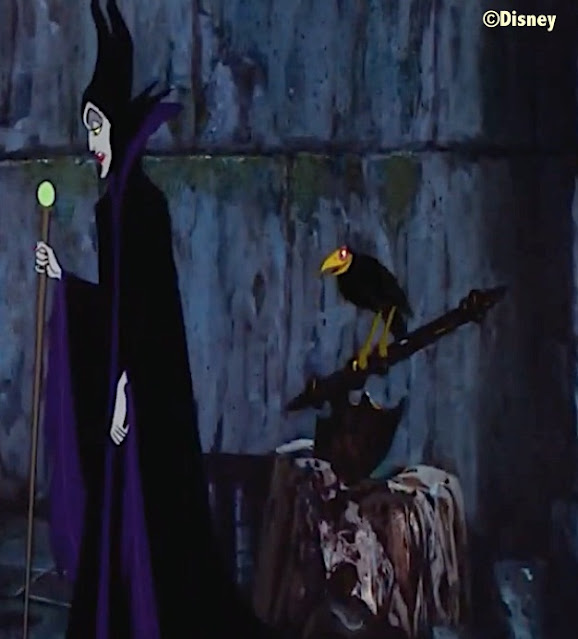 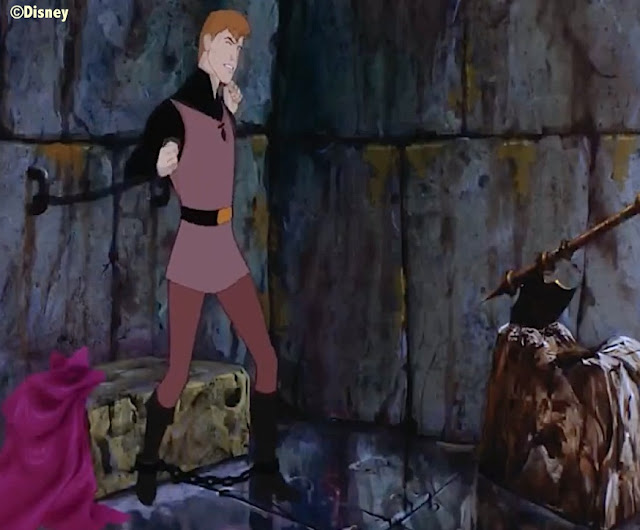 It has been noticed that the 1761 edition of the Imaginary Prisons set incorporated here and there what look like "impossible objects." 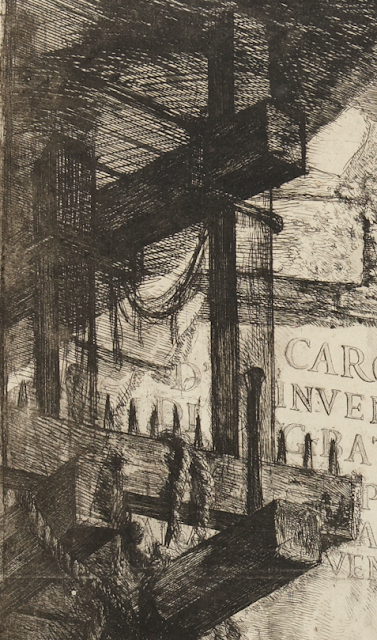 Not surprisingly, it has been suggested that Piranesi was an influence on M. C. Escher. These are often compared: 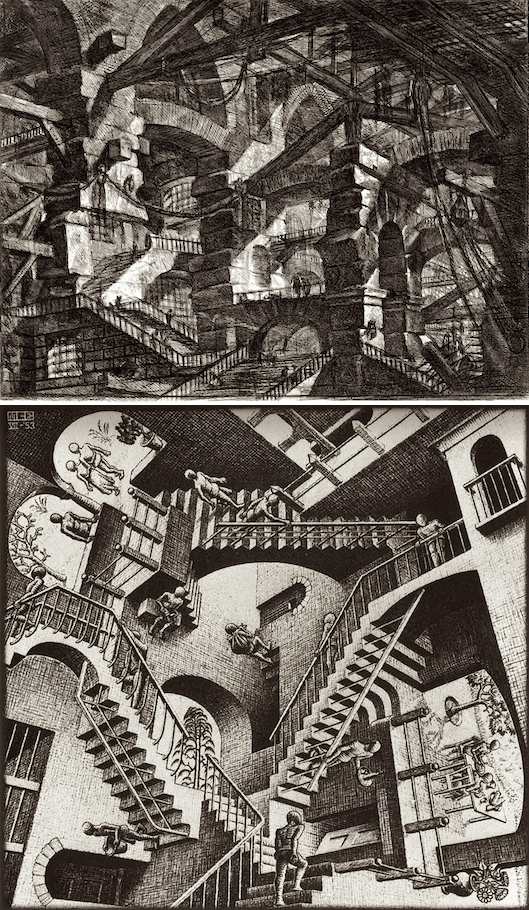 Since that particular Escher piece is the obvious inspiration for the WDW HM "Grand Staircase" scene, Someone might argue for a connection here between Piranesi and the Mansions at second or third hand.

I think a slightly better case may be made that some of Nathan Schroeder's concept art for the 2003 Haunted Mansion movie could have been inspired by the Imaginary Prisons artwork. Here's Schroeder: 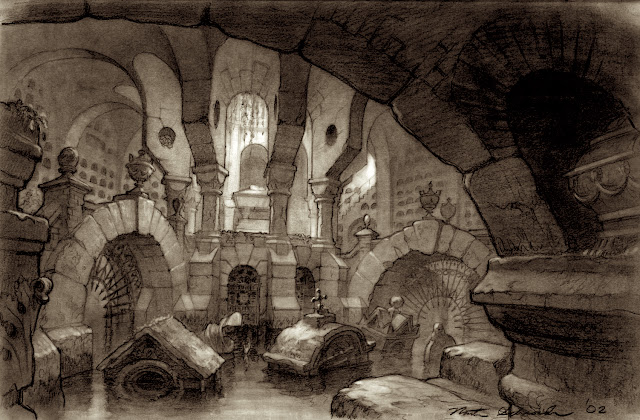 Alas, not much of this design for the crypt scene made it into the movie, which rejected those heavy stone arches in favor of lighter wrought iron work. Admittedly, that's more in keeping with a New Orleans setting, and besides, it offered greater flexibility for camera angles. 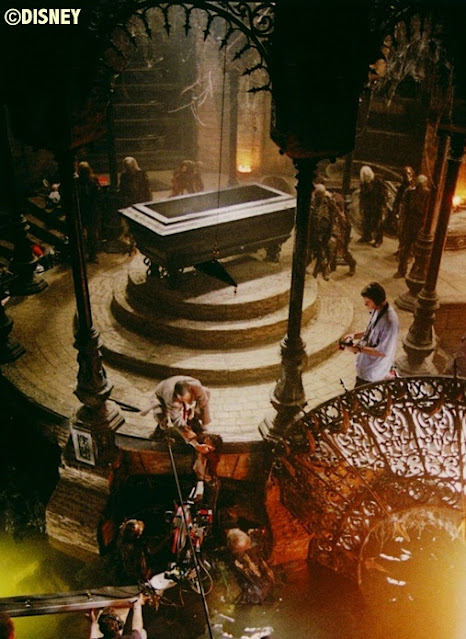 But anyway, compare Schroeder with some of the Piranesi etchings above, as well as some others in the set, like this one. There's enough there to at least raise suspicions. 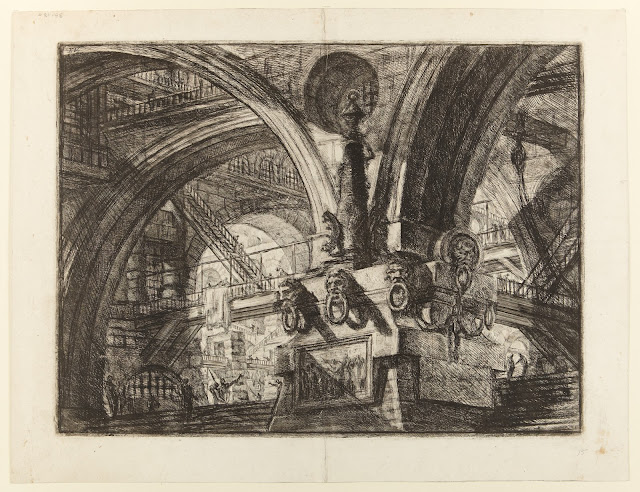 I'm afraid that's about all you're going to get in the way of Mansion connections. Sorry.