One Last Trip into Disneyland Graveyards (Including a New TSI Photo!)

.
I've done posts on  all ... the ... Mansion ... graveyards (total of eight, by my calculations; but it depends on how one chooses to count them). Here at LF we've also included a well-received excursus on the three graveyards on Tom Sawyer Island. This led to a post on other long-forgotten graveyards in the park, like the one on Rainbow Ridge and a special one-off at the Mansion in 2000.

There are two more boneyards that I have promised at one time or another to cover someday, and I guess that day is today. Even though it may seriously be questioned whether either of these is really worth a post here, it doesn't matter. I said I'd do 'em, and by Gore, do them I shall.

And then that's it. I am aware that still other DL graveyards once existed (like the cluster of tombstones around the vulture's tree in America Sings), or still do exist (like the "boot hill" setting in the Frontierland shooting gallery), but I'm skating on thin enough ice as it is.

If you like the little stone church in the "Alice's Village" portion of Storybook Land, you will definitely want to check out this post by Kevin Kidney. I'll lift two pix from there to show the germinal history of the building, but I recommend you go see the rest of the photos at Kevin's blog.

This next photo is currently backwards at Kevin's site. I've flipped it around.

Here's fun fact number one: The windows in the church are real; that is, genuine leaded stained glass! Frank Armitage designed them, and Disney legend Harriet Burns made them.

Fun fact number two: The truly odd thing about this church is that it's completely gratuitous. There is no parish church building, let alone churchyard, anywhere in the Alice books or in the 1951 Disney film. True, you can see the tower of Christ Church Oxford in the distance in the opening scene, but that's hardly the same thing, and no one in the story makes any reference to it. Someone at Disney just wanted to do a typical English parish church, period, and "Alice's Village" provided the necessary excuse for making one and placing it in Storybook Land.

Three cheers to that someone. I must confess to a strong weakness [sic] for English churches, so it's no surprise that this is my favorite building in Storybook Land. I've got several books on English church architecture, as a matter of fact, with heavy emphasis on the humble but often very ancient parish church.

Something I find quaint and curious is that in addition to the fact that these old churches always have graveyards beside them, on occasion the churches themselves function like grave markers. There are about 3000 lost villages in the British Isles, hamlets and towns no longer extant, wiped out by the plague in many cases, and after all these centuries it is sometimes the case that the village can only be located because the ruins of its church are still there. Being the only stone building in the village, it survived while everything else gradually disappeared.

Lo, the hamlet of Low Ham. Only the parish church still stands, like a tombstone for the lost village.

But I digress. Back to Alice. Like any ancient parish church, Alice's includes a churchyard. Since it's still there, this lilliputian cemetery isn't so much long forgotten as easily forgotten. It's charming, but beyond that, what is there to say? Well, there is one thing I've noticed, and I suppose this will have to qualify as fun fact number three: Unlike other Disneyland graveyards, whenever they do some gardening/landscaping/painting/ that entails uprooting the tombstones, they put them back any old way they please. Little attempt is made to keep the markers in any particular spots or to replicate the old design when a new one is made. A simple photo survey shows this clearly enough (as if we needed an excuse!).

Here's a "magic eye" 3D version of the church when it was brand new.
Note that the greenery around the scene has not yet filled in.

The two shots below show the churchyard some time later, but still in the 50's,
and there are already noticeable differences between the two layouts. 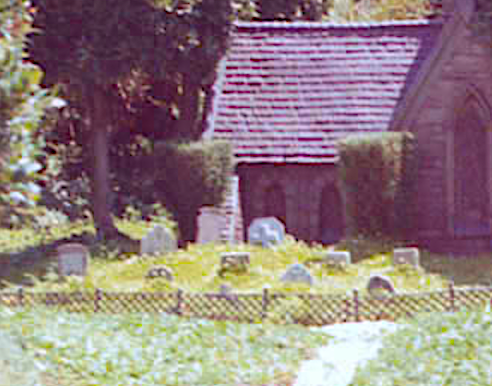 Perhaps a year later, a lot has changed:

A close-up. Pity we can't read what's on the stones:

A close-up (Dave DeCaro seems to have a special interest in the little stones as well):

Hmph. No respect for the dead if they're only three inches tall, and this despite the vehement
protest of both the book and the Alice film itself that three inches is a very good height indeed. 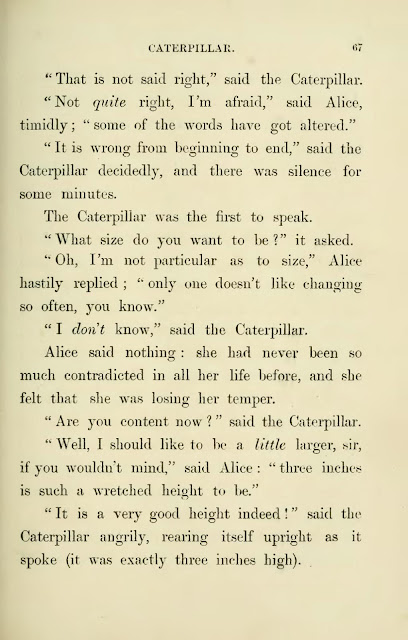 In the early history of the first pet cemetery at the Haunted Mansion (on the north side), we saw some degree of carelessness with regard to the placement of the animal markers, but nothing like the cavalier attitude we see here. You will recall that when someone treated the Fort Wilderness cemetery in this way, a subsequent Imagineer put the grave markers back where they belonged, indignantly, one supposes.


In the 2008 and 2013 shots you can see that one of the tombstones is painted in the fashion of an authentic 16th-18th century grave marker, complete with a crude winged-skull icon at the top:

I only mention it because most of the headstones in the Mansion's graveyard jamboree scene are also designed to reflect that era, and a few of them also sport the popular winged-skull image. There's nothing close enough here to suggest that the Alice stone is an actual tribute to the Mansion. Almost certainly it's merely a matter of aping a similar style from the same, broad time period. Still, it's fun to wonder about it. A little.

Very much in the "long forgotten" category this, but it may be doubted whether it counts as a graveyard at all. It isn't even a deliberate deposit of the deceased, like the good old Heap o' Skulls™ over in the Jungle Cruise:

"This place is more fun than a canoe fulla crania!"

But for some reason it seems to belong in the group. Here's the story. When the Rainbow Caverns Mine Train first opened in 1956, the Living Desert had a poisoned waterhole scene in it, a place where many cattle had apparently died. The waterhole was really part of the Stagecoach, Conestoga Wagon, and Pack Mule attractions more than the Mine Train. It disappeared pretty early, probably when the ride was revamped in 1960 and became the Mine Train through Nature's Wonderland and the Wagons and Stagecoach were axed. If so, the originally toxic scene was there four years at most.

You rarely find direct photos of it. Usually, you only see it in the corner of a picture of something else! It seems that most of the time it was dry, but it was always recognizable by the warning sign in the middle of it and the cattle bones around it.

In this old photo the waterhole is on the extreme left, and the sign is not visible, but it gives a good idea of the general location vis-a-vis the various means of conveyance through the Living Desert of the '56-60 era. (While you're at it, check out the utterly unconvincing pueblo buildings atop the rockwork. The lesson here, my fine young junior Imagineers, is that there are limits to how far perspective may successfully be forced, even at Disneyland.) 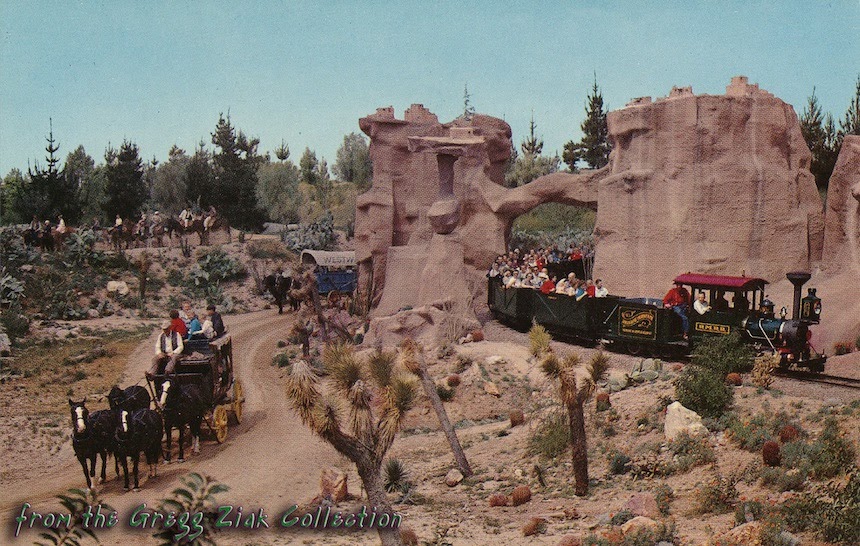 Oh, and here's your proof that sometimes the waterhole actually did have water in it:

There's been some discussion about what the sign read. It wasn't easy to decipher, but... Long-Forgotten to the rescue!

The shape and design of the sign remind me of the original riverfront grave markers on Tom Sawyer Island:

I'm not sure what is signified by the odd, blobby shape. An old, decayed board?
A rough cross-section taken from a felled tree or a tree stump? 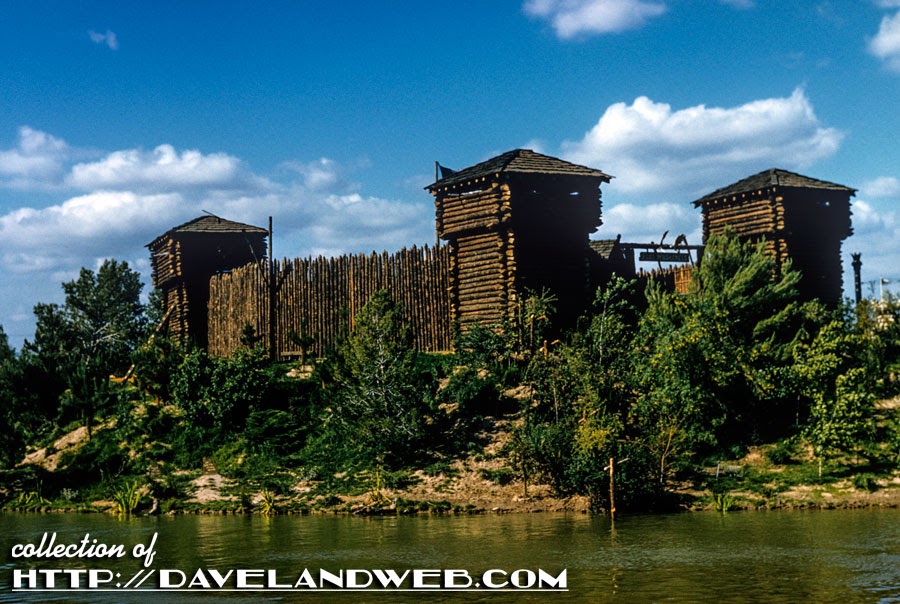 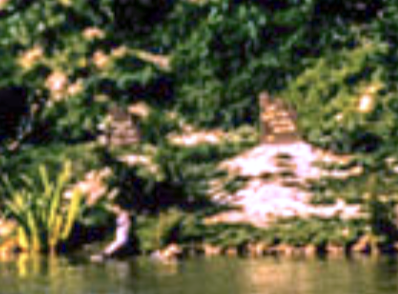 I tend to lump the poisoned waterhole in with the lost graveyards of Frontierland, even though it's technically not a graveyard. Based on that final observation above, I suppose you could justify it as an addendum to the TSI graveyard post, but seriously, I wouldn't think about it too much. Just roll with it and enjoy the show, folks.