The Hitchhikers in the Mirror, Part Two

I did a photoshop to give y'all some visual idea of what the original backup effect looked like.  From the relevant blueprints you can tell for sure that there was some kind of projected effect involving objects moving from mirror to mirror, and that they undulated, thanks to a curved screen.  What you can't tell from the blueprint is what the content of the projection was.  One of them says "Ghost Images," but that's all.  For anything more detailed than that, we have no other source right now than my memory (and that of a few others I've encounter over the years).

So...is this re-creation accurate?  Can you take it to the bank?  You can, but you'll need three forms of ID, a blood sample, and a notarized statement from your mother. 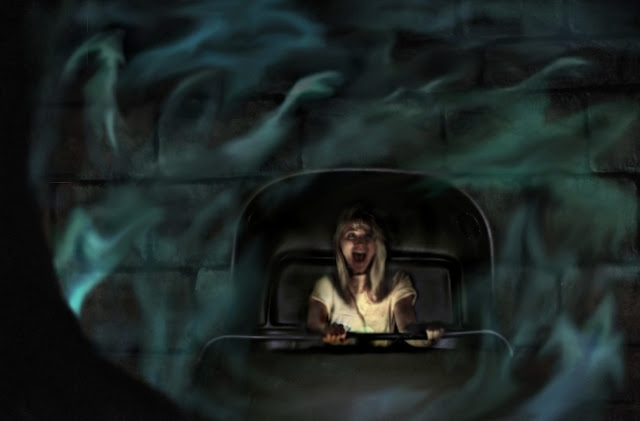 It is quite possible that Marc Davis did this concept art work for the backup
HHG-in-mirror effect. If so, it was rejected in favor of faceless, anonymous wraiths.