The Cat Lady, a Bewitching Mystery

.
Ever since the day the Disneyland Mansion opened, the far right picture in the changing portrait gallery has been the Cat Lady (called "Cat Girl" and "Cat Woman" on the blueprints). I hadn't really planned on devoting an entire post to it, because (1) there are few surprises to be found in the cultural history of the image, so its background is not particularly intriguing. Not only that, but (2) the history of the development of this particular piece is pretty straightforward and unremarkable as well. But hold. There is a startling correspondence between this particular painting and a piece of then-contemporary pop culture that has never been explained, so I thought it might be worthwhile to do a Cat Lady post after all, in the hopes that someone out there may have a key to the mystery. Plus, she's bound to be somebody's favorite, so even if it's not Post of the Year material to the common herd, there will be those who bookmark it.

As Marc Davis originally conceived it, the Cat Lady was an attractive and somewhat exotic female flashing back and forth with a human-sized black panther, that is, a big black cat. I don't suppose anyone will be surprised to learn that the association of black felines and sinister females goes back a long way. Black cats are familiar to us as, well, familiars, animal manifestations of spirits who assist witches in their magical praxis. The association of black cats and witches is still running strong in common Halloween decor, of course. 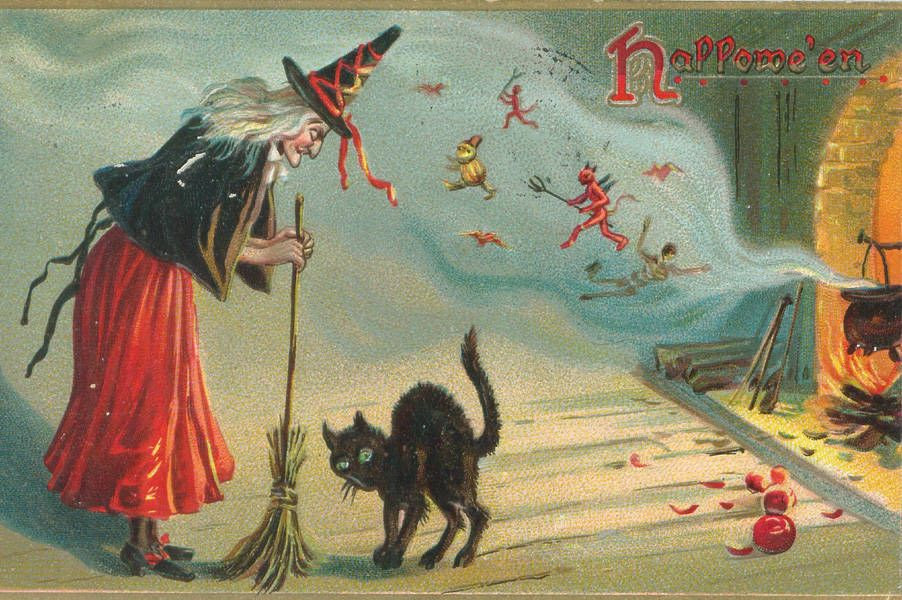 If any proof were needed for the antiquity of this motif, it could easily be demonstrated from a multitude of sources (although you soon discover that the blackness of the cat was optional until relatively recent times). We'll limit ourselves to two good, fun examples, and move on. In this first one, the cat is reading a recipe book for the "sorcerer's unguent," which will, if liberally applied, enable you to fly.


Think of it as the pixie dust of the Dark Side. 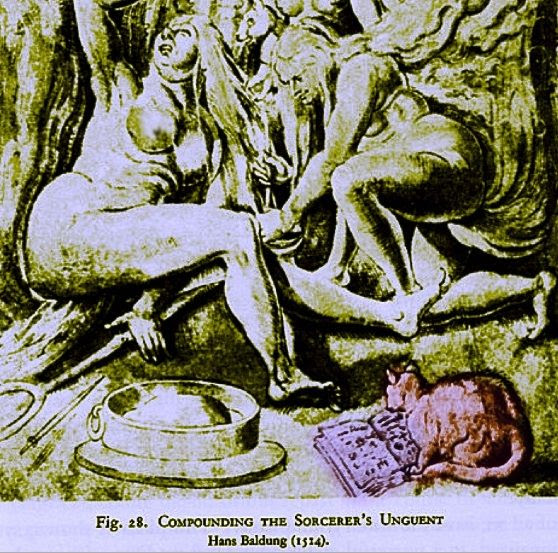 "Meow.  Okay, one of you has to swing over to Trader Joe's and pick up some
newt's eyes. And this time try to remember to get the organic kind, please?"

This cat looks like it's having a little trouble getting used to broom
travel.  I suppose it's harder than it looks, like riding a unicycle. 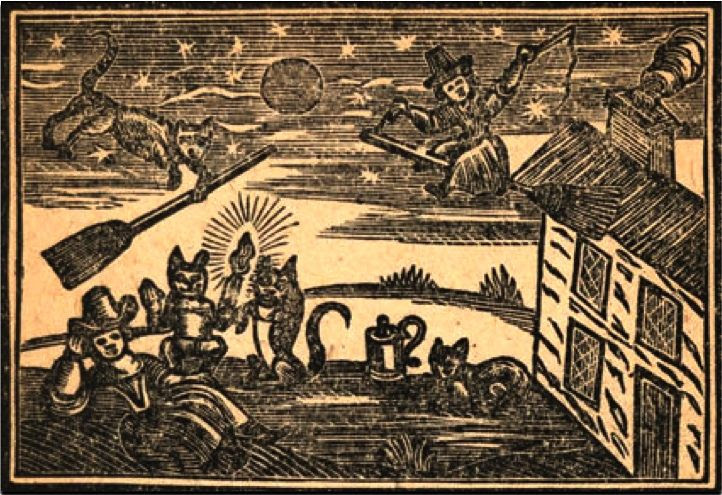 Curiously enough, in modern culture the black cat is associated with bad luck, but according to Émile Grillot de Givry, in the olden days the good luck charms we call talismans could sometimes be living animals, and "black cats especially had a talismanic repute for bringing good luck" (de Givry, 337). I can testify that my own black cat is ambiguous in this regard.  Cleo is just too, too cute, and affectionate as she can be, but she blupps out hairballs like a Gatling gun.

If we want to trace the idea of a cat woman into modern pop culture beyond the boundaries of Halloween decoration, we can hardly do better than Batman's foe bearing exactly that name. I could post some artwork from Batman comics at this point, but I'll probably get more traffic if I put up Julie Newmar: 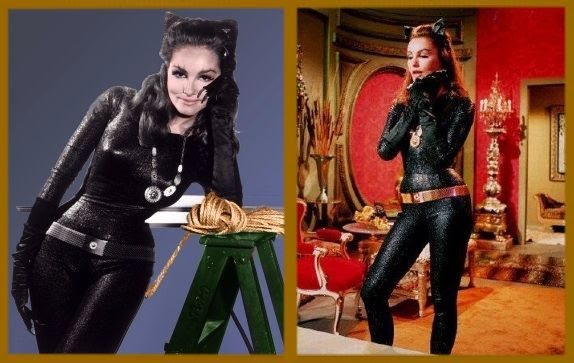 I could continue in this vein with pictures of Halle Berry and Michelle Pfeiffer, but Batman the TV show puts us smack dab in the middle of mid-sixties pop culture (1966-68); or just the time when the Haunted Mansion project was moving off the back burner. In those days, visions of Julie were dancing in more than a few heads, one supposes. (Yes, yes, I know that the Cat Woman was also played on the show by Lee Meriwether and Eartha Kitt, but Julie is the one people remember.)


So much for background.  In his concept sketches, Marc Davis had the lady turn into a solid black panther, like I said. 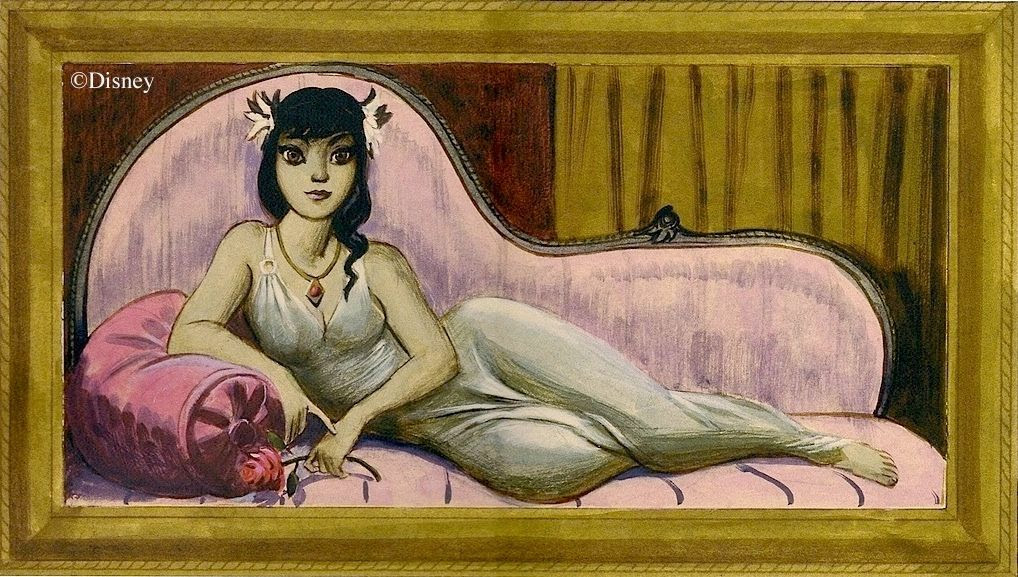 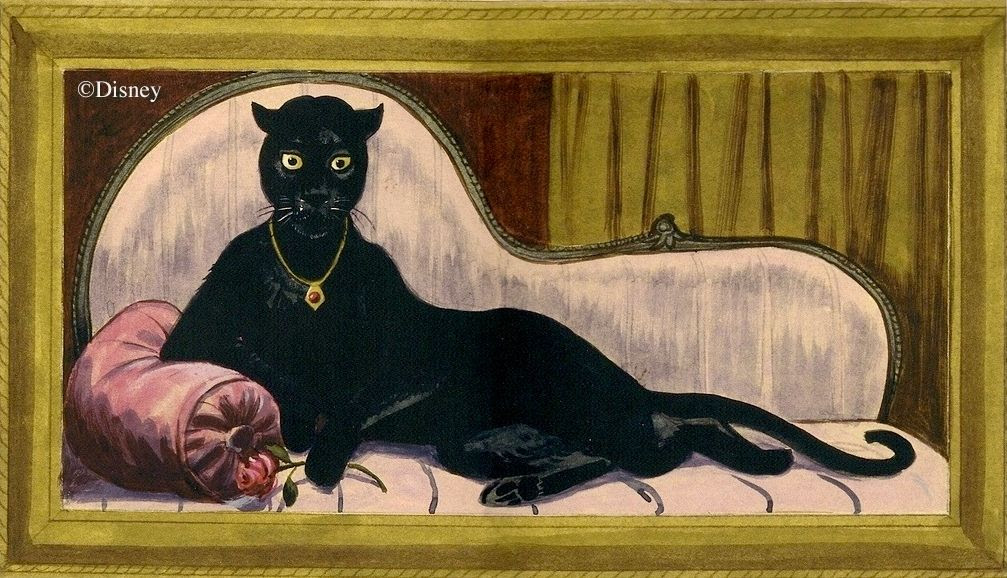 But for the paintings used in the attraction, they decided to limit the transformation
to the lady's upper half. I don't know what you would call such a hybrid.  A purrmaid? 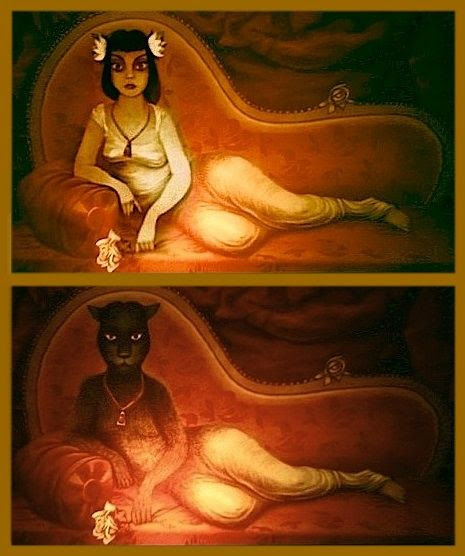 As of November 2015, we know that in fact the Davis two-parter was expanded to a six-parter before being shrunk back
down to a two-parter again. The images chosen at that point were images one and four, rather than the expected one and six. 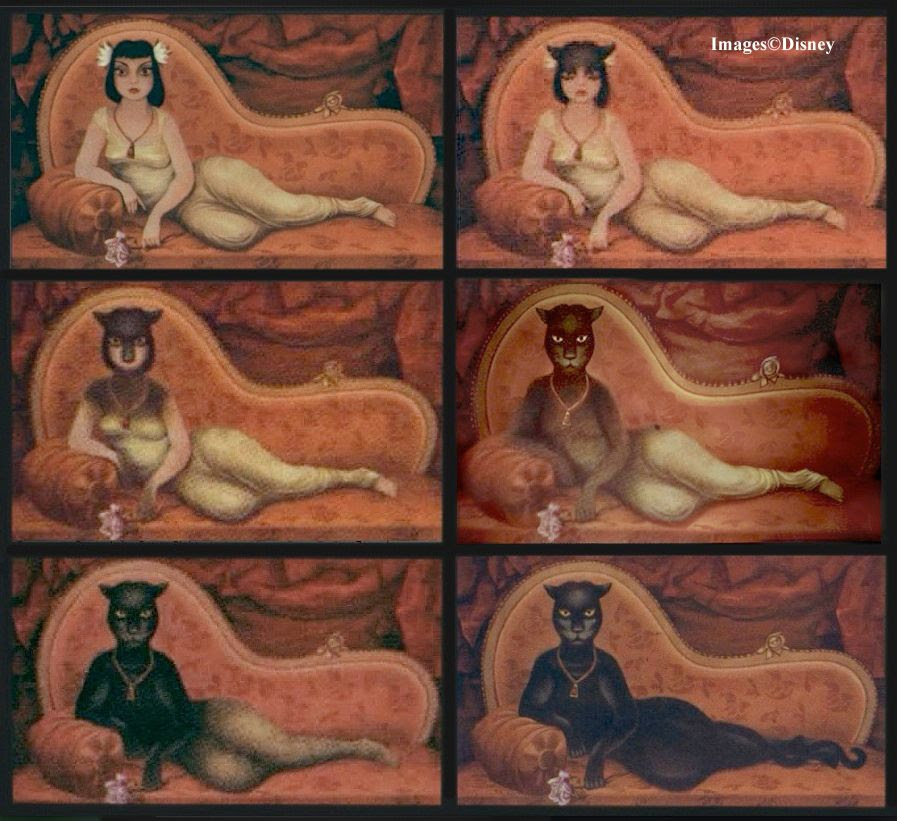 As you know, all of these portraits originally transformed with the
lightning flashes, going to a slow morph effect sometime later.

When the new-style portraits debuted in January 2005, following the seasonal HMH overlay, the Cat Lady had undergone a color
reversal.  She was now dressed in black, not white, and the black panther was now a white tigress.  She also had a bone to pick with us. 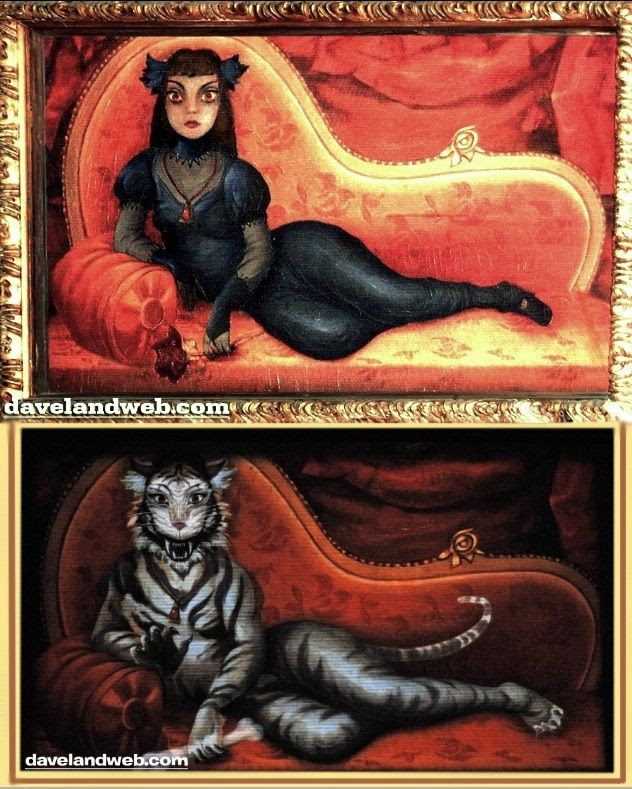 The color reversal was necessary for the new technology to work.  The secondary
picture is all white, and for contrast purposes the primary picture must be fairly dark.


And of course, we're back to the lightning flash.

Incidentally, it may be possible to trace plans for turning the panther into a tigress back to 2002 at least, since
the Cat Lady portrait used in the Haunted Mansion movie (then in production) was a tigress, not a panther.

Unlike many other denizens of the manse, Cat Lady has never to my knowledge picked up a nickname—
nothing, at any rate, that has successfully filtered into common usage. Now that she transforms into a tigress,
allow me to suggest she be named Euphrates (yoo-FRAY-deez).  Some of you will get that.  Some of you won't. 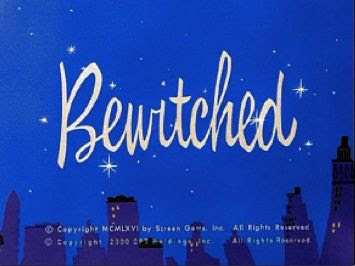 And now for our mystery. Return with us to the first season of Bewitched, the famous sixties sitcom. In the 21st episode, Darren (Dick York) is having difficulty finding the right kind of model for an advertising campaign. He needs a beautiful, exotic-looking, Asian girl. Wanting to help, Samantha (Elizabeth Montgomery) turns a stray cat into just such a model (Greta Chi), but forgets to take into account the persistently feline nature of "Ling Ling." As they like to say, "hilarity ensues" as Ling Ling dazzles everyone with her mysterious beauty but also exhibits embarrassingly feline behavior like lapping milk and gobbling down sardine hors d'oeuvres. 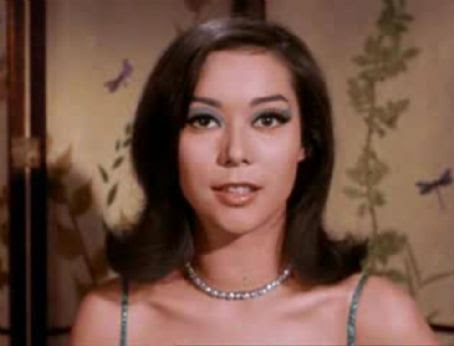 For the main photo shoot, she reclines on a sofa, and I'll be danged if the
Bewitched cat woman doesn't look a lot like the Marc Davis cat woman.

This could simply be a remarkable coincidence, of course, and at the moment, I think the smart money's on that option. If there is a connection, however, the problem is to figure out not only how, but which way the influence ran. "Ling Ling" aired February 11, 1965 and was filmed December 16, 1964, according to the list of episodes at Wikipedia. When did Marc execute his sketch? That's hard to say, but it was up on the wall at the WED studios when they filmed the Disneyland "Tencennial" special, which aired January 3, 1965. 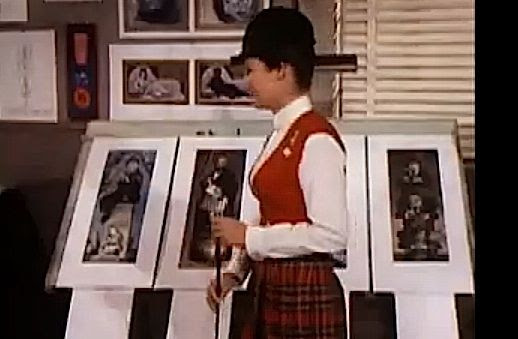 Cat Lady can also be seen in a concept painting for the "Grand Hall" which appeared in the 1965
Disneyland souvenir guide and in the concept sketch that preceded it, but these may be later than the TV special. 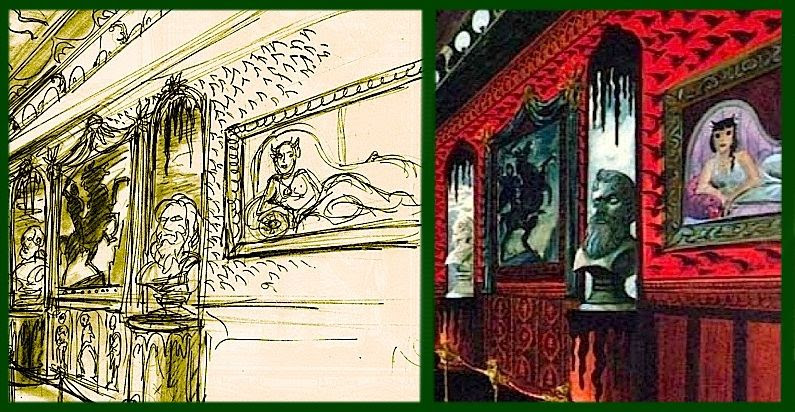 The January 3rd date is our firmest point of reference. Work on the Mansion really got going again in the latter half of 1964, after the hectic World's Fair projects were over. That's when Marc was enlisted. So "sometime in the latter half of 1964" is a safe bet. That is well before the Bewitched episode aired, so it is not possible for Marc to have seen the program on TV and to have gotten the idea from there. By the same token, how could the Bewitched producers have seen Marc's unpublished sketches before December of 1964, when "Ling Ling" was filmed? Was Marc chummy with someone involved in the production of Bewitched?


We may never know what connection there was, if any, between Ling
Ling and the Mansion's Cat Lady.  It remains an unsolved meowstery.