.
I told you I'd drop in if I came across anything worth sharing. As it happens, it happened, so welcome back.

Ordinarily, I'm not inclined to lengthy discussions of a single work of Haunted Mansion concept art if it left no traces in the actual ride. For me, that veers just a little too close to trivia for its own sake. But in this case the work in question is unusually rich, and it is barely possible that it may have left a tiny fingerprint in the ride, so . . . good enough, says I.

In 1964 Marc Davis wrote a show script for the HM which included a figure described as "the most dangerous ghost in the mansion," who later turns out to be the Ghost Host himself. Marc did a sketch showing a portrait of this ghost, who evidently stepped down into the Mansion, tearing his likeness off the canvas at the same time. We've seen this one before. 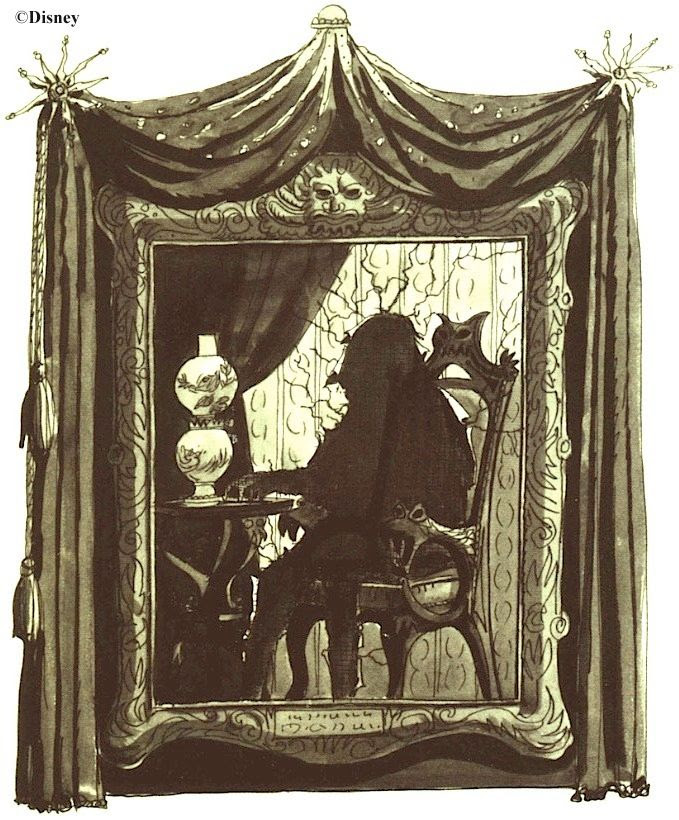 The whole concept came to nothing, but Marc salvaged the essential composition of the sketch and
reused it not long afterwards as the basis of a changing portrait, one of many that were never used. 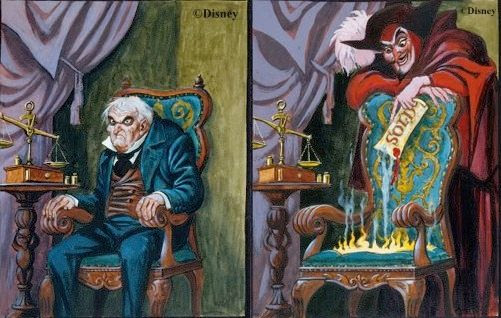 That piece goes by various names ("Burn"; "Damned"), but I'm going to call it the Burning Miser, which describes it about as clearly as a title can do, I think. The fact that the man is a miser is suggested by the apparatus on the table next to him, which may not be immediately recognizable to everyone, so it won't hurt to describe it a little. 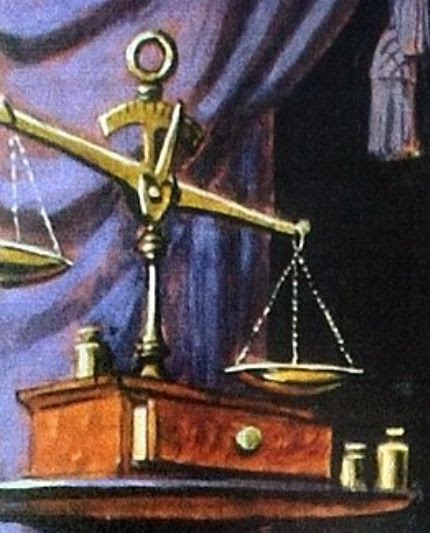 It's a scale and weights set, the kind of thing used by assayers to determine the weight of gold nuggets and whatnot.  Its presence here suggests a man who keeps track of every gram of wealth he possesses, and his expression tells you all you need to know about his character. 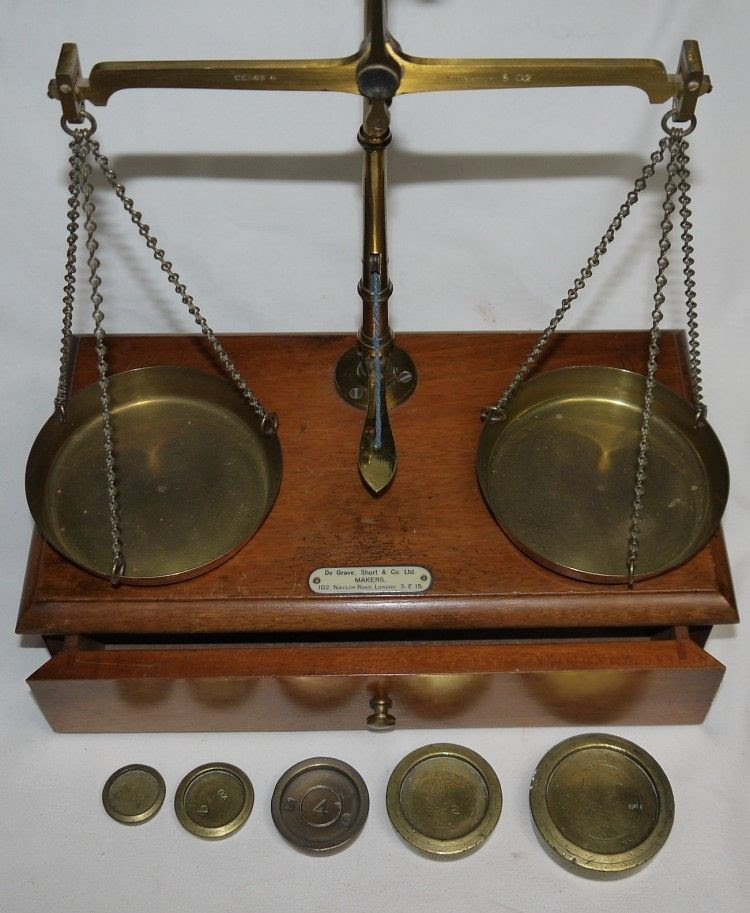 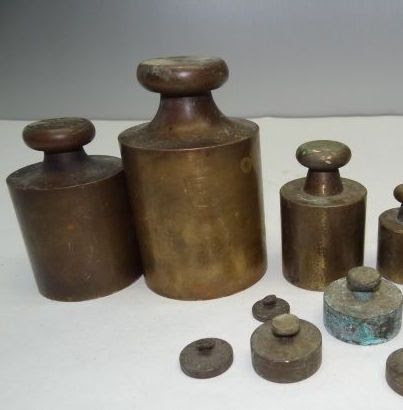 As many of you already know, this is one of those changing portraits that was intended to be
a gradual, multi-panel job, not a single back-and-forth flash. There are six sketches altogether: 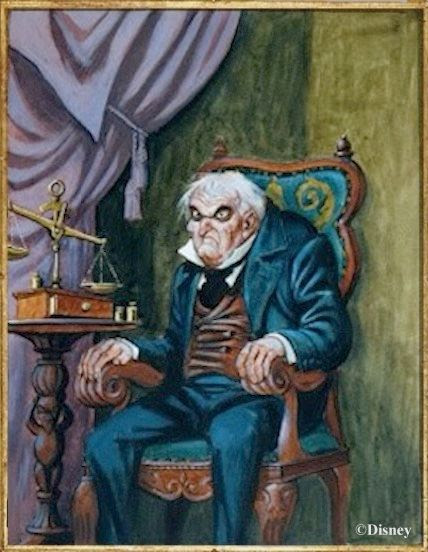 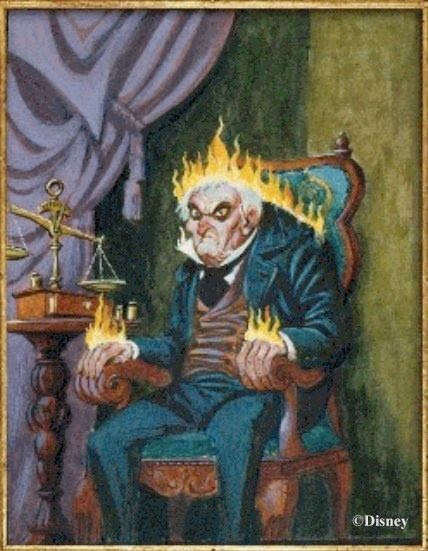 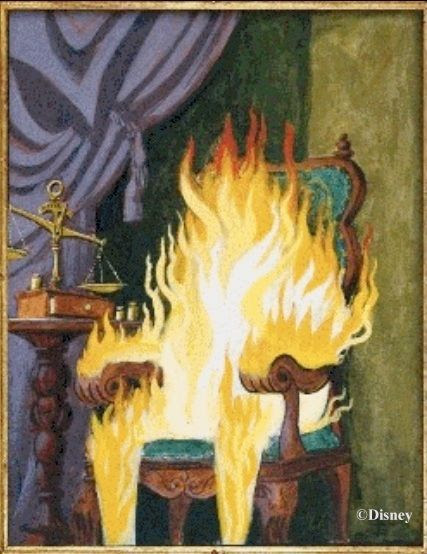 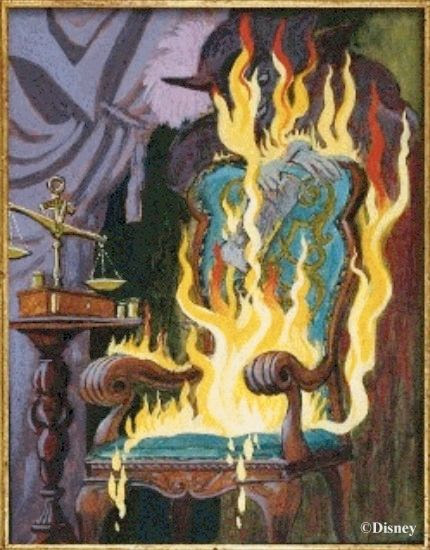 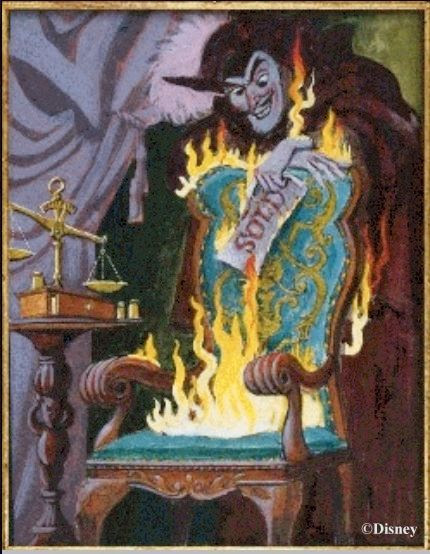 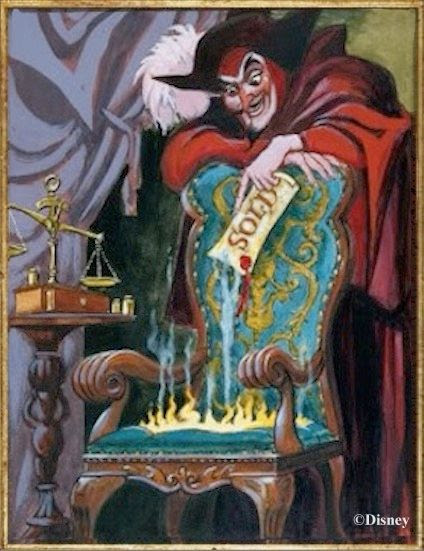 . . . and for good measure, here's a delightful animated gif from Captain Halfbeard:

This is an update of an update. The alternate version of the final panel in the Burning Miser series seen below sparked considerable debate at the time of the original post, but now, barely a month later (Nov 2015), it is no longer a mystery. We now know that Ed Kohn did a rendering of the full Burning Miser set, and that what we have here is a poor photograph of a glass slide from the Kohn set. 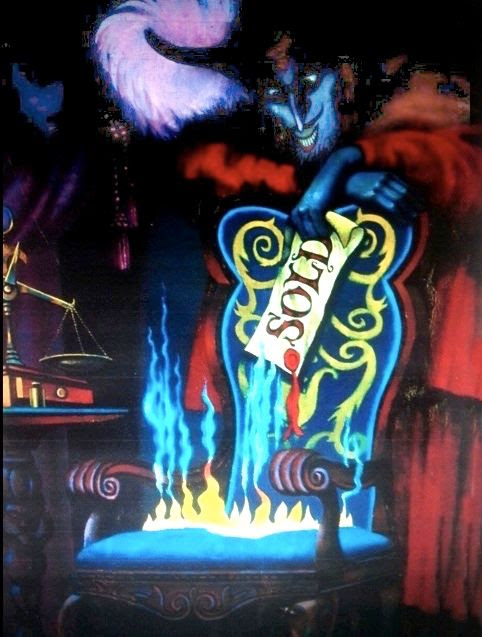 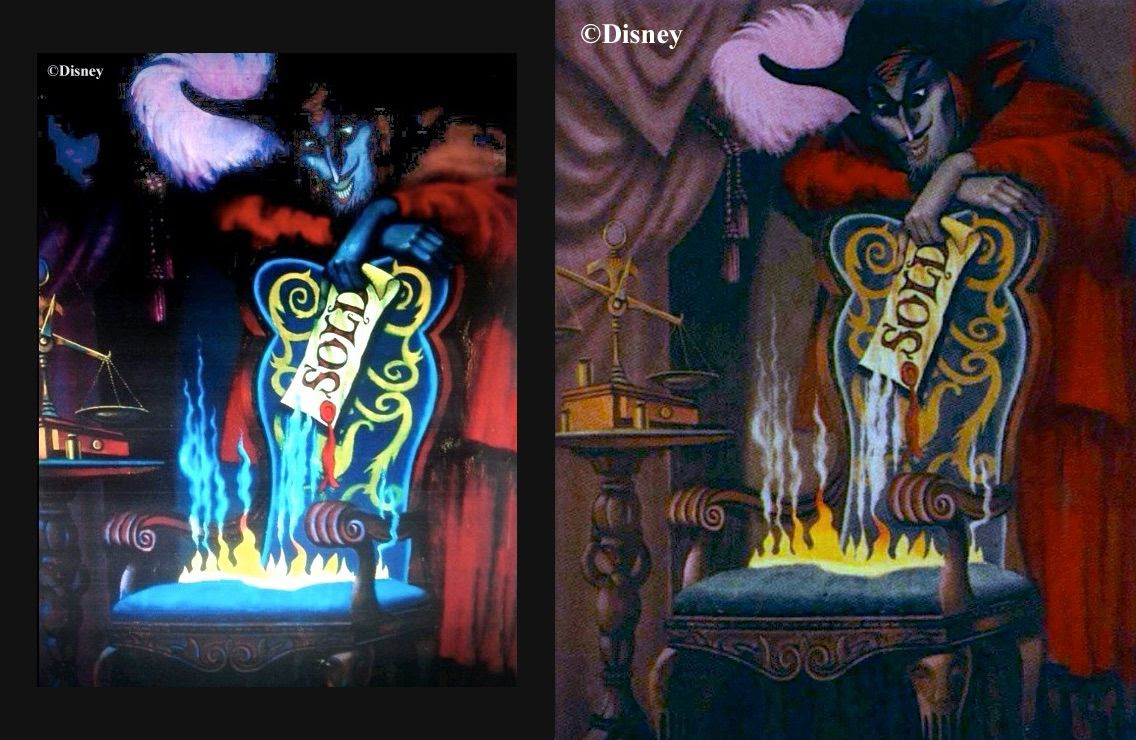 I won't pretend that the evidence is conclusive, but I can't help wondering whether the embroidery
on Granny's chair in the ballroom may have been inspired in part by the chair in the Burning Miser
series. It's not just a matter of design. For me, they radiate a very similar sense of lunatic nastiness. 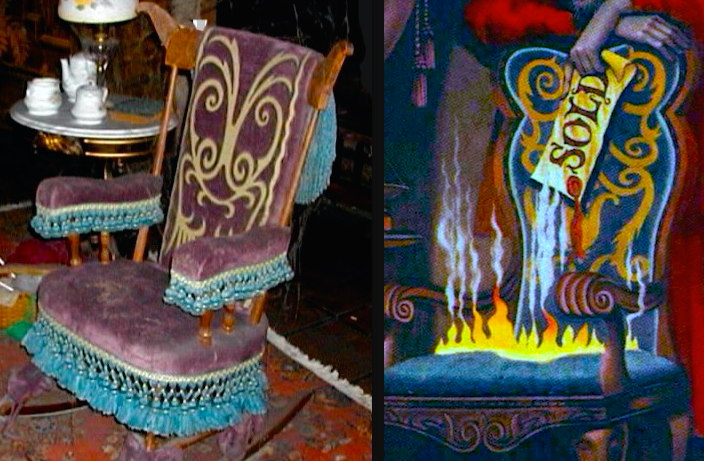 Conventional wisdom has always been that the so-called "Donald Duck chair" at the Endless Hallway was inspired by Rolly Crump's talking chair from the unused Museum of the Weird, and it's just been assumed that the other chairs with faces on them (in the ballroom and in the WDW library scene) are nothing more than variations of that one. 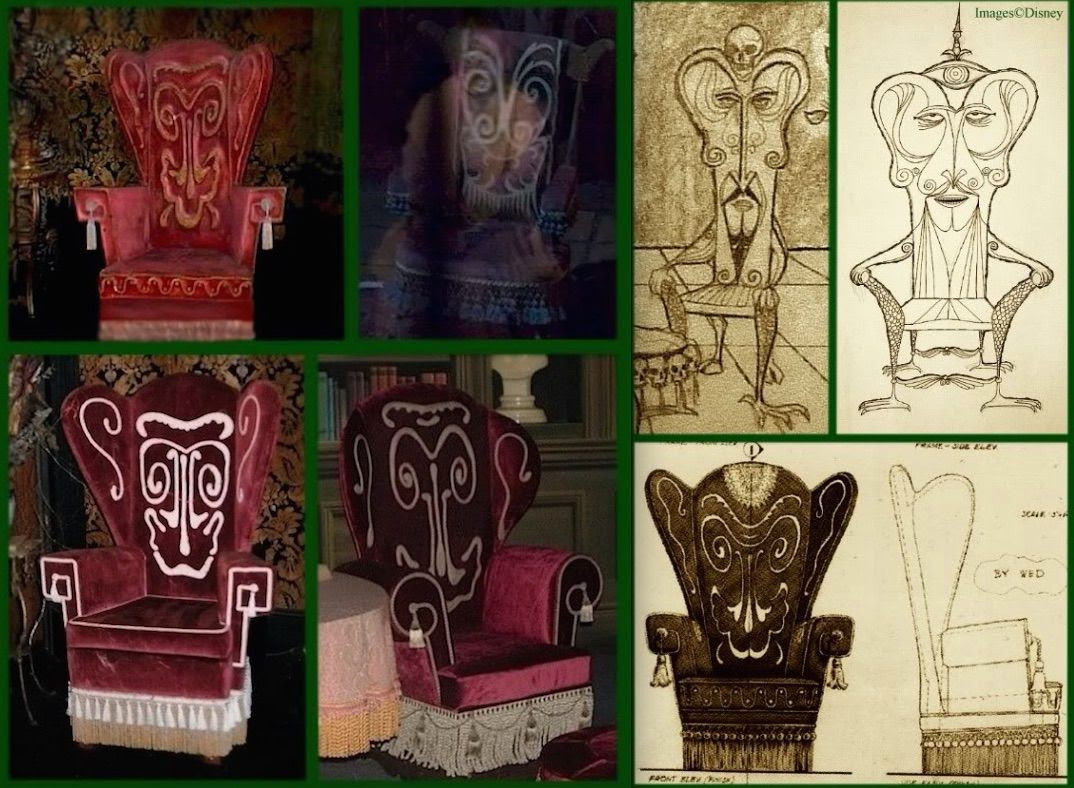 Maybe that's all there is to it, but to my eye the chair in the Marc Davis paintings from the Burning Miser series bears
enough resemblance to Granny's rocker to at least raise the possibility of influence from there as well as from Rolly.

I think that what I admire most about the Burning Miser is how it deftly combines into a single artwork three separate narratives: the Rich Fool, the Faust legend, and the phenomenon known as Spontaneous Human Combustion. All three are laid under contribution, but the end result is seamless.

For this one, we can do no better than cite the Master Himself:


Luke 12: 16 And he told them this parable: "The ground of a certain rich man yielded an abundant harvest. 17 He thought to himself, ‘What shall I do? I have no place to store my crops.’ 18 “Then he said, ‘This is what I’ll do. I will tear down my barns and build bigger ones, and there I will store my surplus grain. 19 And I’ll say to myself, “You have plenty of grain laid up for many years. Take life easy; eat, drink and be merry.”’ 20 “But God said to him, ‘You fool! This very night your life will be demanded from you.Then who will get what you have prepared for yourself?’ 21 “This is how it will be with whoever stores up things for themselves but is not rich toward God.”
This theme has reappeared in many iterations, including ones in which it is the Devil himself demanding the soul
of the Rich Fool. This 1902 Frank Beard illustration from "The Ram's Horn" is very similar in some ways to Davis's version. 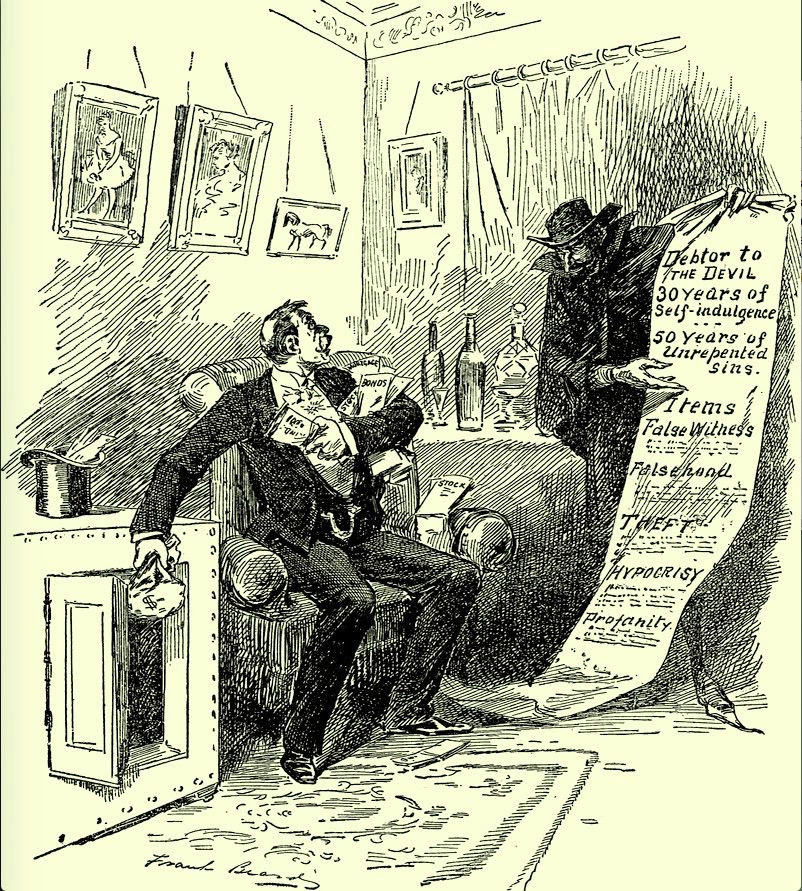 
You could almost suspect direct influence, but probably you shouldn't. I doubt that Davis spent much time sifting through old copies of obscure
religious journals like "The Ram's Horn" (although Beard was a tolerably well-known American illustrator in the late 19th century). 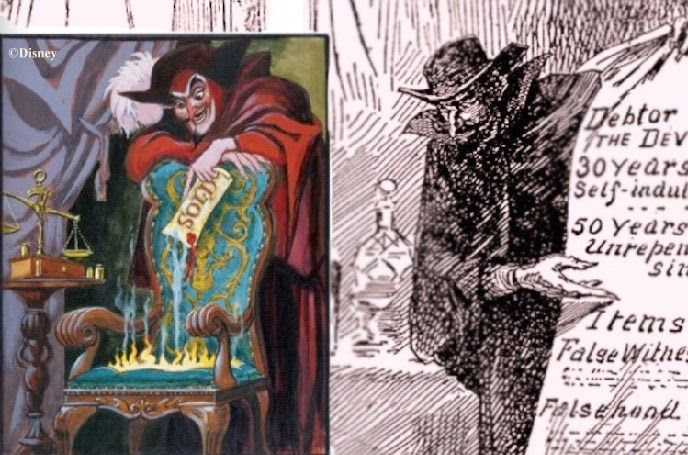 We're all familiar with Faust, the scholar who sells his soul to the Devil in exchange for knowledge. The story never seems to grow old, and new versions of the Faust legend continue to appear. In the case of the Burning Miser, we can say with some certainty that it began life as simply another version of the Faust story, as can be seen in these Davis sketches: 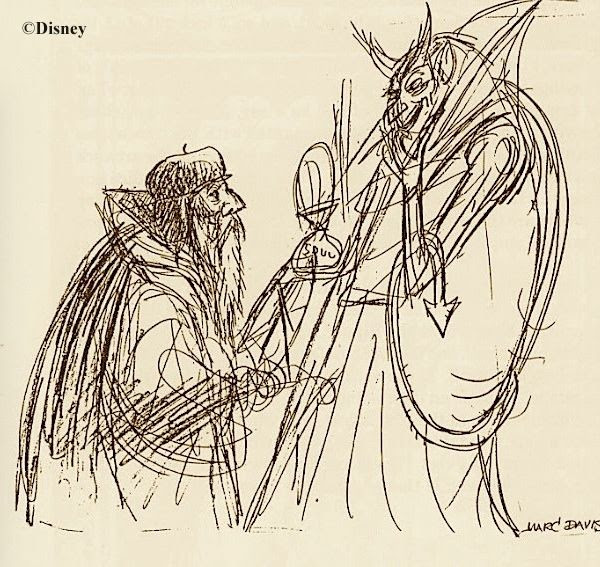 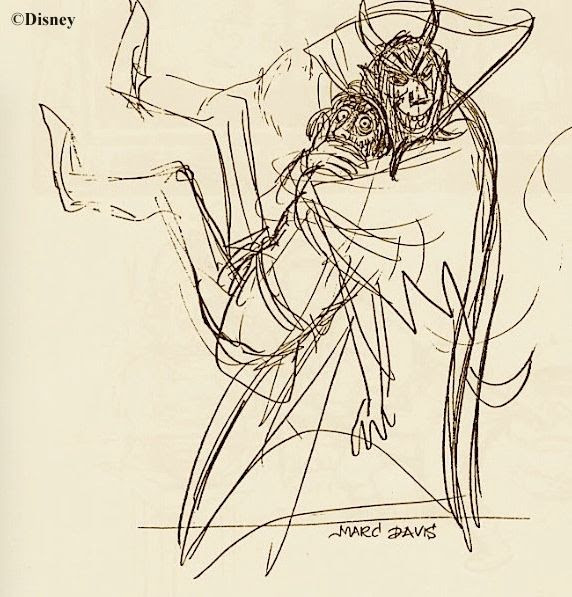 It is not hard to find accounts of human beings suddenly bursting into flame and perishing, with no obvious cause present that could explain such a phenomenon. You'll usually find treatments of SHC in books dealing with the paranormal, right alongside ghosts and UFOs. One thing these discussions often mention is that Charles Dickens was apparently aware of the SHC mystery and included an instance of it in his novel, Bleak House. What we are most interested in is the illustration of the episode. Dickens used a number of illustrators during his career, and they have themselves been the subject of a good deal of attention by Dickens scholars. Most of them were very talented artists. One of them was Hablot Knight Browne (nicknamed "Phiz"), and he illustrated ten of Dickens's novels, including Bleak House. Studious artist that he was, Marc Davis may very well have been familiar with the work of any illustrator of Phiz's caliber, especially since some of Phiz's Bleak House drawings were gothic and ghostly; in other words, they were exactly the sort of thing the HM Imagineers wanted to research anyway: 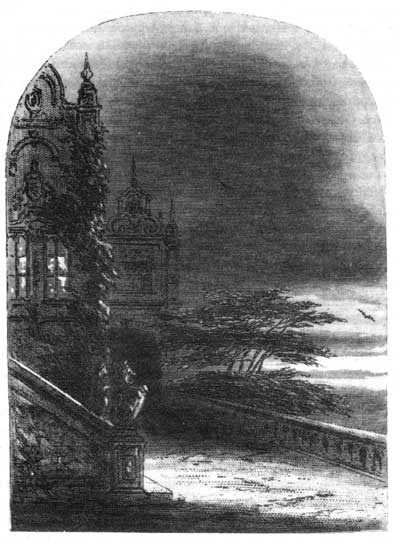 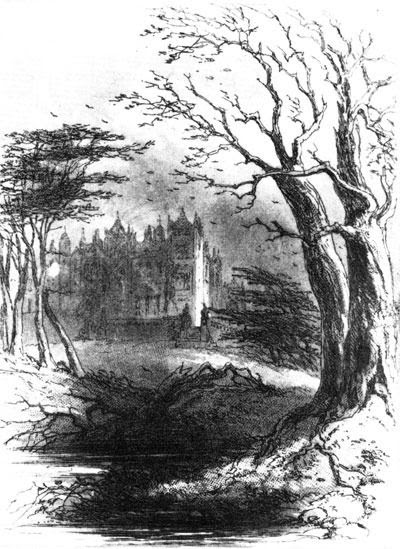 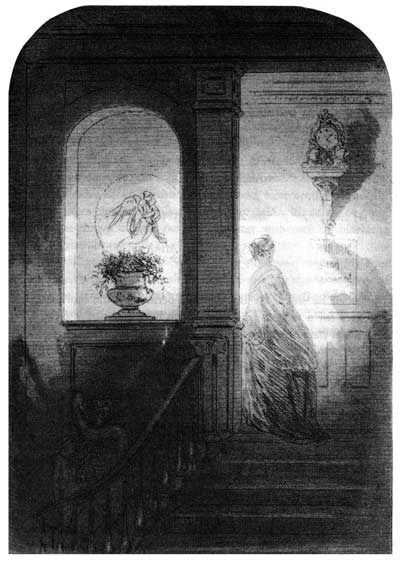 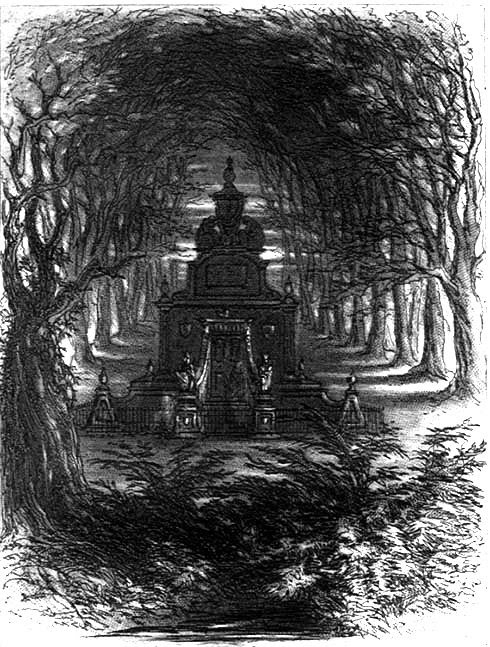 Phiz's illustration of the SHC incident in the novel is interesting: 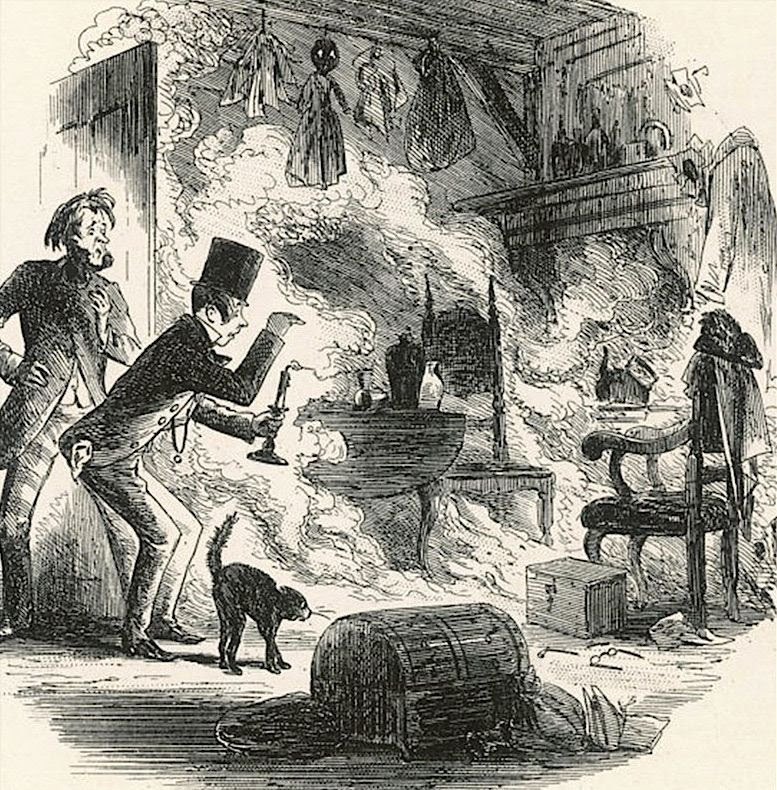 More likely than not it's a coincidence, but I note that the style of the chair is very similar to the one in
the Burning Miser portrait. I'm sure we'll never know if there's a connection, so make of it what you will. 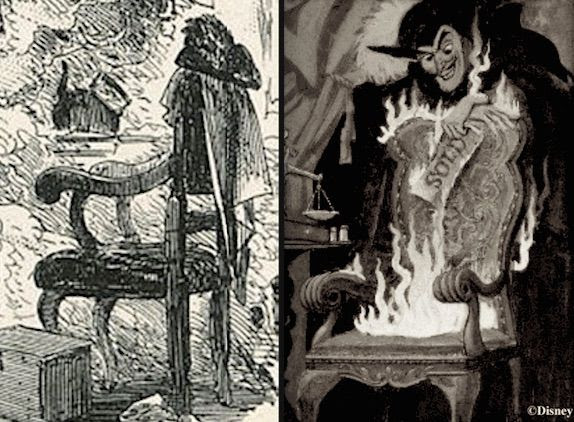 Time to wrap this thing up. 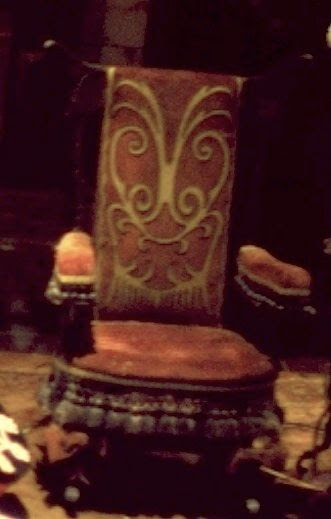 You just gotta love this ride. Here's this pattern on a chair, easily missed and glimpsed only in passing, and it's possibly the tip of an iceberg, inspired in part by a story in pictures that you never see. That story in turn draws inspiration from the Rich Fool traditions with its money grubbing miser, from the Faust legend with the sale of his soul to the Devil, and from the eerie Spontaneous Human Combustion phenomenon with its fiery climax.


The Burning Miser is a particularly fine example of Marc Davis's ability to combine already familiar cultural fixtures into something
new, interesting, and—despite its hybrid pedigree—not the least bit confusing. Well played, sir. Once again, Mr. Davis, we salute you.