.
Updated April 23, 2017 (the ACTUAL anniversary date!), with a link to new information about a house illustration discussed below.

Okay, we're a couple of weeks early, but yep, Long-Forgotten is celebrating its seventh anniversary this month. What can one say? I can only shake my head in amazement (as opposed to a certain ghost who shakes his head in a hatbox). It's true that new posts these days are as rare as 1909-S VDB Lincoln pennies (I've been messing around with my coin collection lately), but have no fear: the critter ain't dead until I say it is. Speaking of collections, I am still gathering HM materials as I find them and may do an "anthology" post or two in future, dealing with topics of interest that are too short for a full post. And as long as they keep fiddling around with the rides, your favorite reviewer will be there with his magnifying glass and big mouth. Looking down the road, you can be sure that there will be a lot of hoopla over the 50th anniversary of the original DL Mansion in 2019, and yours truly is planning on a trip to the park that year, maybe on the exact date I was there the first time. 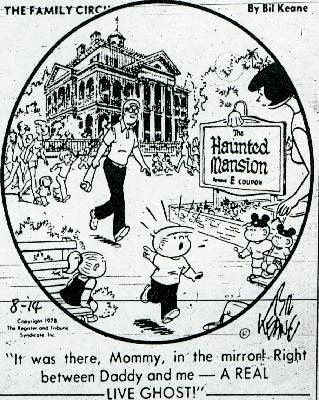 As always on these our anniversaries, we party down for a paragraph or two, and then tired but happy Forgottenistas are sent home with a piece of Mansionalia maybe a little too weak for a full post but a little too strong for the trivia basket.

This one is really fun.

A few months ago, gerG, a Disney guy who is a fan of the blog, sent me a copy of Frances Lichten's Decorative Art of Victoria's Era (Scribners, 1950). It was previously owned by a friend and colleague of gerG but was on its way to the dumpster when gerG rescued it and kindly mailed it to me, figuring I'd like to have the book. It's an old, library discard, and it's seen better days, but with a little tape on the cover it's good to go.

Mansion fans already know about the book. It came to prominence several years ago when it was discovered that the façades of both the Anaheim and Orlando Mansions were directly inspired by pictures in it. A copy must have been available in the WDI (then WED) library. We've discussed Ken Anderson and the Shipley-Leydecker house many ... many ... times, so a few pictures are all we need at this point. 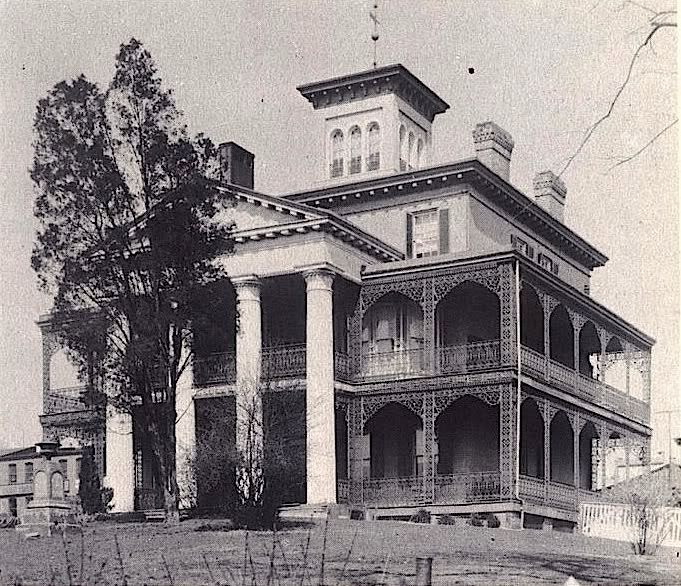 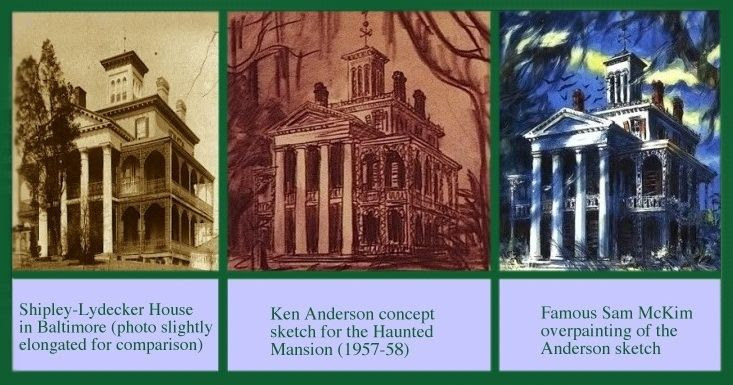 Almost as well-known is the etching of a Neo-Gothic, New England house that
probably served as inspiration for the WDW HM. Once again, pictures say it all: 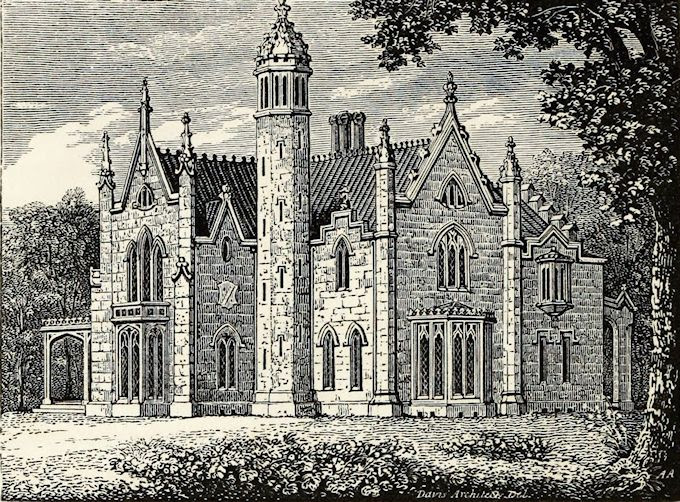 
If you have any doubts, just color it and stretch it out a bit, then lay it alongside the Disney version. It is believed that Claude Coats was
most responsible for the look of the WDW Mansion, so that's two of the most important Mansion Imagineers making use of Decorative Art. 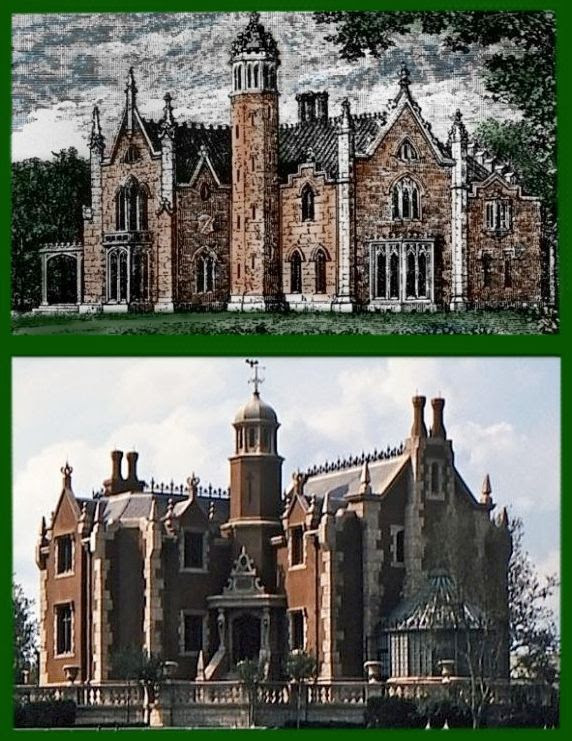 Foxxy has already given the book more serious consideration than just calling attention to a few random photos in it, and you do well to read her take. (As for the house itself, a flood of new information about it came to light last October and can be accessed HERE.) As for me, once I had a copy of Lichten in my hands, my natural inclination was to wonder if there were still more examples of Mansionistic influence in it not yet noticed. Sure enough, it wasn't difficult to see that a third Imagineer, Marc Davis no less, also drew direct inspiration from the book. That's our topic for today.


In our earlier discussion of original plans for the Mansion foyer, we learned that a talking bust was long
planned for the corner. You will remember Marc Davis's concept art for this effect, which dates to 1964: 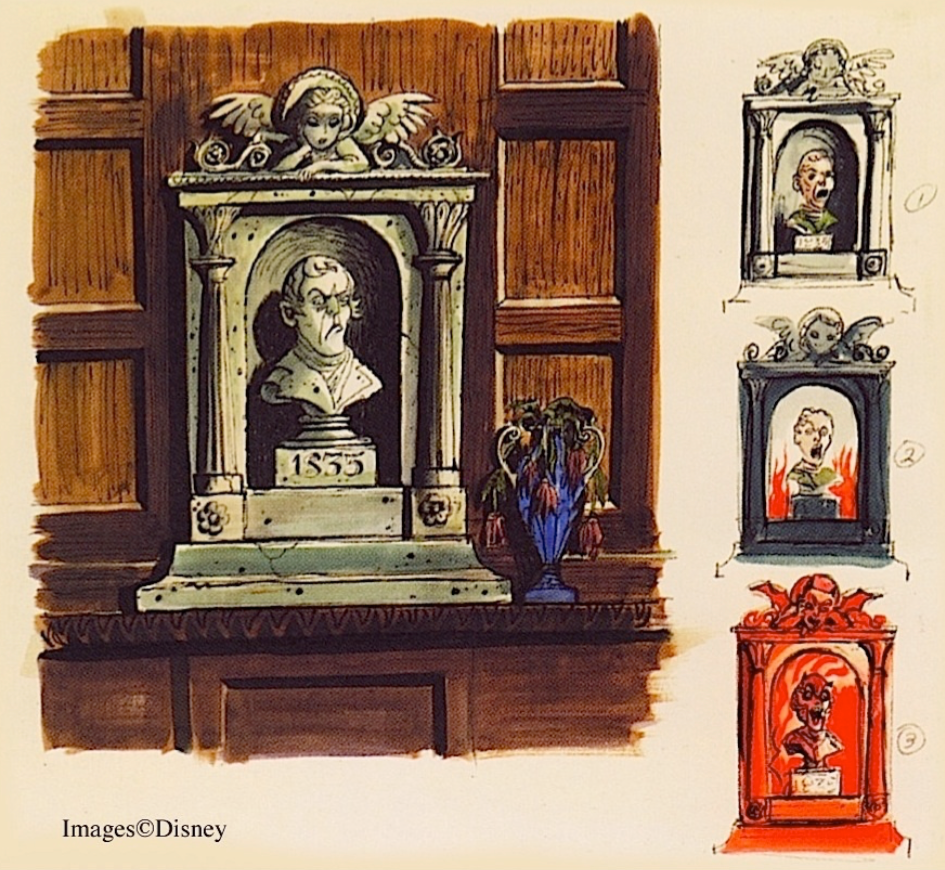 Well sir, the immediate inspiration for this artwork can be found on page 18 of Decorative Art: 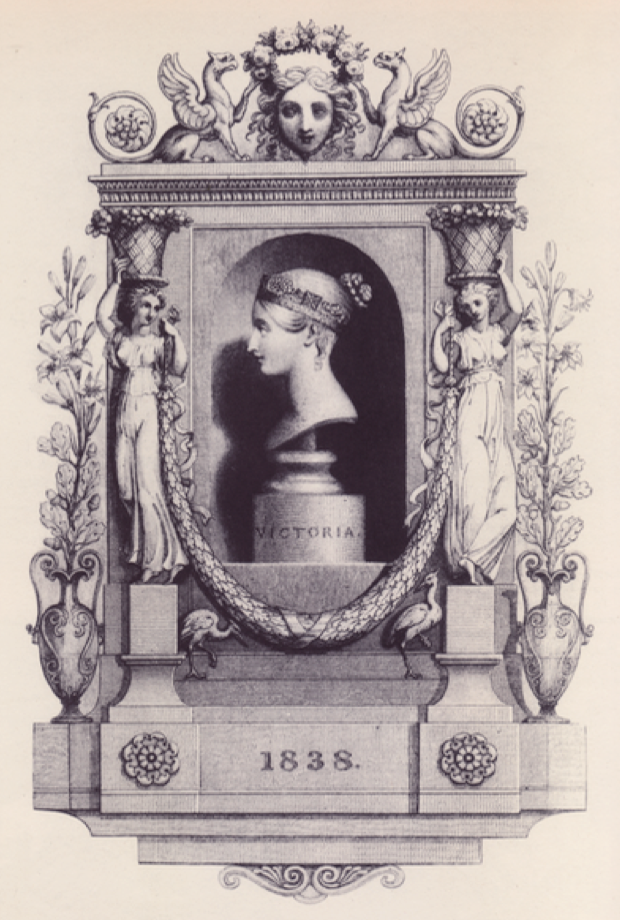 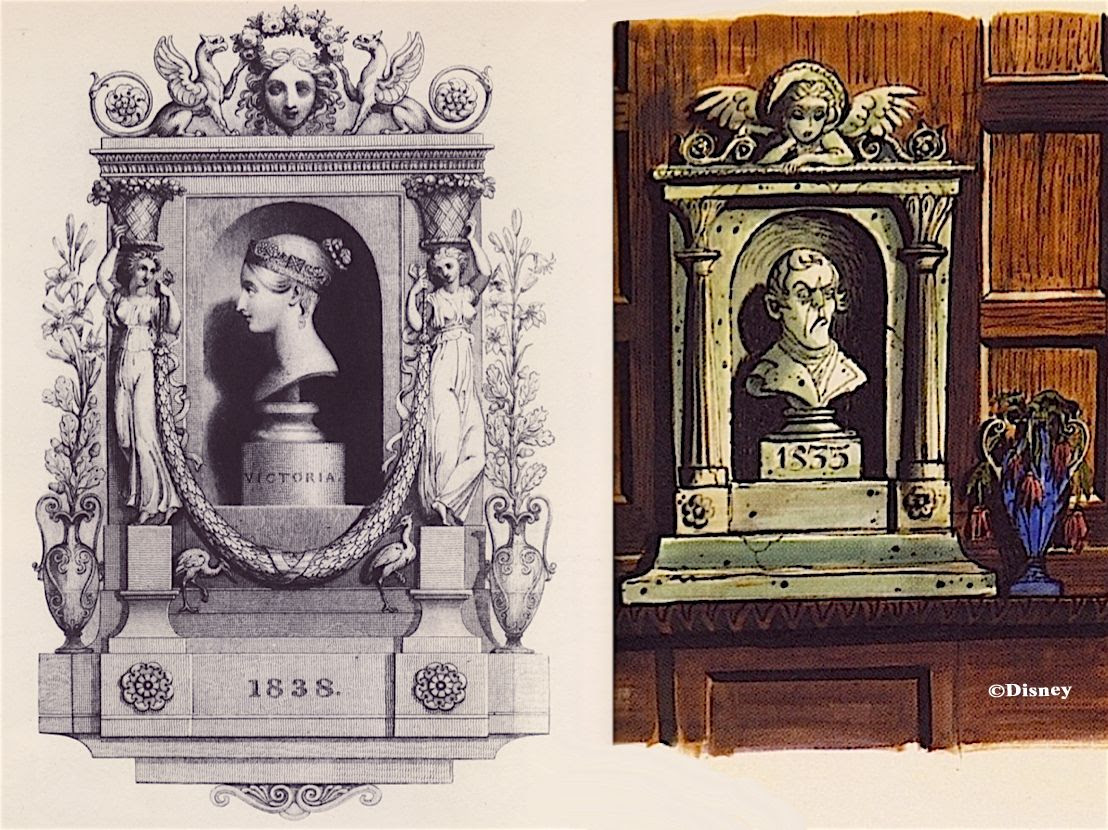 What's delightful is that you can almost see the wheels turning in Marc's mind. The gryphons disappeared, but their surrealistically botanical tails remained. They also left their wings behind. Those were useful for transforming the female face into a full angel, which made for a good beginning to a devilish gag Marc cooked up. Note how even the barbs on Marc's curling vines have their reflex in the original tails. And look at the woman's hair. You can see right here how Mr. Davis creatively turned one thing into another, which is, as I said, kinda fun. 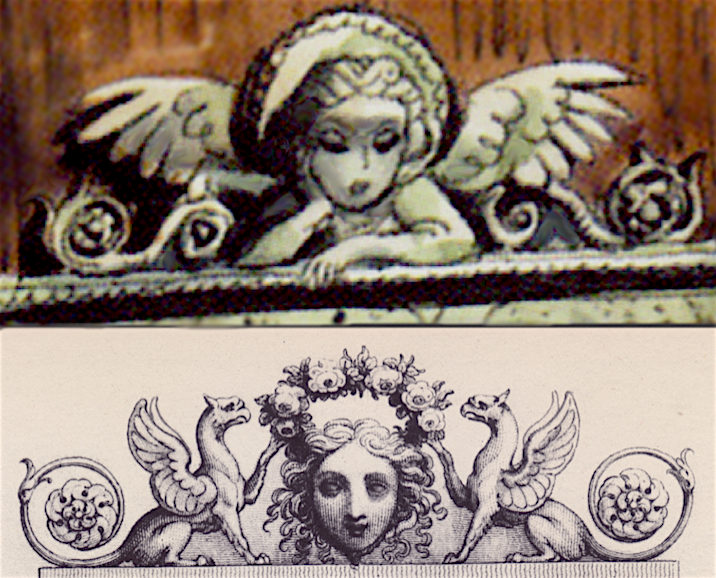 The flanking columns, anthropomorphized as women in the original, became more traditional columns,
but Marc's unusual double capitals are best explained by the very similarly shaped baskets on the women's heads: 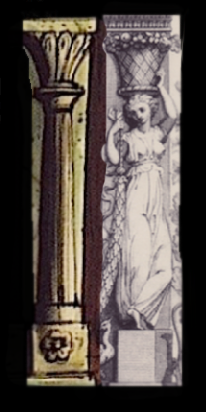 Then there are the rosettes on the pedestals and the 1830's date... 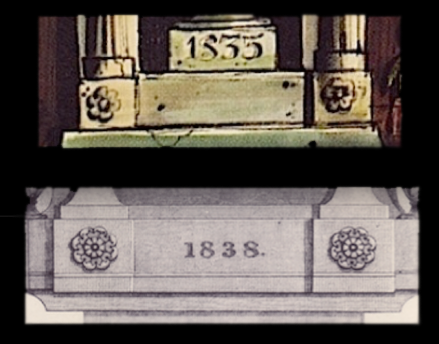 I don't want to push this thing too hard, but for what it's worth, that dogtooth design
along the edge of the mantelpiece could possibly be another takeaway from Lichten. For me, a particularly amusing discovery is that even the vase on the mantel in the Davis sketch, which seems like an independent and unrelated compositional element, looks like it might in fact have been inspired by the vases in the same Lichten illustration. Since we're pretty sure by now that page 18 was laying right there in front of him, it's hard to resist that conclusion. "Nice vase. I can use that. Put some wilted flowers in it." 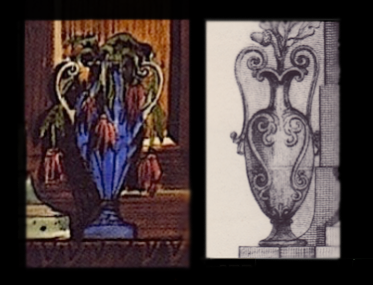 Although I've sometimes made exceptions, I have usually avoided devoting whole posts to background inspiration for things that never made it into the finished Mansion, but in this case there is enough going on to make you feel like you're looking over Marc's shoulder and observing the creative process, and that's pretty cool. It also means that Lichten's Decorative Art of Victoria's Age rightfully takes its place alongside de Givry's Illustrated Anthology of Magic, Sorcery, and Alchemy as a volume known to have supplied visual inspiration for several different Disney artisans who gave us the Haunted Mansion.

As a final note, I might add that Lichten is (or was) an attractive book. Bear in mind that it was only seven years old when Ken Anderson was looking through it, only fourteen when Marc Davis did the same, and when it was new, it looked like this: 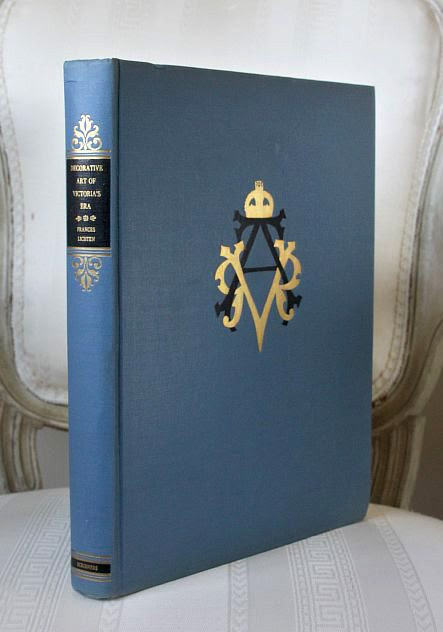 With a jacket like this (featuring a somewhat Crumpish vase!): 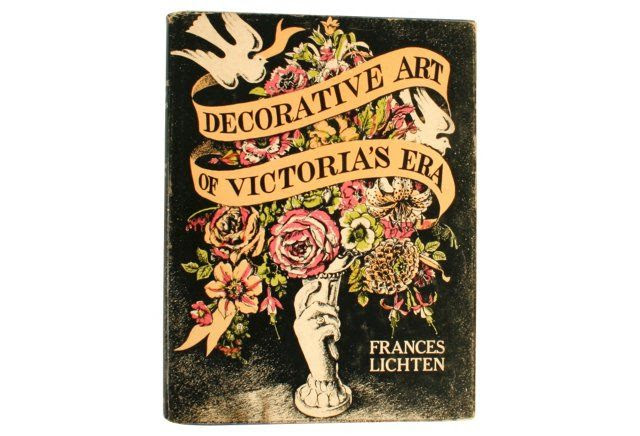 Before you ask, yes, I've looked closely, and no, I haven't found any more HM goodies in Lichten, but I'll look again, just to be sure.