One of the oddest almost-ghosts in the Mansion was brought to light in 2017 by Chris Merritt while doing research for his magnum opus on Marc Davis (Mark Davis In His Own Words, which has come to be known in these parts as MDIHOW, so get used to it). Chris noticed something barely visible in the background of a photo of Imagineer Wathel Rogers and quickly recognized it as a figure previously known only from a Marc Davis sketch:

Anyway, like everyone else I had assumed that it was just another one of the seemingly hundreds of Davis gag ideas that went
nowhere. But not so. Here is the relevant part of the photo Chris found. (That's a sliver of Wathel Rogers on the right.)

In MDIHOW Chris adds something new he's apparently managed to dig up:
a photo showing the above figure being made in the model shop.

Notice the artwork on the wall. The ghost needs a name, so I'm calling her the Squeaky Door Ghost.

What makes the SDG remarkable and worth a blog post is the fact that in every other case that your humble blogmeister is aware of, Marc's "bedsheet"-style ghosts were transformed by Blaine Gibson and his team of sculptors into something more realistic and human-looking. One could illustrate this process with any number of Davis characters, but perhaps the best-known example is Ezra the hitchhiker. As most of you probably know, in the original sketch and even the first maquette (dated 1967) he was a bedsheet ghost: 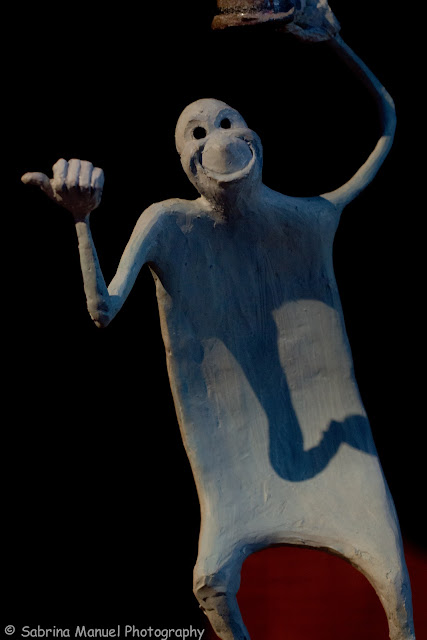 Soon afterwards Blaine Gibson produced his own maquette. The bedsheet
was gone and we had the familiar skeletal figure we all know and love. 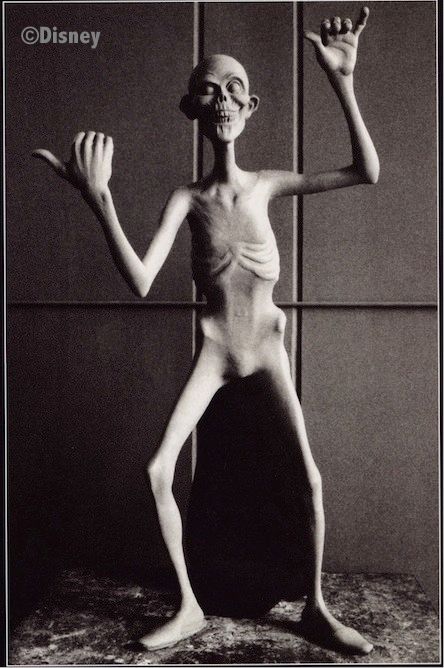 Chris's book furnishes several quotes from Gibson in which he mentions his belief that Walt wanted all figures to be "believable," even if exaggerated or caricatured (MDIHOW 143, 144, 418), and accordingly, it does indeed seem to be the case that he routinely made Marc's human characters (whether dead or alive) less cartoony. Apparently he was able to do this without causing any kind of major fuss, which really doesn't surprise me since Blaine always struck me as a remarkably tactful and unassuming guy. Nevertheless, when it came to this, he always got his way; not one of Marc's goofball ghoulies or bedsheet ghosties made it into the finished ride intact. Marc himself sorta hints at a concession in this area when he explains why his sketches of Halloween witches and bedsheet ghosts whooping it up in the graveyard didn't go anywhere. "They're kind of, you know, cartoon-style ghosts and witches" (MDIHOW 400). 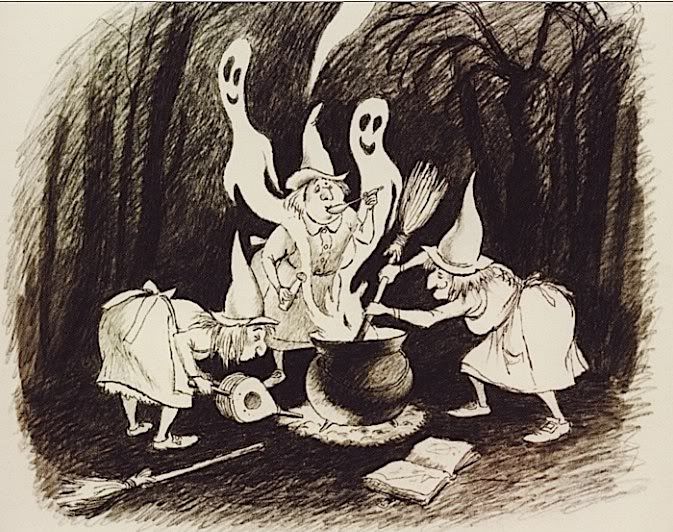 Which raises the question how Squeaky here made it all the way to a full-sized prototype without the slightest modification. It really is surprising. All I can think is that this one somehow managed to slide past Blaine under the radar while he was engaged elsewhere. I can't believe the full-sized Squeaky was the product of anyone in his crew.

The sketch dates from mid-1968, the foam model from early 1969, and the photo of Wathel with the prototype in the background dates from mid-1969, according to Merritt. Based on the provenance of the photo and some of its contents (Florida Tiki Room birds), it's likely that the SDG was intended for the WDW Mansion, and Chris thinks it may have been planned for the Corridor of Doors (MDIHOW 427).

The COD? I wonder. It is true that we don't really know when that immutable dictum, "No Ghost Shall Appear Before Leota" became canon law, but the whole point is that everyone seemed to instinctively understand that rule and abide by it, whether or not it was ever discussed openly, and that is, after all, how the rule came to be recognized as being there in the first place.

Wherever it may have been intended to go, Blaine would have and could have humanized the SDG before it went much further, so...why didn't it?

There is another SDG mystery that is, to me, much more inexplicable. How did it get this far in development, even to the point of possible inclusion in the Orlando Mansion if Merritt is right, when it should have been obvious to everyone that the gag simply cannot be read in an instant, as all HM gags must be if they are to work. Davis explained the joke as a maid ghost trying to put the squeak INTO the hinges, transparently stepping back and forth through the door in the process. The latter element would require a Pepper's Ghost effect, but I imagine that part of it could probably have been sacrificed.

No, the real problem is that the joke would require several seconds of viewing, with a squeaking noise coming and going at appropriate intervals along with some way of signaling to the viewer exactly when the maid was applying oil and when not, so as to make it clear that the noise was being added to the door rather than eliminated. I'm surprised this concept made it off the drawing board, let alone all the way to full size prototype.

For an argument that Squeaky was directly inspired by the "Addams Family" television show, see HERE.