The 50th has been quite a year for Mansionites. Among other things, it has brought to us at LF a treasure trove of new goodies, coming from no less than four different sources, given here in no particular order.

First, there is the "Happy Haunts Materialize"exhibit at the Opera House (where Lincoln is). All in all, it's a relatively modest affair, with just 11 maquettes and 28 graphic artworks on display, along with some informational posters. Much of this art has been seen before, but many of the maquettes have never been put on display previously; likewise, six of the graphic works have never been published and were unknown until now.

Regions Beyond via FB

Second, Chris Merritt and Pete Docter's magnum opus on Marc Davis has finally been published, Marc Davis in His Own Words: Imagineering the Disney Parks (= "MDIHOW").Well worth the 100 bucks or so it'll set you back, consisting of two volumes that total about 750 pages. There is a wealth of Haunted Mansion material in the book. As you might expect, the vast majority of it is Marc Davis artwork, but there is also art from other Imagineers. Much of this has never been seen before. Some has, but only as blurry, washed out photos that often looked like poor quality screen grabs from poor quality videos (for the very good reason that that has frequently been what they were). Anyway, aside from the artwork, the text of MDIHOW requires a rewriting of many a Haunted Mansion meme, including some in circulation here at LF.  More on that later.

Third, Imagineer and Disney historian Tom Morris has been on the lecture circuit, telling tales and showing slides that overturn not a few notions about HM history and providing some fascinating new material. Mansion archaeology?? No wonder we're smiling!

Fourth, my friend Jeff Baham has finally been able to make good on his promise to give his Doombuggies.com website a complete overhaul, and the results are impressive. There is much that is new and different, so be sure to drop by DB dot C and check it out.

What to do with this embarrassment of riches? Well sir, there are so many posts here at LF that will be enriched with new or improved artwork that at this point it almost seems easier to name the posts that will not be disturbed than the other way around!

What I'm going to do is continue to use the Refurbished Posts listing on the right but highlight the many 50th Anny changes by coloring the date bright green. That way y'all can see at a glance what posts have been affected by all this new stuff.

Friends, all of this is going to take some time. Which I'll have more of now, since I'm retiring! [Edit: It's November, and I've finished updating old posts with the new information, 30 posts altogether. I've also fixed bad links and malfunctioning GIFs and the like.]

The remainder of the present post has a modest goal. Since a great many of you will never get to see the 50th Anny exhibit in the Opera House, it seemed worthwhile to show you those artworks on display that have never been seen before. Photographing these things was a bear because the glass of the picture frames reflects light fixtures and—well, almost everything else in the room. My brother and I reduced the effects as best we could by having one of us stand behind the other to block some of the glare, and I also made liberal use of Youtube video footage of the same works shot by others in order to eliminate the reflected light fixtures and other noise via photoshop tricks. You can and should, of course, see some of the many Youtube videos of the whole exhibit, especially for the maquettes, but quite possibly you are not going to find any pictures of the six never-before-seen artworks as clean as you see here.

Three of the new/old works previously unknown are from the "Father of the Haunted Mansion," Ken Anderson, and date to 1957-58, when he was busy at work on the fledgling attraction. This first one shows a floating head in the air:

"Whistle . Cold Wind" it says in the corner. It's not hard to see in this important work the ultimate prototype of such things as the organ banshees and the blast-up heads. One Mansion Imagineer duly impressed with Ken's idea was Claude Coats, as can be seen in his ballroom concept art (also on display at the exhibit, incidentally).

Another Imagineer much impressed with Anderson's concept
was X Atencio, as we shall presently see. On to the next...

You owe me big time for this one, folks. Its placement high on a wall made it all but impossible to photograph without reflected light fixtures all over the place. I used shots from lots of different angles and patched them together to form a single image.

What I think is going on is that people see their own reflections in a large mirror and are presumably horrified at how pale and ghostly they look. Anderson is here going all the way back to a nineteenth century trick used in the Cabaret du Néant. At one point the guests there saw their own reflection in a mirror in a coffin and were shocked by their appearance. The effect is easy to do. Just make sure the lighting is a sickly greenish-yellow color and people look appallingly cadaverous. They of course don't know that they look this way until they see a mirror.

Speaking of mirrors, Anderson knew all about two-way mirrors and their potential for ghostly effects. Here, the onlooker (inlooker?) is surprised to see her reflection overtaken by the visage of an old witch, accompanied by "Hysterical Laughter."

Here's a version you can add to your Ken Anderson HM artwork collection:

Four sketches from X Atencio's "one-eyed black cat" concept artwork are at the exhibit. You can bone up on this chapter of Mansion history HERE. Suffice it to say that a mysterious eye appears, then a sparkle and an eye together, and then a cat's face, revealing that the eye is his and the sparkle is from his empty eye socket. This morphs into the visage of a rotting, screaming skull. The cat face sketch was published long ago, but the screaming skull sketch, I'm proud to say, was first published here at LF. However, the coloration was way off (not my fault; it came to me that way). The sparkle & eye sketch has now been seen for the first time in the Main Street display, plus an additional sketch of the screaming skull. 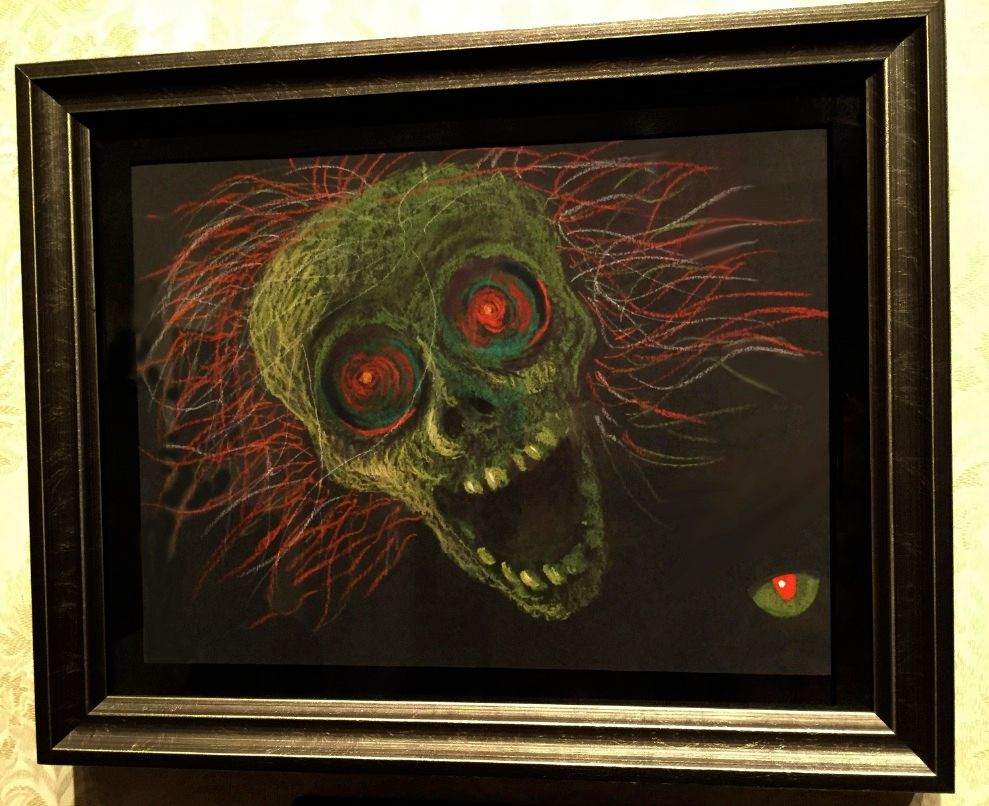 Curiously, there are quite a number of X Atencio and Ken Anderson artworks out and about and published in books and magazines over the years that are very, very blue, but when you see the originals the blue is actually light brown. Don't know why that is, unless the person who originally released them distorted the color intentionally so as to be able to prove that this or that reproduction is actually his, published without crediting him or getting his permission. That's a guess.


Here's the second screaming skull sketch, to my knowledge never seen before anywhere:

Yeah, that one came out good.


I thought it looked familiar, and sure enough, it turns out X is copying verbatim
a rotting skull prop created by Yale Gracey, which we've looked at before: 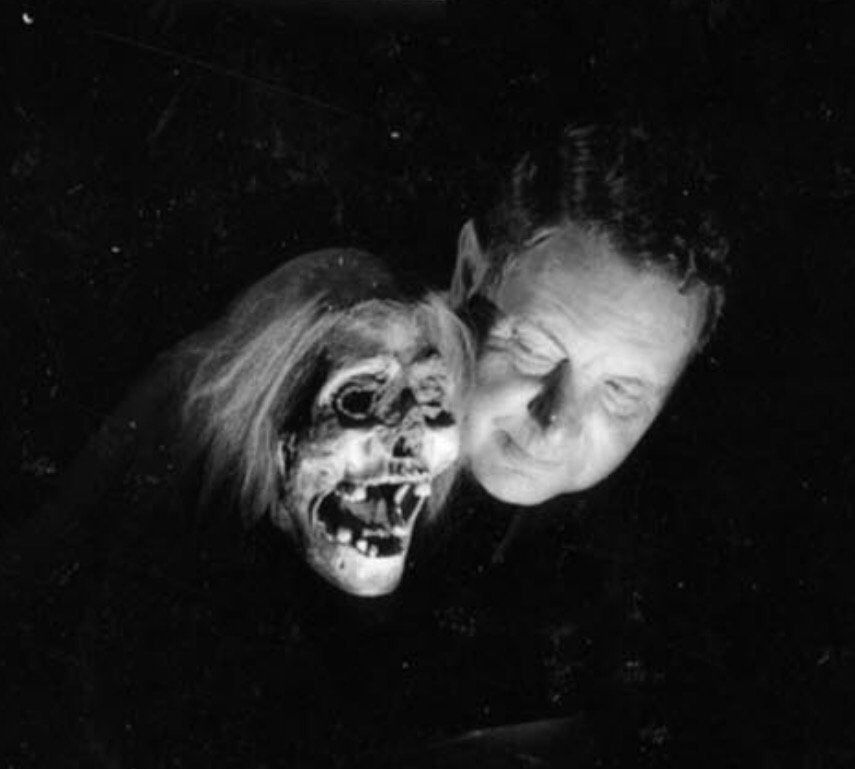 In 2017 it was discovered to everyone's astonishment that Yale's sons had actually saved this prop in a
box which labelled it as a Hatbox Ghost prototype. Jeff Baham actually got to handle it, the lucky bum.

It was on display at the Doombuggies "Sóiree" event held on August 9th of this
year, now kept safe from the unclean hands of us mortals in a plexiglass case:

Anyway, compare the eye sockets and especially the teeth with X's sketch:

I said X's SKETCH, you mundane noodle.
I swear, Siri hates me.

I don't think there's any question but that he directly copied Yale's prop. Incidentally, it's obvious to me that it's a real skull. They had no qualms about using real human bones back then. I'm sure that many of you know that they used real skeletons (eventually replaced with fake ones) when they built Pirates of the Caribbean. It's not an urban legend. [Edit: It occurs to me that the whole thing could be paper mâché, and also, it does look a little small, but... I don't know... those teeth....]


So, what does this mean? Did X envision using this prop when he developed his "one-eyed black cat" story idea? Was it going to float about like the head in the old Ken Anderson sketch we just looked at? Whatever the truth is, yet another layer of intrigue now surrounds this sacred relic.

Our last piece of previously unknown artwork is an X Atencio sketch of a miniature man in a bottle: 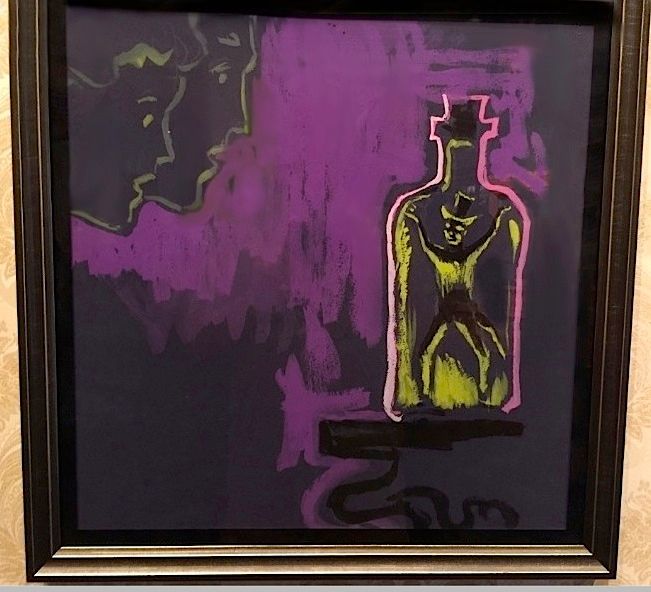 As it happens, this sketch from MDIHOW proves that this is another example of X taking an idea from Yale Gracey. Atencio was inspired
by a drawing found in one of Yale's sketchbooks. If there's any doubt in your minds about that claim, look at the shape of the bottle:

Yep, it's the old Pepper's Ghost illusion. This would have looked pretty cool, huh?

More is coming, so it's very much "watch this space" at Long-Forgotten once again.