To Find a Way Out, or Maybe Two or Three

.
This is yet another sequel to one of my favorite posts here at Long-Forgotten. To really appreciate what we've got here, you should probably refresh your memory by taking a stroll down memory lane HERE and HERE. The discoveries made here required an updating of the original "To Find a Way Out" post.

A few years back, retired Imagineer and now Disney historian Tom Morris uncovered something truly long forgotten and presented it as part of his lecture tours in 2019. Tom was kind enough to share with me further details and photos pertinent to the subject at hand, so I and you owe Tom a note of thanks.

When they started pouring the concrete for the façade building of the Disneyland Haunted Mansion in 1962, they naturally poured the foundational, perimeter walls in accordance with what they thought at the time the attraction was going to be, which was a twin walk-thru. As we know, the two elevators were for two back-to-back, essentially identical walk-thru adventures, at the end of which guests would ascend a set of steps to an enclosed graveyard area, where they could look around among the tombs and stuff for awhile before exiting through turnstiles. 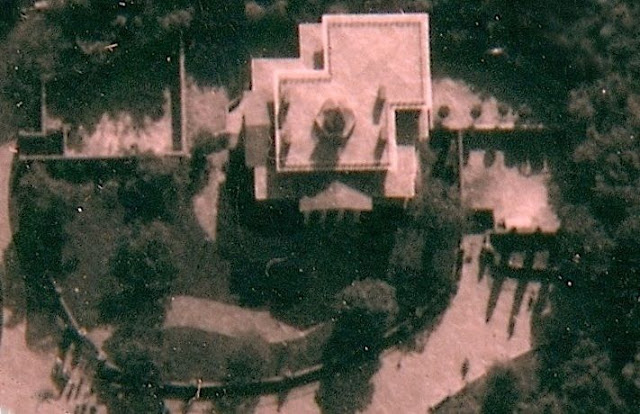 The two enclosed areas eventually became a queue area on the south side . . .

. . . and the exit complex of mausoleums on the north side. The original walk-thru
exits became the "chicken exit" on the south side and an emergency exit on the north.
Most of you knew all of that. And if you didn't, you did after reviewing those old posts.

What you may not have known is that in 1961 they were still playing around with several options for getting folks up from the basement level and into the graveyard spill areas on either side. At the time they poured the foundational walls they thought they might have THREE exits on each side. In this photo, looking across the railroad trestle that will eventually be a tunnel covered in earth, transformed into the berm behind the house, you can see two openings in addition to the main opening, the one that eventually led to the "chicken exit" in the graveyard. (That one is boarded up in this shot.) 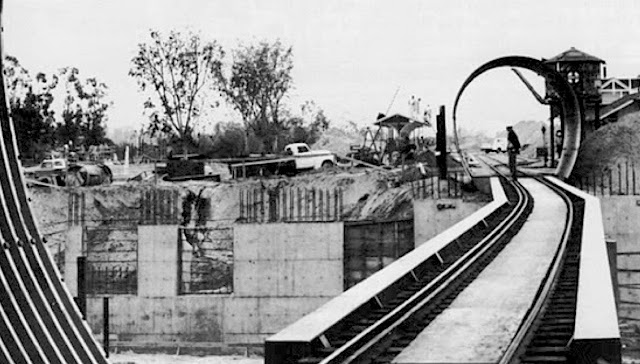 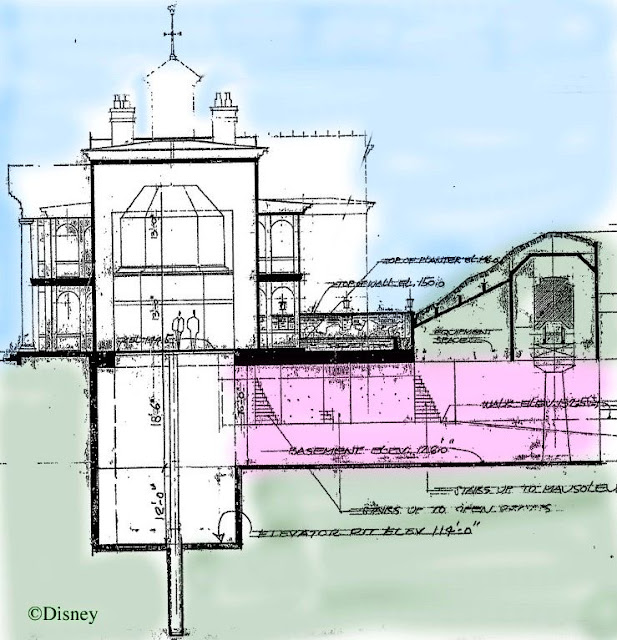 The three staircases beneath the house are visible in this blueprint,
which apparently shows only the exits for the southern graveyard.
Those were put there because at the time they thought they might have guests finish the tour in a large room beneath the house, where the Ghost Host would taunt them about "finding a way out," a line that became infamous when it ended up as part of the stretchroom spiel. According to a 1961 "Haunted House Show Outline," after the GH leads the audience into the basement area, he says:
"Now you are on your way out . . . Here's your way out . . . I found the way out . . .
This way out . . . All paths lead to the same end.  Ha! ha! ha!"
The outline then continues:
Voice shows the audience way out thru one positive central control exit. Audience is now free to find their own way out. Secondary exits from main control exit carries audience up thru graves, crypts and vaults to outdoor cemetery. This area is to be walled in and not seen by public at Disneyland. Area for final exit turnstiles in cemetery wall.
Um . . . that's not exactly crystal clear. What would happen is that the guests would find three doorways to choose from. The impression I get from the spiel is that the GH's voice would switch from one speaker to another, over each doorway. It didn't matter which one you picked, because all three had stairways going up to the enclosed cemetery, and that's why they left openings for three entrances in the perimeter walls. These stairways are actually drawn in on some blueprints. I've traced some sketches directly from those, so trust me, you can take these to the bank. 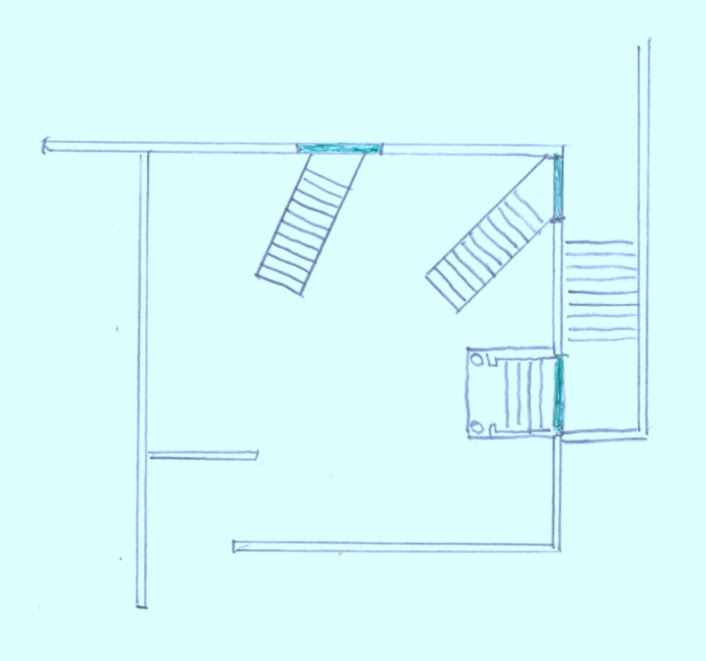 This is obviously the north side exit area. Two of the holes (here in teal) were eventually used, of course. The top one was for the speed ramp rather than this plain staircase, and the right side was eventually used just as it is shown here, becoming the emergency exit on that side. The third one, in the corner, never happened, but the hole in the concrete did not get filled in until the spring of 1969!
The story is much the same on the south side. There was going to be a crypt, a twin to the one on the north side, but instead, what is now the emergency (chicken) exit was made to be flusher with the wall. It's the two staircases that grab our attention. The holes in the wall didn't get filled in until the spring of 1969 either. 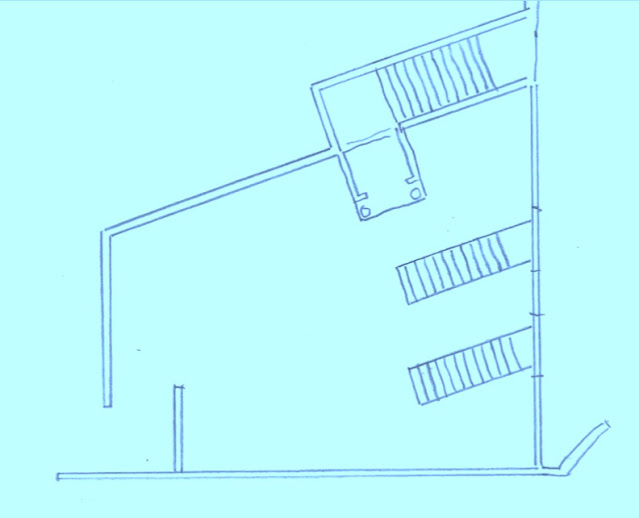 The two additional staircases couldn't just pop straight out of the ground like that, of course.
There would have been some appropriate staging for them. Fortunately, they appear in another
blueprint which actually has a few rectangular shapes thrown in, simulating tomb slabs: 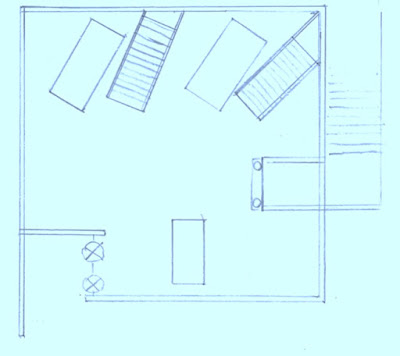 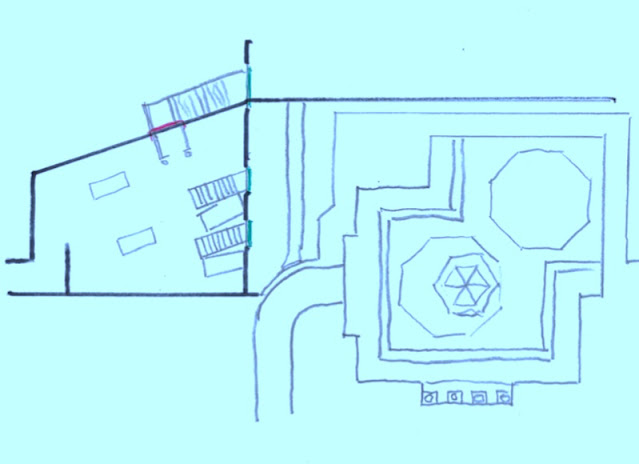 For the umpteenth time, here is that Duane Alt sketch that shows what they had in mind. Most of
the time this piece of artwork is printed or displayed, the bottom is cropped, which is a pity, since
it is there that you can see how they planned for some of the crypts at ground level to be open. 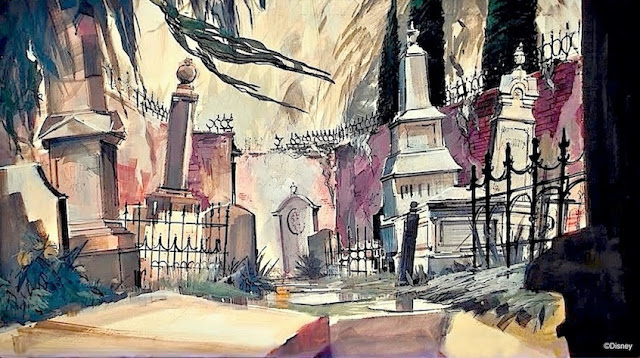 Something similar may have been planned for the other side, if it's safe
to squeeze clues out of this Collin Campbell artwork we've seen so
many times before. It probably isn't, but whoever said life was safe? 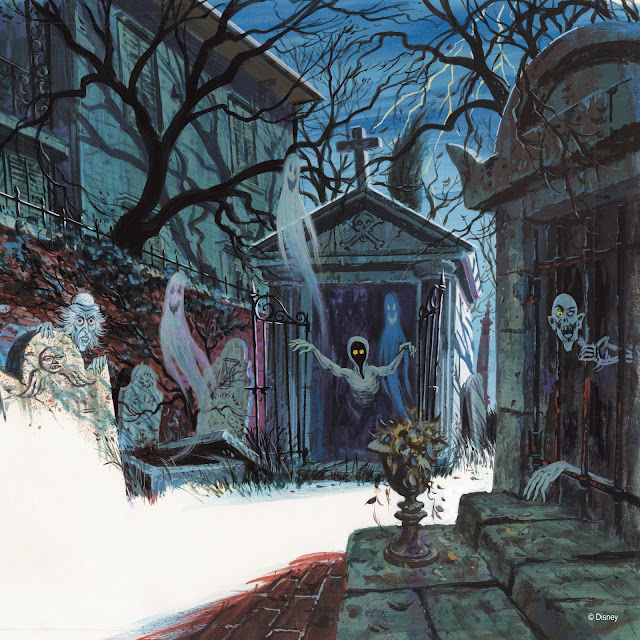 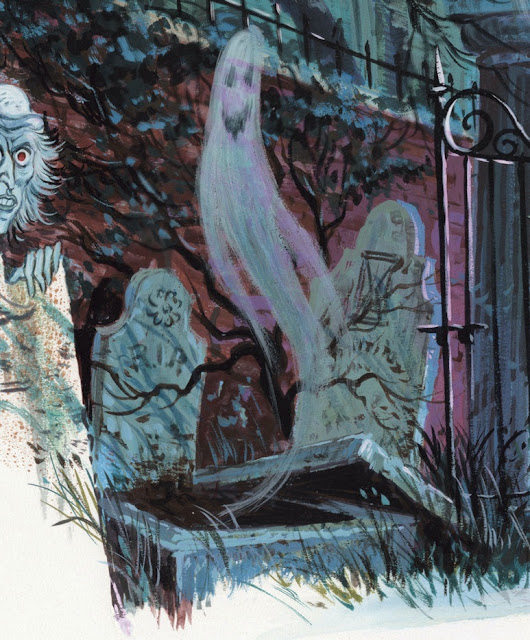 I imagine the designs would have been based on real-world examples, like this one: 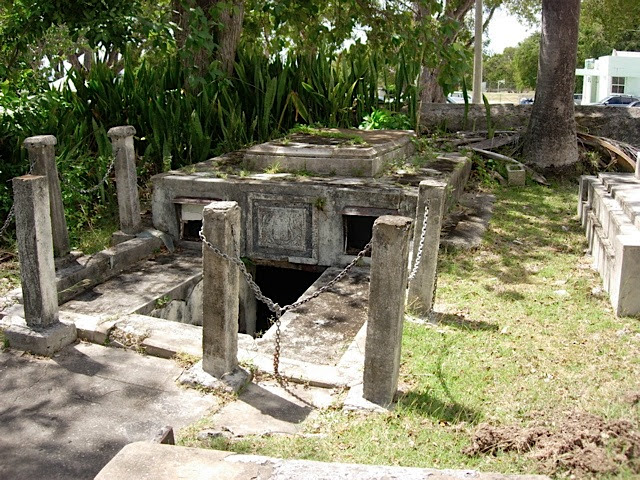 Just as the existing emergency (chicken) exit is based on real-world examples: 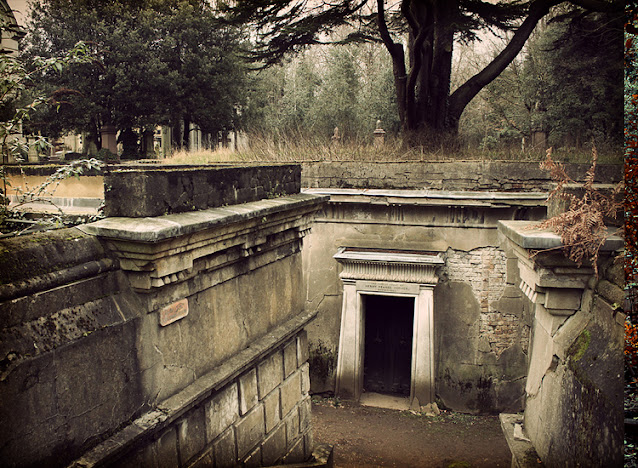 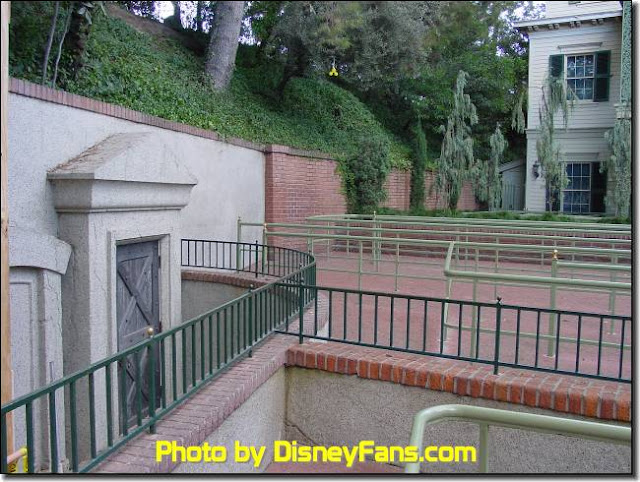 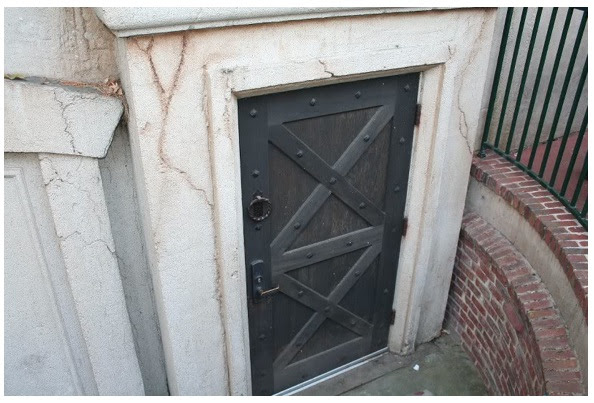 It is important to understand that these southern holes for additional staircases that never materialized
are below ground level. Above them there was a solid brick wall, probably into early 1969. 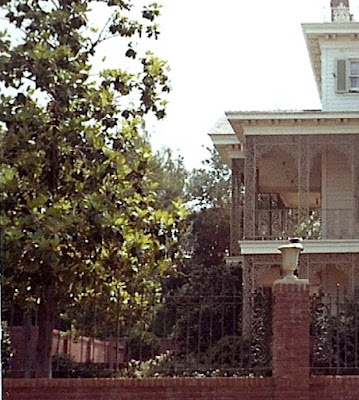 The difference between what is and what was being constructed in 1962 can be seen this way:

This photo from Tom, originally belonging to "Cousin Victor," shows in the northern graveyard the hole
for the speed ramp on the right. Gives you a good idea of where these holes were, vertically as well as
horizontally. (Just ignore that hole on the left; that's for stuff like heating and air conditioning access. 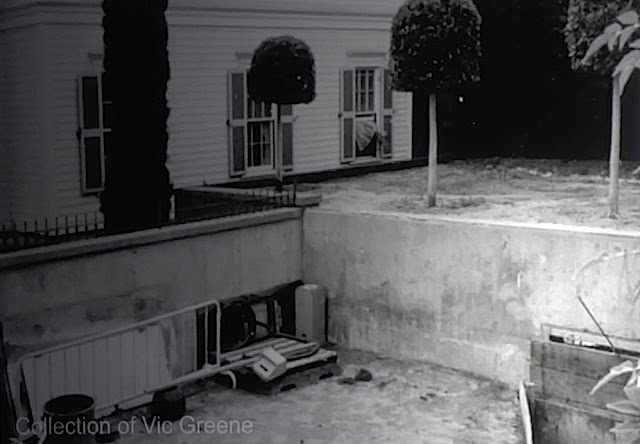 Another shot of the speed ramp hole: 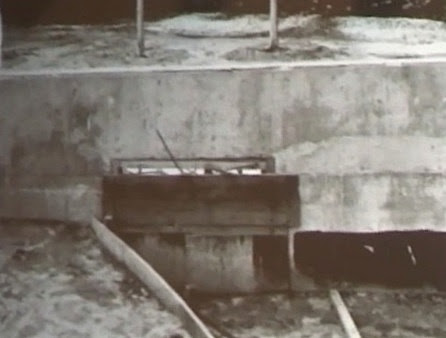 A shot from the inside, looking up at that same hole: 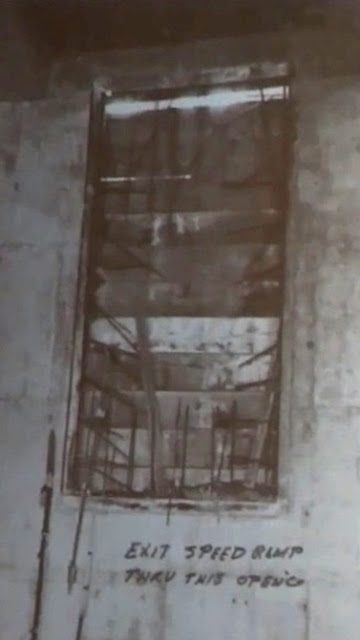 There is no evidence that the triple exit system ever went past those 1962 blueprints. In fact,
the staircases are all labeled as "future construction," and there doesn't seem to have been any
attempt to sketch out how they would have sprouted from the main exit room beneath the house.
This system just happened to be the latest idea at the time of the concrete pours.
*******************
Posted by HBG2 at 3:52 PM