Sometime in the very late 1970's, the face of the original Corpse Bride at Disneyland
was changed. This was the new look: a blackened face with hollow, round eyes.

I now think (2019) it will be most helpful to refer to this version as
the "black faced bride." It looks like her entire head was changed:

How different did she look? Here are a couple of side-by-side comparisons to help you imagine: 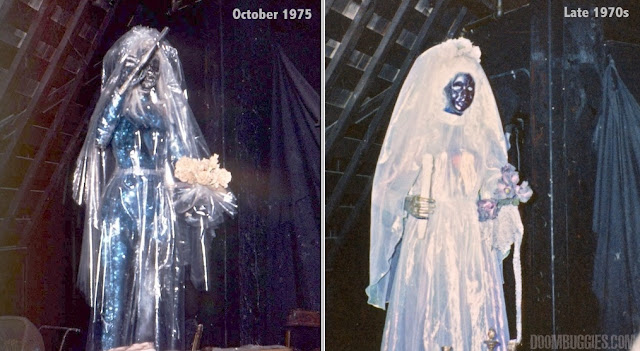 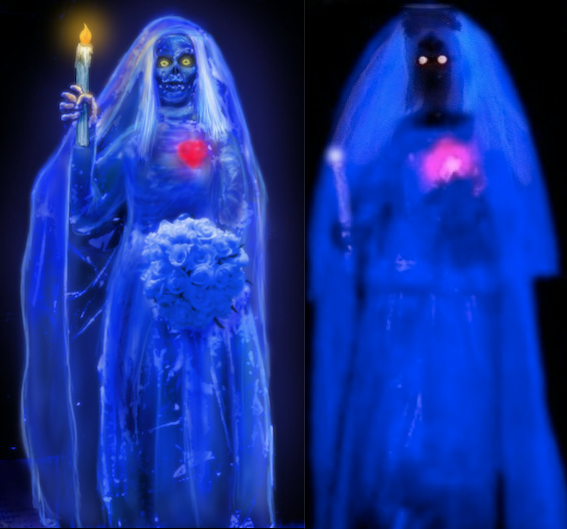 When the black faced bride debuted, it was obviously a throwback to some earlier Marc Davis concepts (see Part One). The Disneyland story is slightly different from the Orlando story, so we'll tell them one at a time.  That one at the top of the post is a Disneyland photo. Hey, how about a "magic eye" 3-D image?  Get used to these, folks; I've got a million of 'em.  Use the practice thingy over there on the right and maybe you can get the hang of it if you can't already do it.  At worst, you get two images for the price of one, so what is there to complain about?  From 1990:

For many, including your blog administrator, this is still the classic bride.  She's scary precisely because she is ambiguous.  Is she evil and threatening?  Or is she forlorn and tragic?  Is she gonna get you or is she going to plead with you for help?  The candle suggests a searching figure, which in turn suggests victimhood.  Bad guys don't search around with candles; they LIKE it dark (see John 3:20).  But I dunno, Beating Heart still gives you the creeps.  Indeed, she's the number one suspect in the murder of the Hat Box Ghost, but since he's gone, she's what the FBI calls a "person of interest."

In September of 1995 (many sources erroneously date this to the 80's), the Imagineers decided to beef up the attic scene (unnecessarily, in my book).  They put in a phantom piano player plunking out a distorted wedding march and made the pop-up ghosts stop their screeching and start yelling "I do" in a mocking sort of way. They replaced the bride's black head with a blue one. It looks kinda green in this photo, but in others it is more clearly a pale blue.

The idea, I guess, was to give the bride more of a personality.
This widely-reproduced photograph makes her look kind of sweet.

Maybe too sweet.  Here's another shot in which she looks a little tougher:

Pulling her veil down over her face somehow made her look scarier. These shots by professional photogs make it easy to compare "black face" with "blue face." With the veil, I'll grant that blue looks creepy, but still not as creepy as black.

In 2006 they overhauled the attic yet again, replacing Beating Heart and the pop-up groomsmen with Constance and her grisly wedding portraits. The ambiguity is now gone; she's threatening and definitely not forlorn; plus she's something that no other version of the bride has ever been: comic. People definitely take sides over Constance. You like her or you don't. Me, I dislike having a full-blown storyline foisted on me, excluding me from the imaginative process and making me a spectator only. That makes it boring. And that's without even considering how well the character fits into its context (meh) or how well the effect is executed (double meh). We'll talk more about Constance in an upcoming post.

I would vote to bring back Beating Heart in a heartbeat.

UPDATED June 2020: As best we can piece together the clues, the Orlando story goes like this: The bride started out as a milder version of the Corpse Bride, but with slit-like eyes. They must not have liked it, because that version lasted only about two years. In 1973 (as best we can tell), they opened her eyes (almost made them round) and eliminated the Corpse Bride look in favor of the dark-faced version, several years earlier than Disneyland's bride. At least in photos, the black-faced version looks not so much black as very dark blue, as in these Kenneth Sundberg shots from '89 and '90.  They played around with the veil and the bouquet quite a bit in Orlando as well.

This widely-reproduced pic is undated, but she looks a lot like the '89 model above, except veiled.

The real revolution came in 1997, when she got her pale blue face. Unlike DL's blue-faced version, the Florida bride also got a wild hairdo, and she was finally elevated off the floor like Anaheim's bride, giving her a floating effect. Fans were installed to billow out her dress and hair.

Speaking of fans, a lot of Orlando Mansion freaks didn't really like this version ("the smurf bride"), preferring the spookier Disneyland version. The Imagineers were continually tinkering with her face, and unfortunately the figure frequently fell into disrepair (a big problem at WDW in those days). Here she is in 1997 or 1998; in 2001 (+ or - a year); and in 2006.


"Smurfette" is probably a little unfair.  Some people who were there tell me she
actually looked pretty good, at least at first, and some photos bear this judgment out: 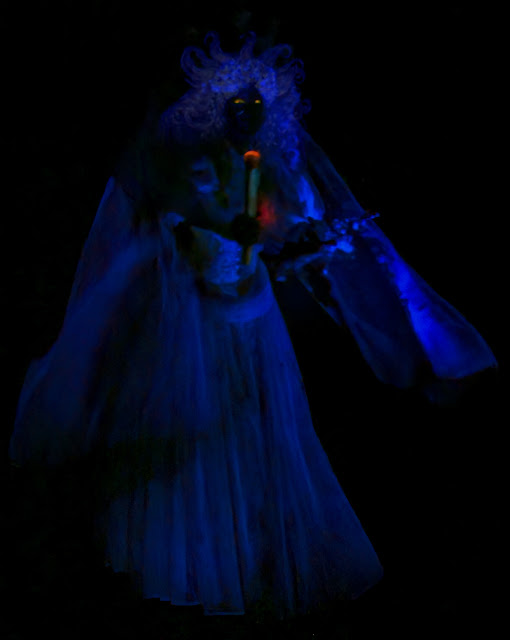 But just as was the case at DL, the blue-faced bride tends to look less threatening than forlorn (yes, I realize I'm overusing that word). Oddly enough, with the popup ghosts, WDW did the opposite of DL. Whereas the Ahaheim spooks were dressed the same as always but now shouted "I do," like groomsmen, in Florida they were dressed as groomsmen, but they screamed and screeched the same as always. For some reason Orlando was spared the "I do's."