The overlap between Lewis Carroll's Alice books and the Haunted Mansion is almost nil.  To date, I think that the closest connection I have found between the HM and anything at all related to Alice would probably be the scary Dandelion popup in the flower garden of the pre-1983 Fantasyland ride, a direct ancestor to the popup spooks in the Mansion's graveyard 11 years later. That sure ain't much, is it?  We've talked about it before, but as long as the subject has popped up again, I've got an update:


Until recently, the only available picture of the Dandelion showed just the top
of his head, before he rose up. But recently a rare photo has come to light: 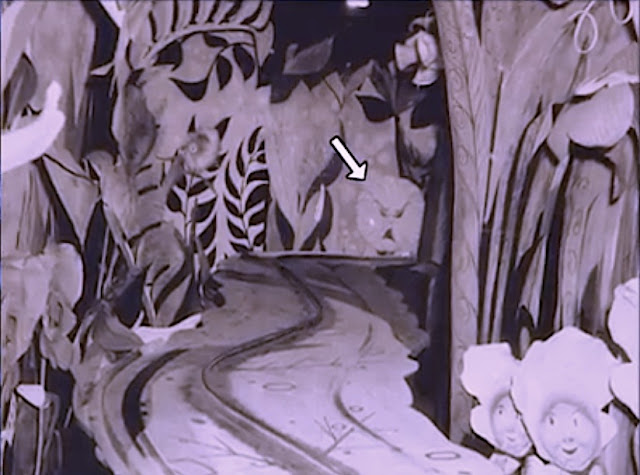 Combine that with the previously known photo, taken from almost the same spot... 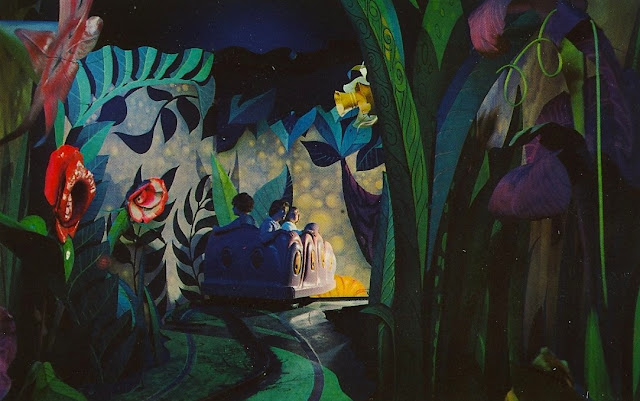 . . . and maybe we can cobble together something a little more vivid: 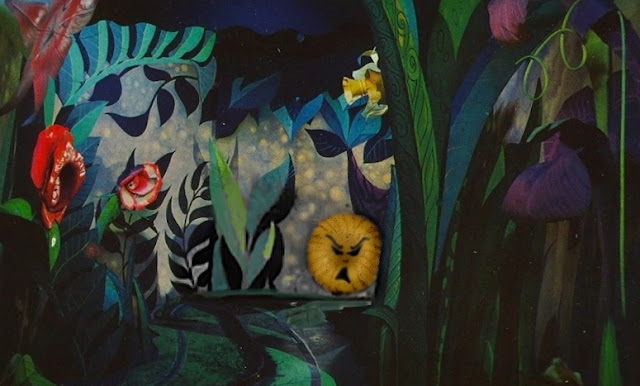 The Dandelion appears only briefly in the movie, and there he is an amiable character. Here, he let out
a loud, terrifying roar, and he had his leaf/paws lifted in a threatening manner. You can't see this in the
newly discovered photo, since he's only about half-way up, but you can see it in a ride layout drawing: 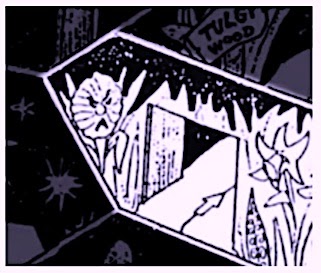 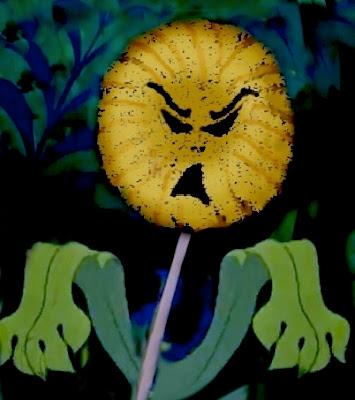 In addition to this, in that earlier post I discussed how the Mansion Imagineers at one point considered incorporating the idea of making the guests feel tiny in an oversized environment, a concept used effectively in the Alice ride. Ultimately, they abandoned the notion.

Now, you would think that the Alice books might at least have exercised some influence over Rolly Crump's "Museum of the Weird," wouldn't you? The surrealism, the absurdist humor, the impossible animals, the whimsy, the fantasy, the Disney rights—c'mon, it's a natural! We know that Rolly drew inspiration from the phantasmagorical films of Fellini and Cocteau, so why not Alice in Wonderland or Through the Looking Glass?

Well, as it happens, it may just be possible that Rolly did take inspiration for the Museum from a pair of John Tenniel illustrations for the Alice books. Since the Museum never came to realization, that means we are talking here about a footnote to a footnote, and usually I balk at such, but this is the freakin' Museum of the Weird we're talking about, not just any old failed concept, and if like me you're a huge fan of both the Museum and the original Alice books, there is some genuine satisfaction to be had in thinking that maybe, just maybe, the former may have drawn some inspiration from the latter, be it only lightly, or slightly, or ships-passing-in-the-night-ly.


The piece I have in mind is this sketch of the Museum's séance room, which we've all seen many times before: 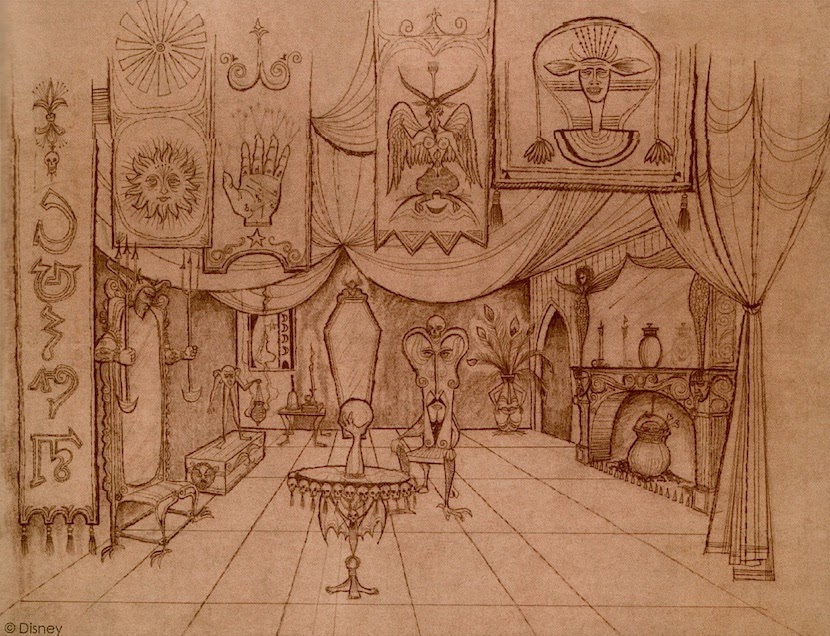 And the Tenniel sketches I have in mind are these, from the first chapter of Through the Looking Glass: Among the details inserted by Tenniel (they're not in the text) are the faces
on the clock and the vase, which only appear in the "looking glass" house.

(Incidentally, many readers fail to notice that a face has also appeared in the ornament over the fireplace.) 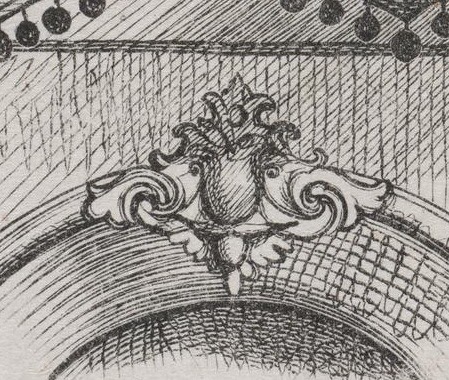 (And if you want to argue that the clock inspired Cogsworth, be our guest.) 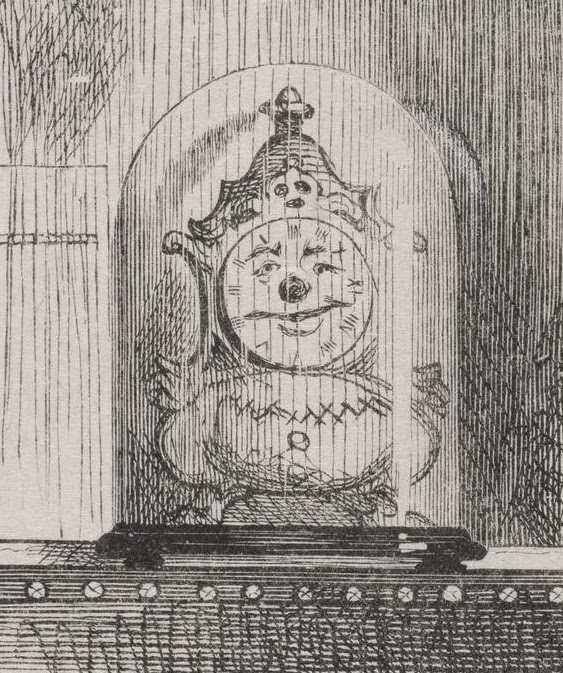 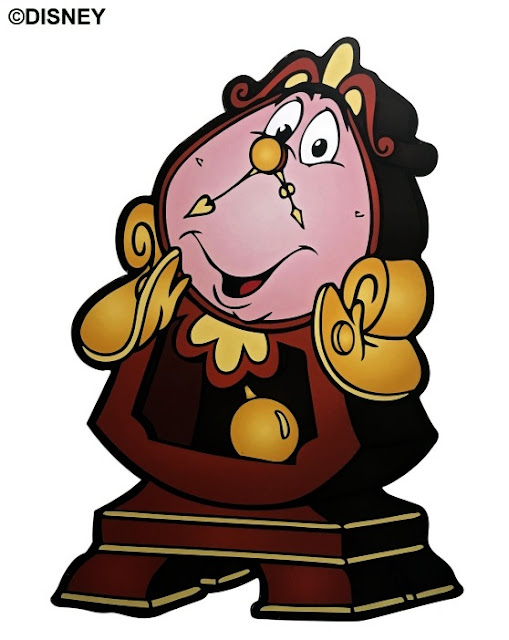 The Face and the Vase

We are not interested here in those items. This is the one I want to focus on: 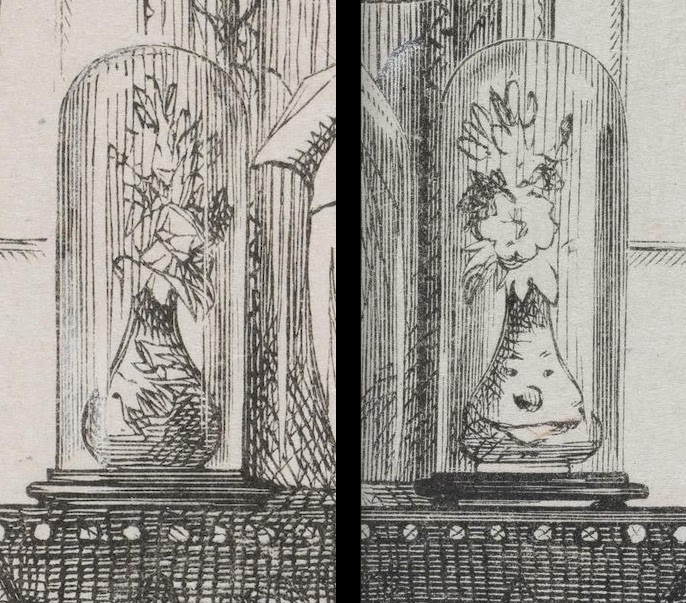 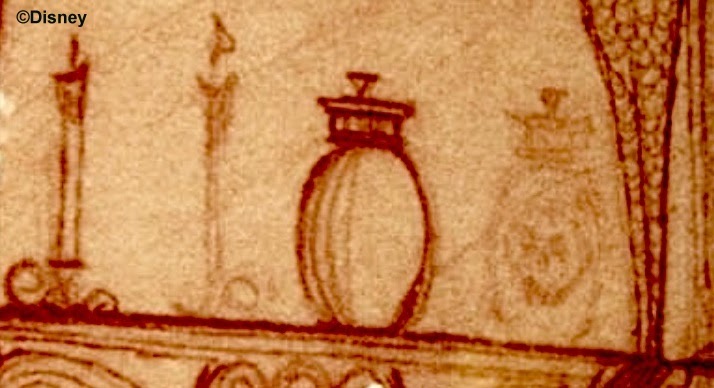 The parallel is not exact, but still, I have to wonder whether Tenniel's sketch was at least an un- or sub-conscious influence here.
After all, the Alice artwork is hugely famous, and the books are dream-fantasy classics.  Rolly was undoubtedly familiar with them.

Rolly's face is actually a skull, of course. In this there is nothing particularly weird about the Museum thereof. Victorians were fond of putting all kinds of things under bell jars. Not just floral arrangements and clocks, as in Alice, but virtually any old curiosity they might have sitting around, including human skulls. 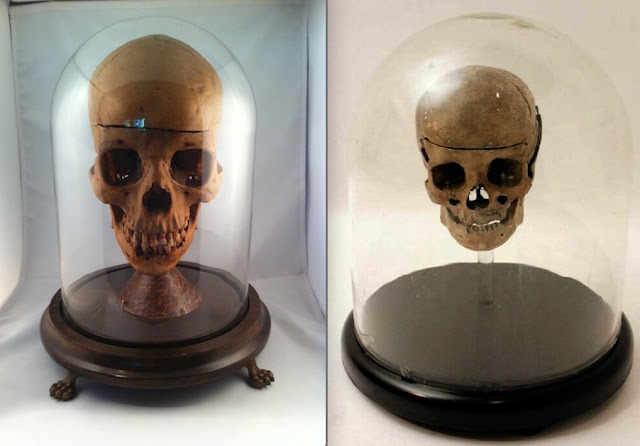 In fact, these things were common enough that Marc Davis decided to include one in a Mansion sketch. 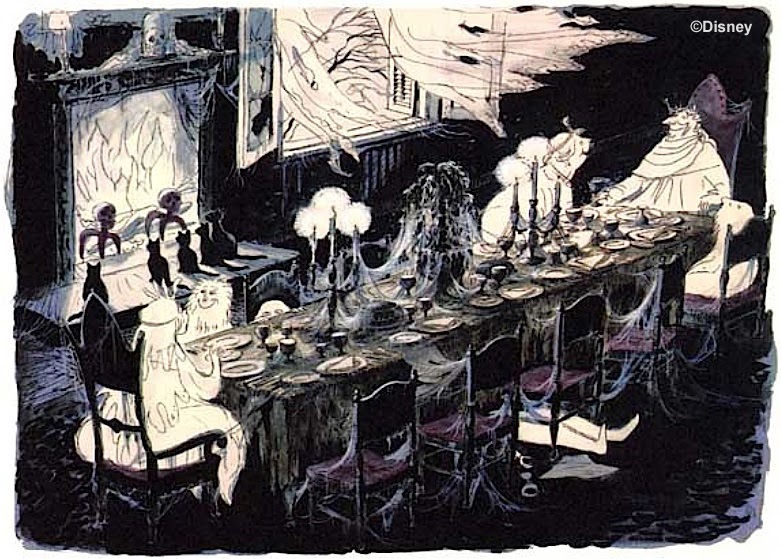 Anyway, is there anything else in the Crump sketch that might support our suspicions?  Maybe.

Rolly's crystal ball is held aloft by a hand. He apparently liked this feature. You find
it in all of his Museum sketches as well as in a maquette he and Jack Ferges made. 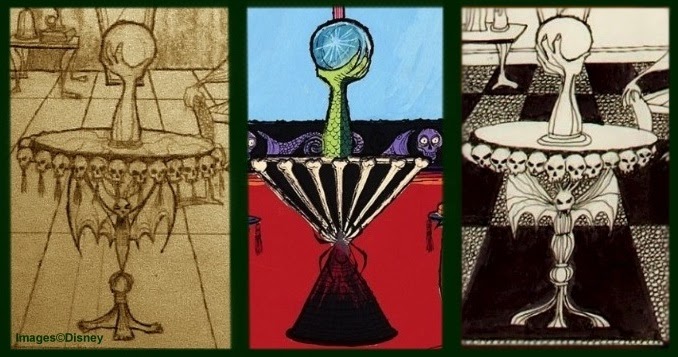 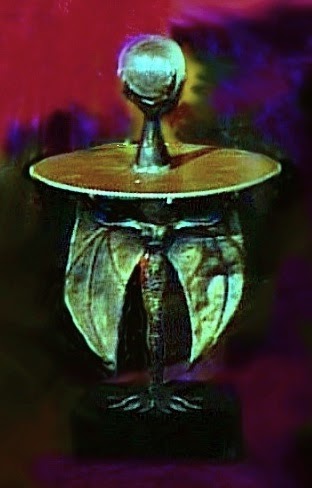 Now take a look at the other Alice sketch, the one before she enters the looking glass: 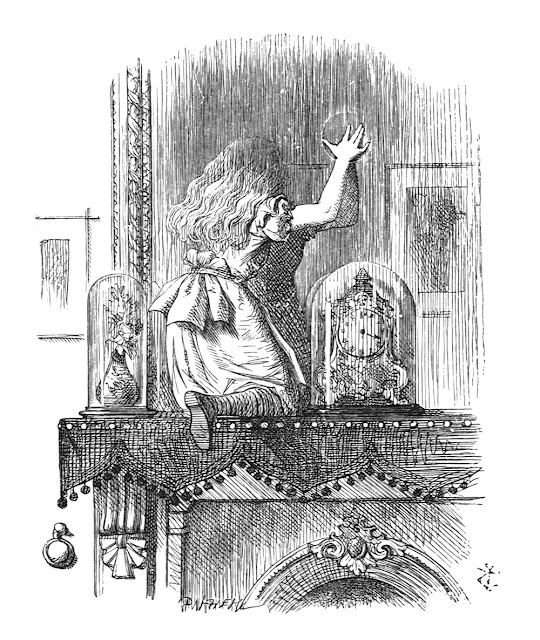 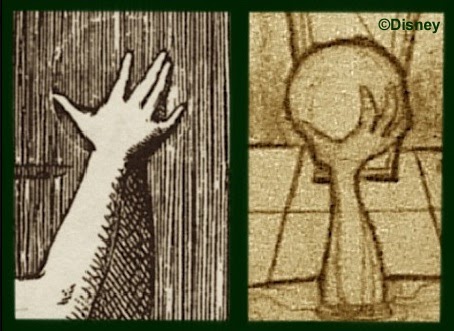 Yea, verily, this could be nothing more than an optical coincidence. Luckily, I don't
have to actually prove anything here. I'm just having fun floating the possibilities.
As always, you'll have to decide for yourselves if anything is going on. YMMV, etc. 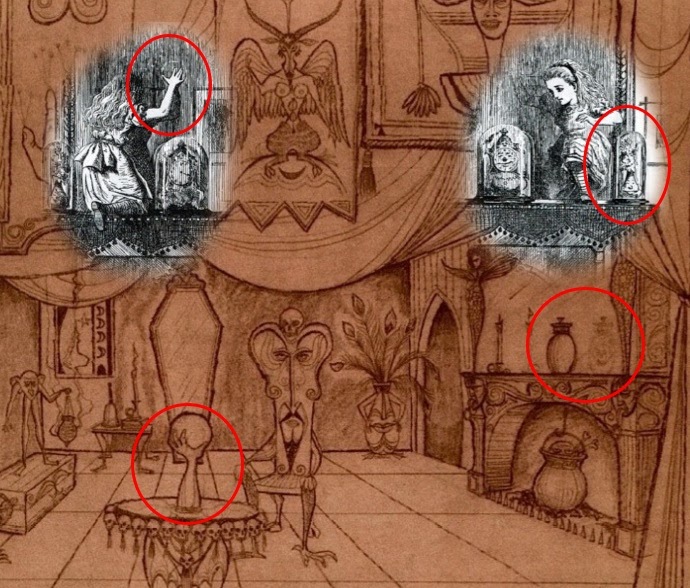 A Fly in the Ointment?

Roh roh. It is my solemn duty to inform you of a historical wrinkle that threatens to put an end to our little game.
As it happens, the mysterious circle around Alice's hand is not always visible in reproductions of Tenniel's drawing. 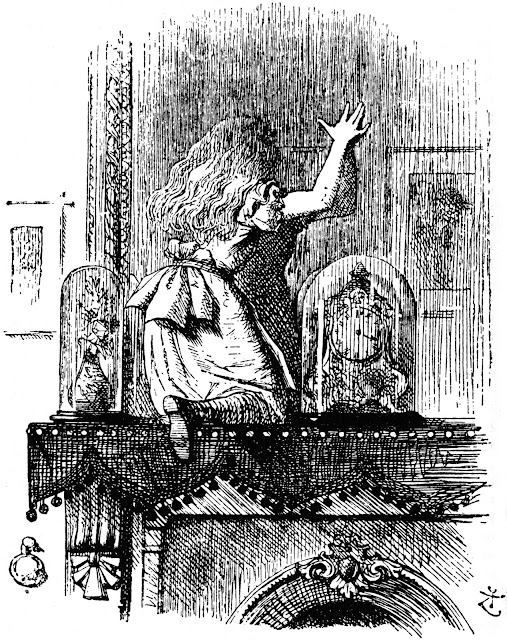 Unless you're a passionate student of Tenniel's Alice work, you may not know their intriguing history. It seems his original illustrations were engraved on wood blocks (by the Dalziel brothers; that's why you see the name "Dalziel" at the bottom of some of them). But the Dalziels convinced Tenniel that because his work was so delicate, it would be better to use the wood engravings as masters from which electrotype copies could be made, producing copper plates that would last longer. And that's what they did. The problem is that the books were so popular and went through so many printings that the plates got worn, and the quality of the illustrations in Alice editions deteriorated over time. But as chance would have it, the original wood engravings were rediscovered in 1985, pristine and unused! Multiple new sets were soon made from them.

What it all means is that Tenniel's illustrations in the more recent editions of the Alice books are sharper and more detailed than in previous editions. Since this all happened long after Rolly did his Museum sketches, one has to ask: Was it even possible for him to see the circle around Alice's hand in the murkier editions of Through the Looking Glass available to him in 1964?

Somewhat dejectedly, I did some investigation, and contrary to what I expected, I discovered that the visibility of the circle does not seem to depend upon whether the illustrations were printed from muddy, pre-1985 plates or sharp, post-1985 plates. Here it is in a crappy old print: 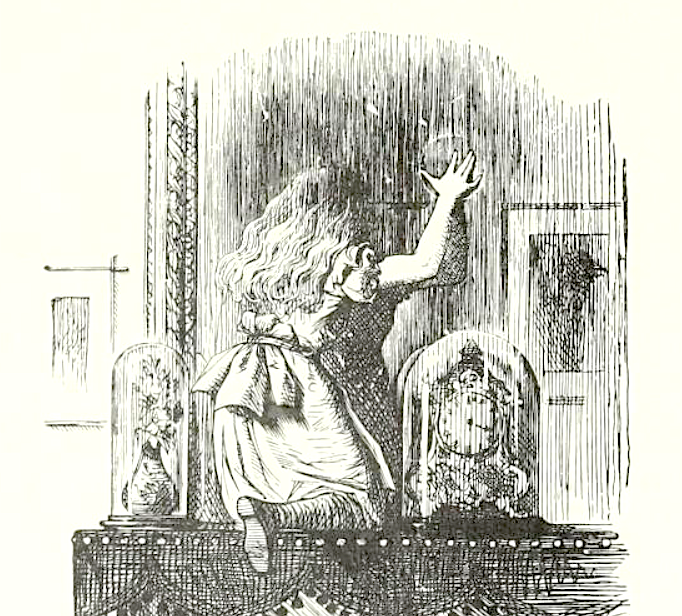 So yes, Rolly could certainly have seen this. That being the case . . . (brace yourselves for the massive qualifier) . . . we cannot altogether dismiss the possibility that it was a subconscious influence, along with the vase-with-face in the mirror. Again, I admit to being biased in favor of the theory, because it just seems so fitting that the world of Alice and the world of the "Museum of the Weird" should meet at some point.

Email ThisBlogThis!Share to TwitterShare to FacebookShare to Pinterest
Labels: Alice in Wonderland, John Tenniel, Museum of the Weird, Rolly Crump