Who doesn't want to draw a haunted house, especially if you're a good artist and you can?  Perhaps half a dozen different artists took a whack at conceptualizing the Disneyland haunted house between 1951 and 1961.  That may or may not be a record, but it's really not surprising.  As many of you know, even in his earliest ruminations Walt wanted to include a haunted house in any future amusement park he might produce.  This was back when "Disneyland" as we know it was not so much as a twinkle in his eye.

Some of these images are well known, some less so, and some not well known at all.  I thought it would be a nifty idea to gather all of them together into a single location, which I don't think anyone has done before.

It all starts with Harper Goff's 1951 sketch.  I'd classify this one as "pretty well known."  There's no attempt here to figure out how the thing would actually work as an attraction.  This is just concept work. 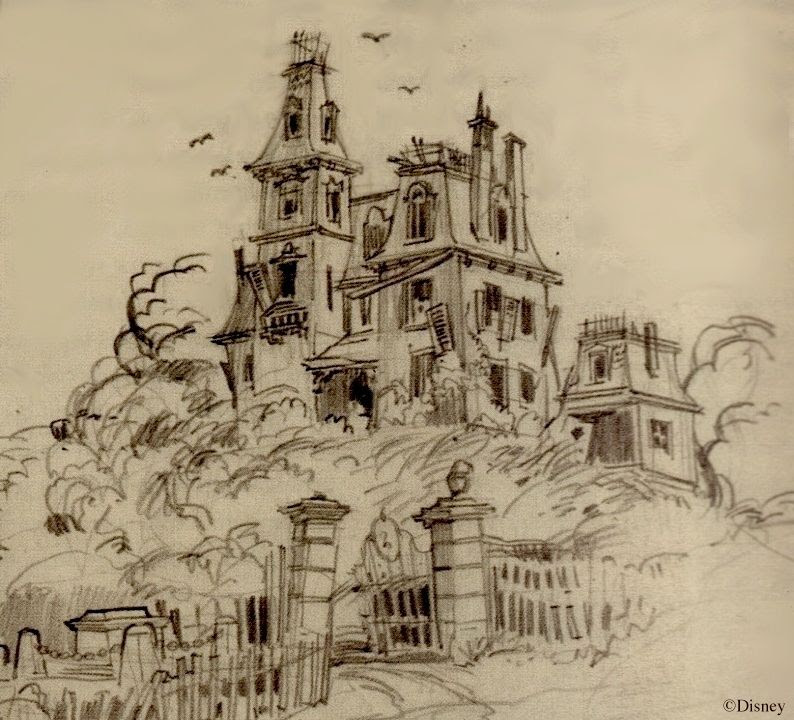 At first the haunted house was going to be on Main Street, an "old-dark-house-at-the-end-
of-the-street" kind of thing.  This 1953 sketch by Dale Henessy is not as well known as Goff's. 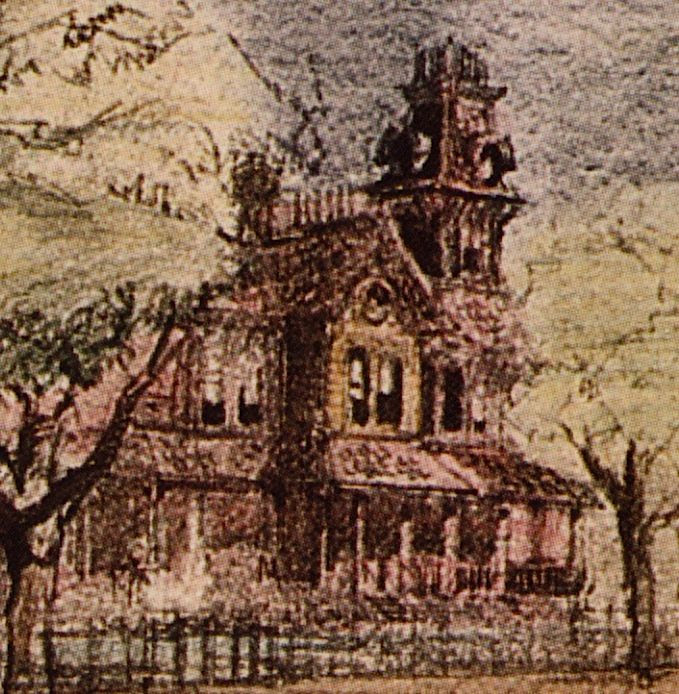 It's because of this Henessey sketch that I am now convinced that Herb Ryman,
under the personal direction of Walt, put a haunted house in this famous sketch: 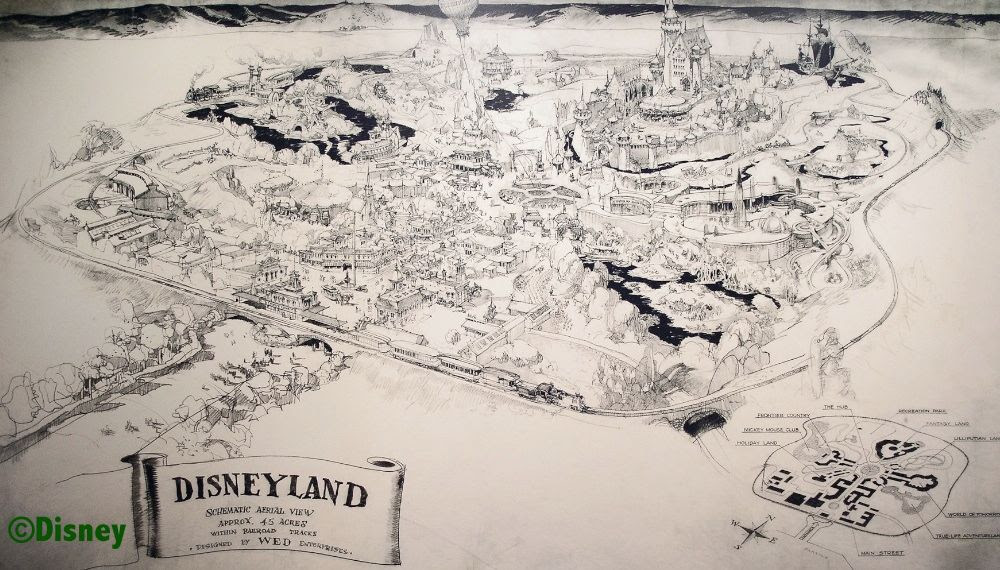 Many of you know the story.  One of the potential financial backers for the Disneyland project (ABC network) wanted to see something concrete before committing themselves, so Walt and Herb did this sketch in a hurry-up marathon session over a weekend in 1953, and it did the trick.  Anyway, reader refurbmike pointed out in a comment that it may well contain a haunted house, and sure enough, in exactly the same spot as in Henessey's sketch, you find this: 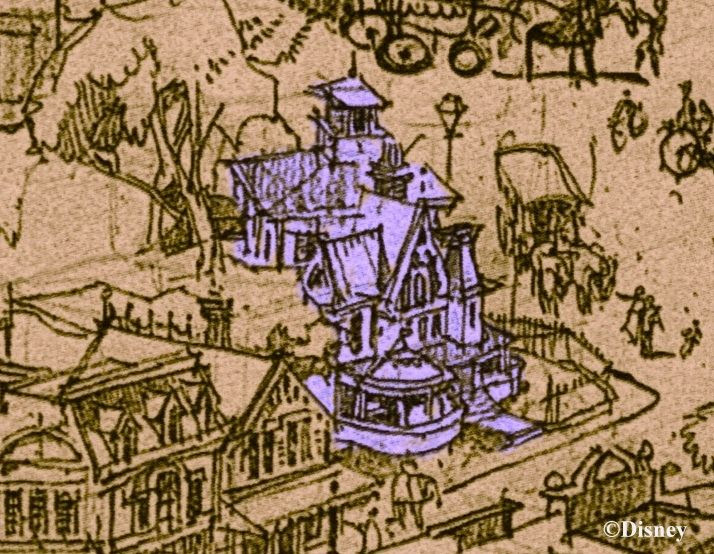 Since Ryman's sketch actually precedes Henessey's, we can be pretty confident that this does
indeed represent a haunted house, since Henessey evidently interpreted it that way.

Moving on, at least one artwork in this discussion can be debunked.  The following drawing by Roy Rulin has been identified in a Disney publication as a concept sketch for a Disneyland haunted house.  In reality, it's a concept sketch for a 1956 Hardy Boys television episode, "The Mystery of the Applegate Treasure."  Compare the photo below from the show's opening sequence.  (Special thanks to readers Chris Merritt and Jeremy Fulton for clearing up the old mystery.  A couple of modern-day Hardy Boys, I guess.) 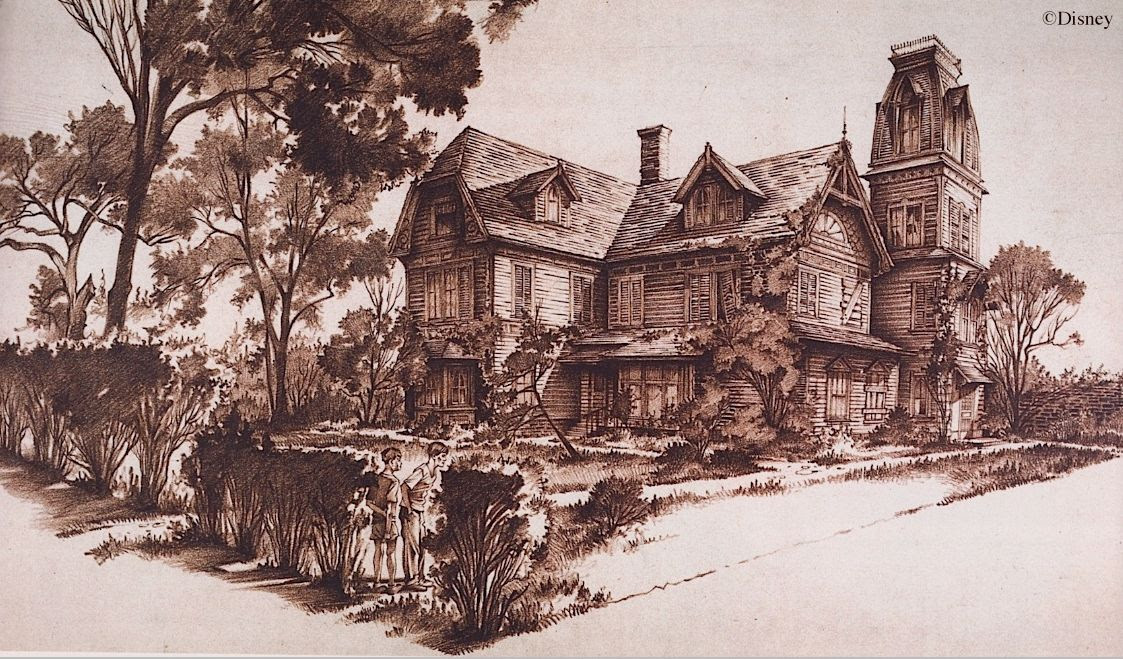 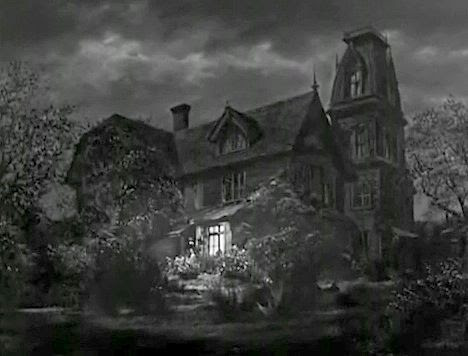 The first artist to come up with a design with serious legs (although that sounds like something Rolly Crump would do) was Ken Anderson, in 1957.  Not only did he sketch a haunted house, he did preliminary architectural design on it as an attraction. His rough sketches were taken up by Sam McKim and Marvin Davis, who then did some beautiful elevation sketches. These have been widely published. Sam was confident enough about this design to put it on one of his classic, cartoon-y, souvenir park maps, as if it was a done deal.  We're not on Main Street any more.  This one is in the back corner of the proposed New Orleans Square, almost in Adventureland.  In fact, it's right about where the Indy Jones ride is today. 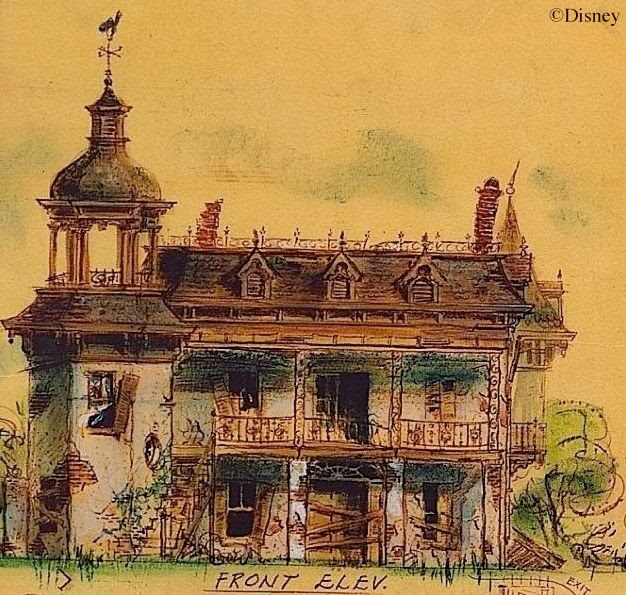 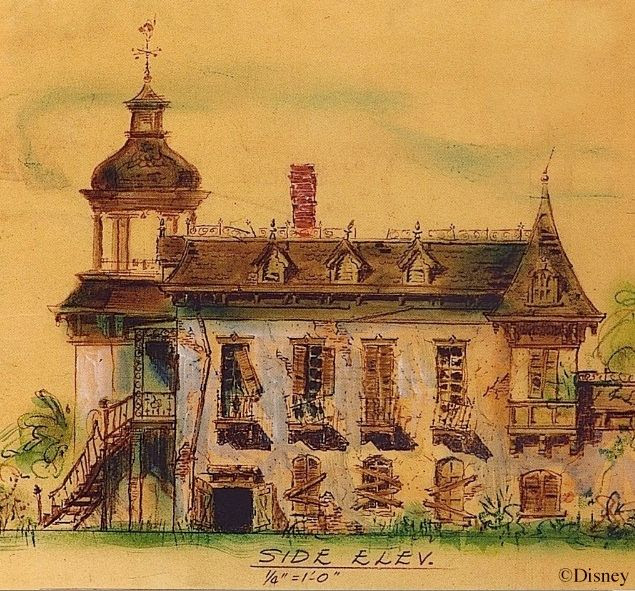 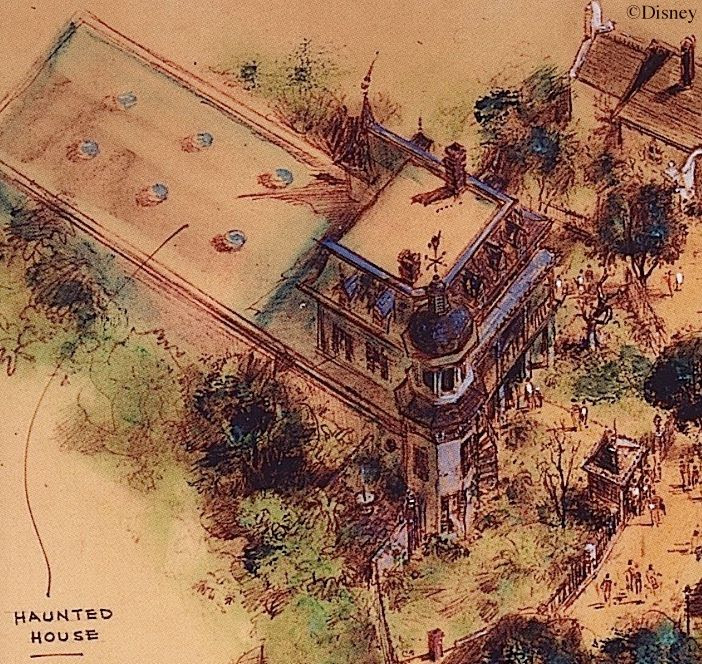 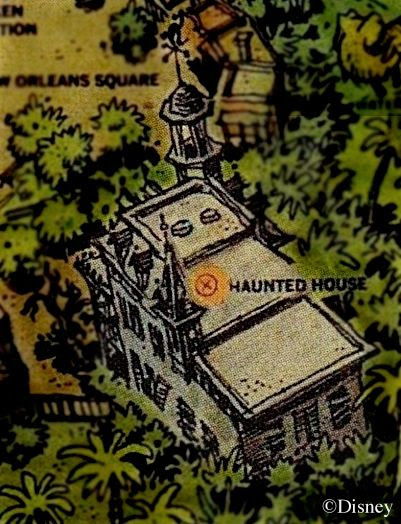 In May of 2014 an early Ken Anderson sketch was published for the first time: 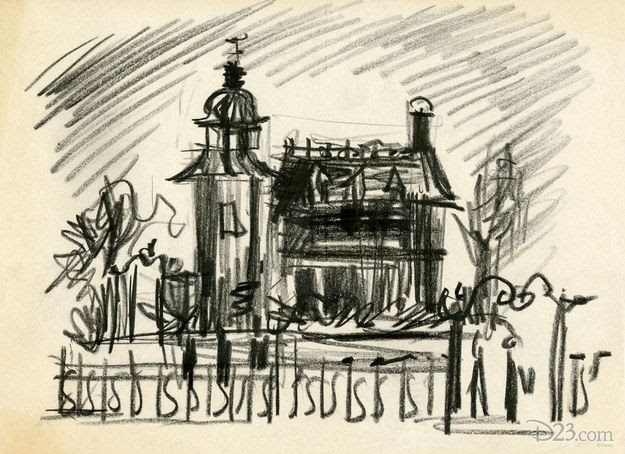 Joe "Datameister" Cardello, a future Disney Imagineer, has taken a special interest in this disused design and produced a highly-ambitious and very impressive three-dimensional computer-graphic recreation.  You can see the whole set of images HERE. 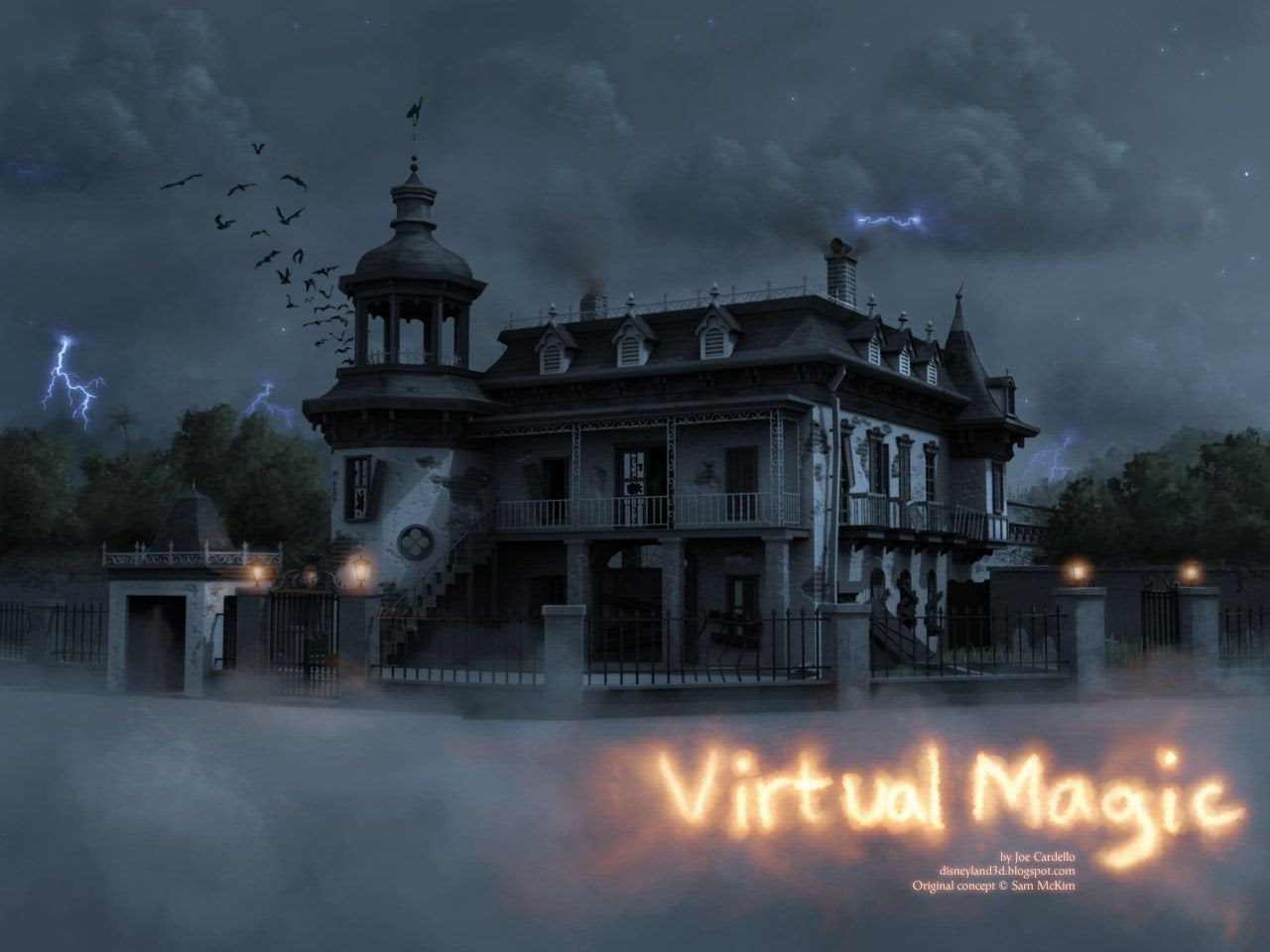 The next chapter in the story is very well known indeed.  Ken Anderson did another sketch, based closely
on the Shipley-Leydecker house in Baltimore, and it proved to be the defining look of the building to come. 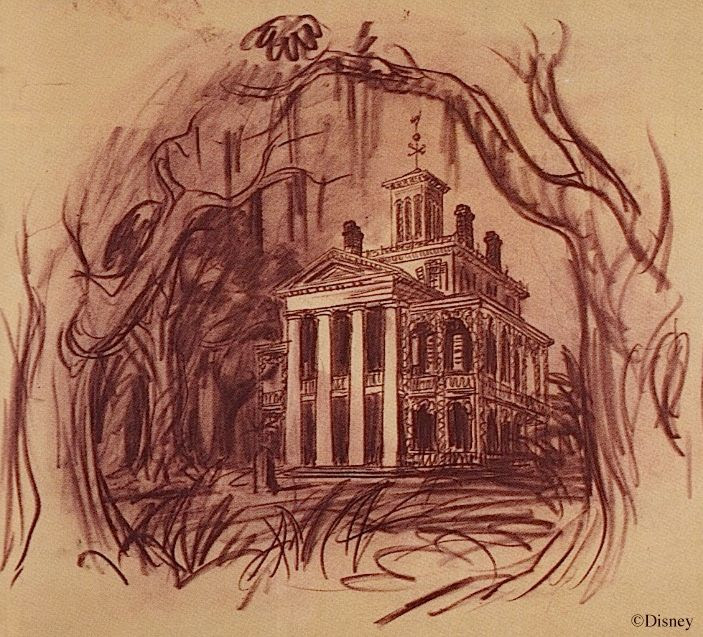 Two or three artists used Ken's sketch as a springboard for further work, narrowing down the architectural details and conceptualizing the landscape setting.  Most famously, of course, Sam McKim did a paint-over of Anderson's sketch, producing what is perhaps THE most iconic rendering of the HM of all time.  The whole painting seems to swirl with movement.  Yeah, I know I've posted this before, but I never tire of looking at it. 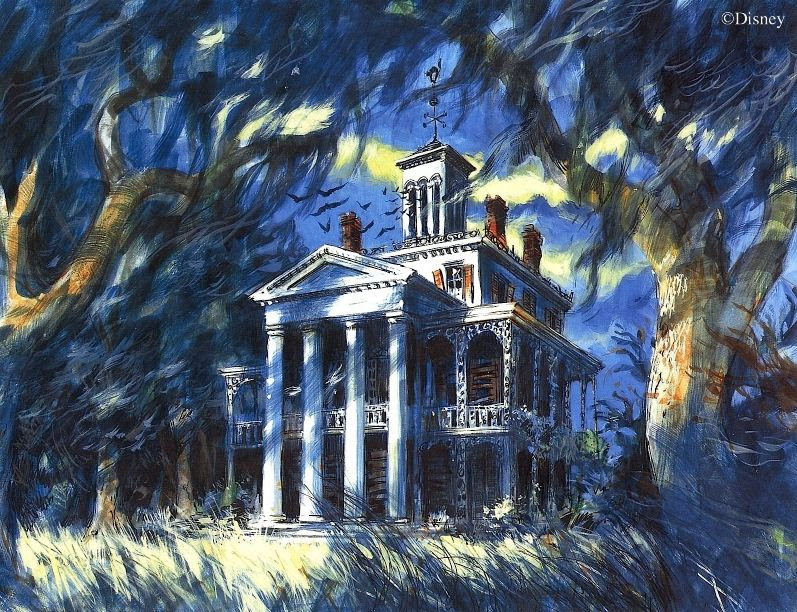 Note that Ken kept his black cat weather vane from the earlier version.


This Anderson sketch dates from September 17, 1957. The painting is probably
his as well. They show the kind of setting Ken explicitly had in mind. 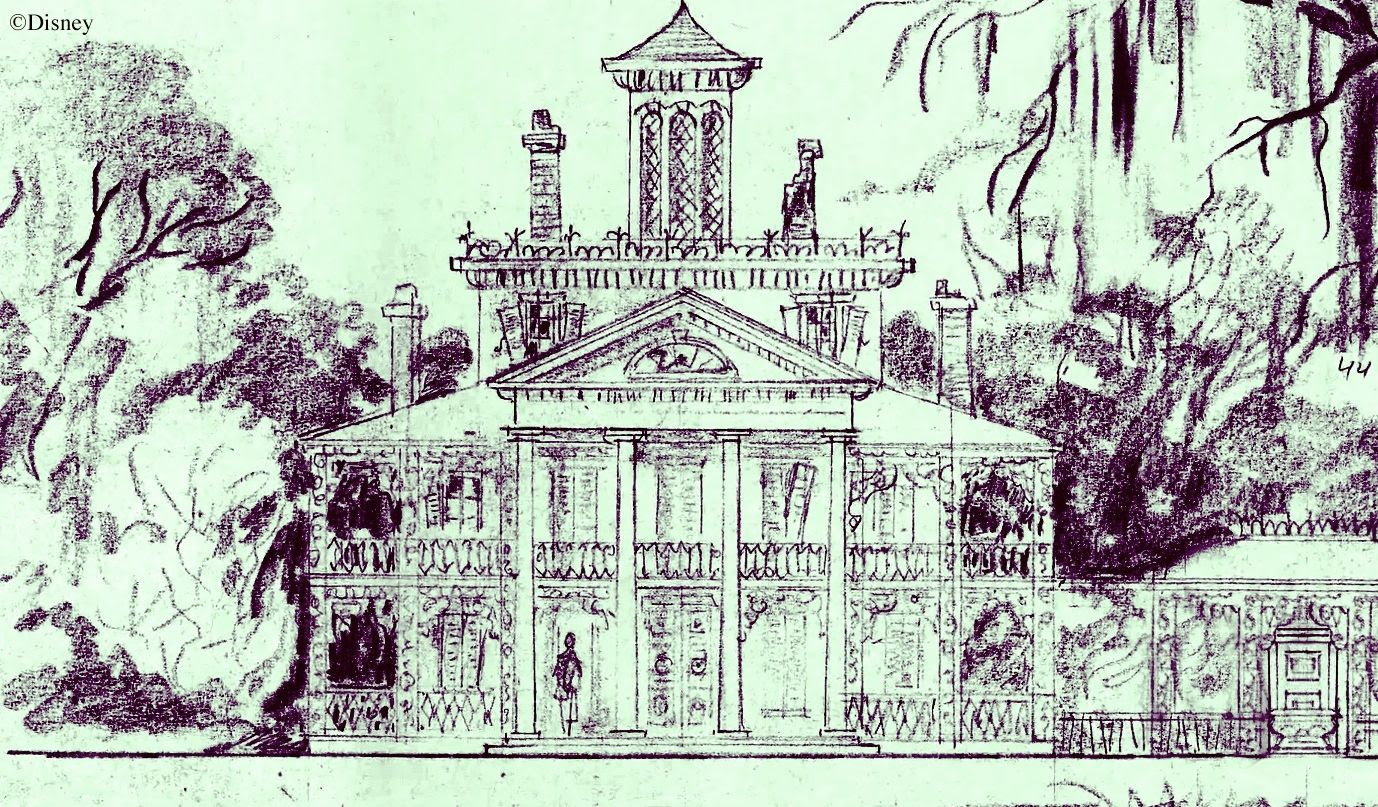 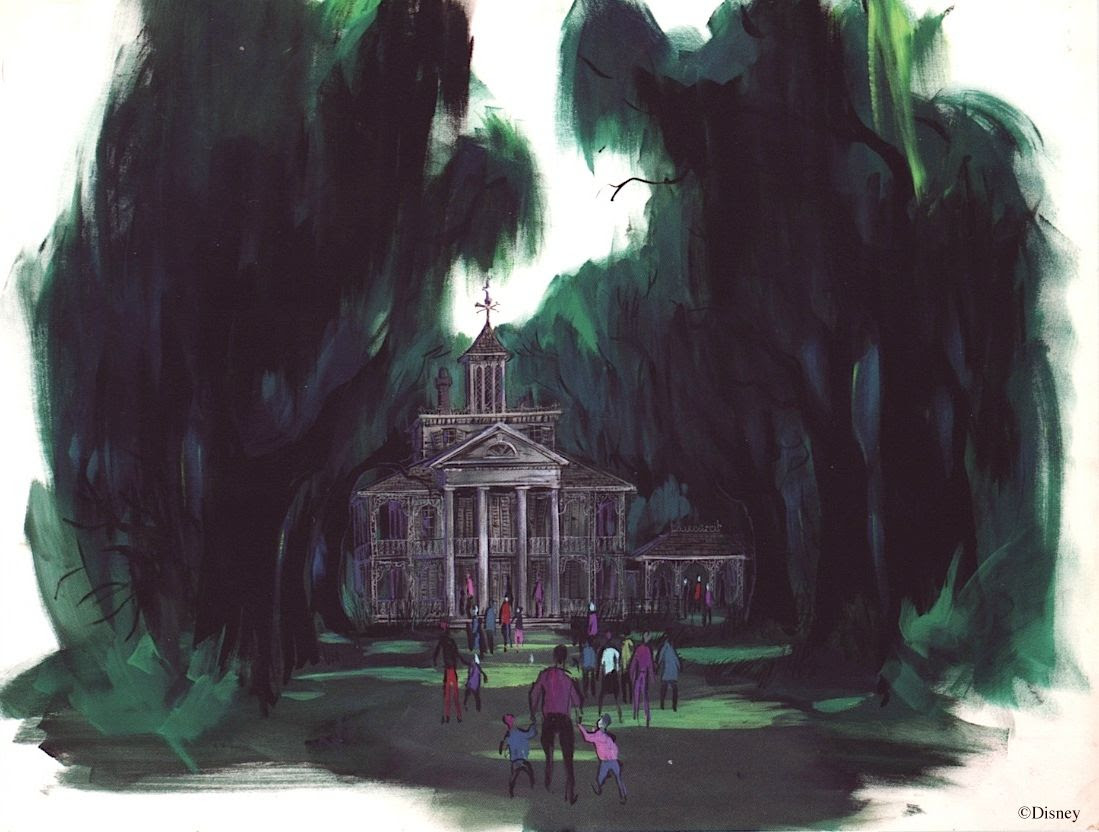 With this 1961 sketch (actually, a "working elevation" drawing) by Marvin Davis we are getting close to the finished version, but it still retains a number of features from the Anderson version that will be altered within the coming year.  For example, we still have the square Shipley-Leydecker cupola, and we still have McKim's black cat up on top, soon to be replaced with a schooner (sorry, Sam).  We finally have the neat and clean look that Walt demanded, anyway. 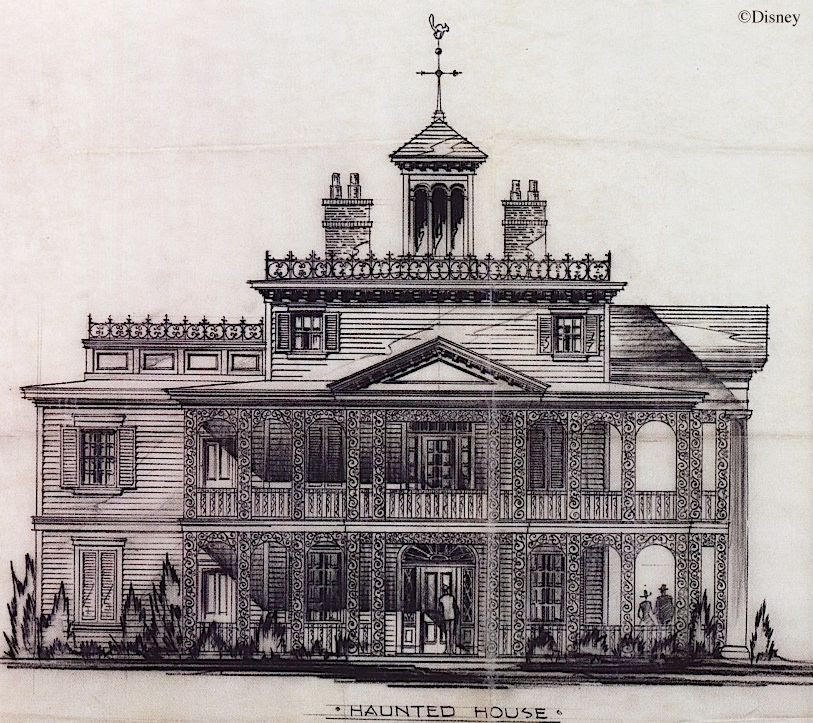 In fact, if you compare the Marvin Davis drawing to blueprints of what is actually there, you will notice quite a number of substantial differences, so in my view we are still en route from Ken's first sketch to the final building, although obviously we are getting close. 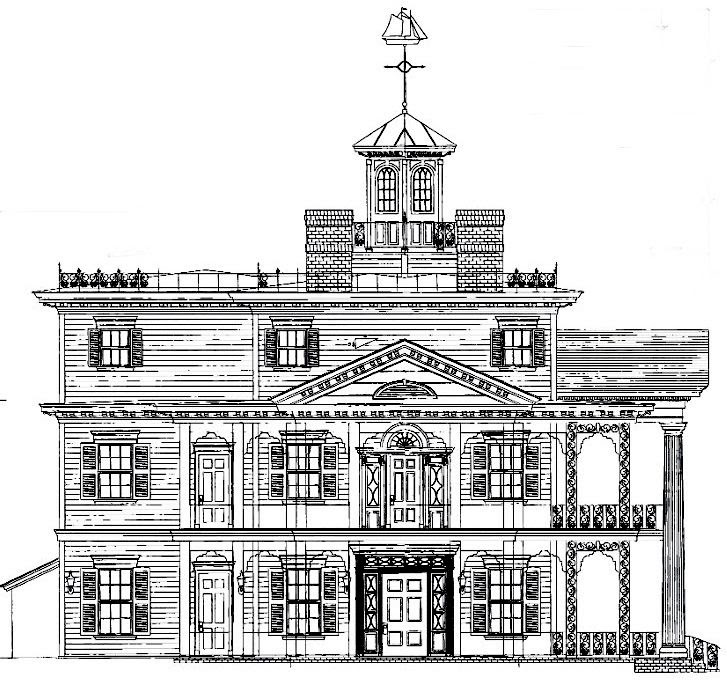 A similar story about the architectural development of the WDW Mansion could be told too, but naturally it wouldn't have the depth of history or the sheer variety of artistic concepts that the original DL version had. 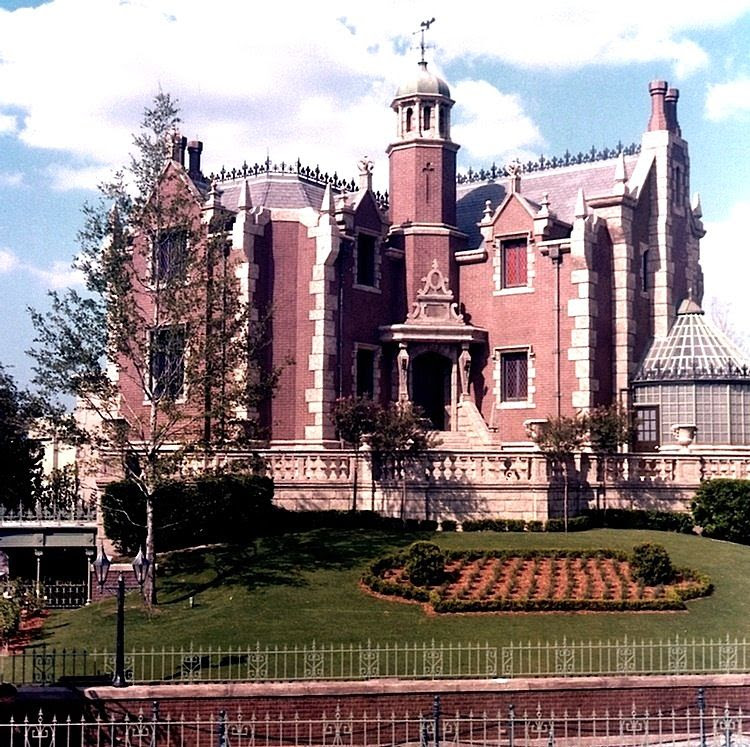 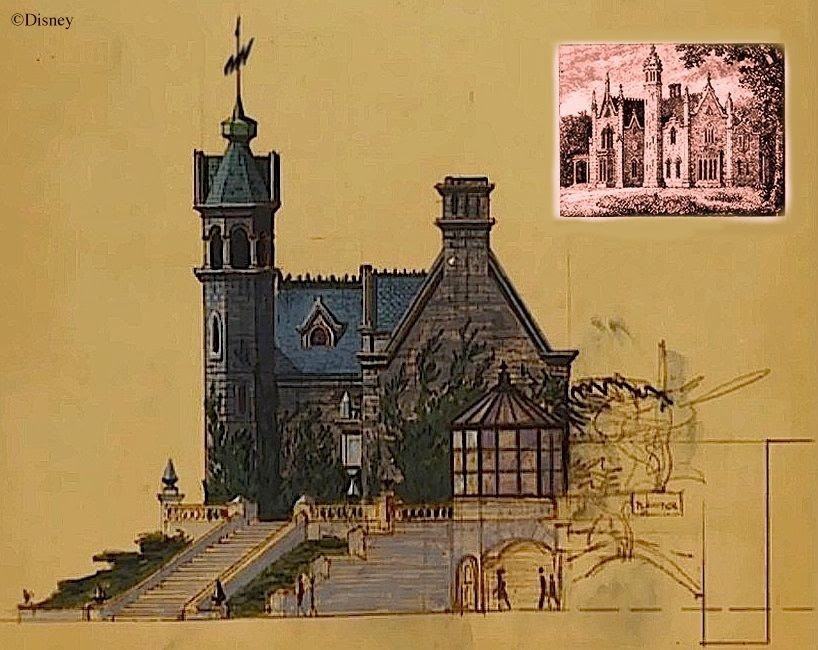 One alternate worth mentioning is Disney legend Herb Ryman's concept of the WDW HM as an ordinary looking, pre-revolutionary, New England manor house.  It's handsome, yes, but . . . a little dull. 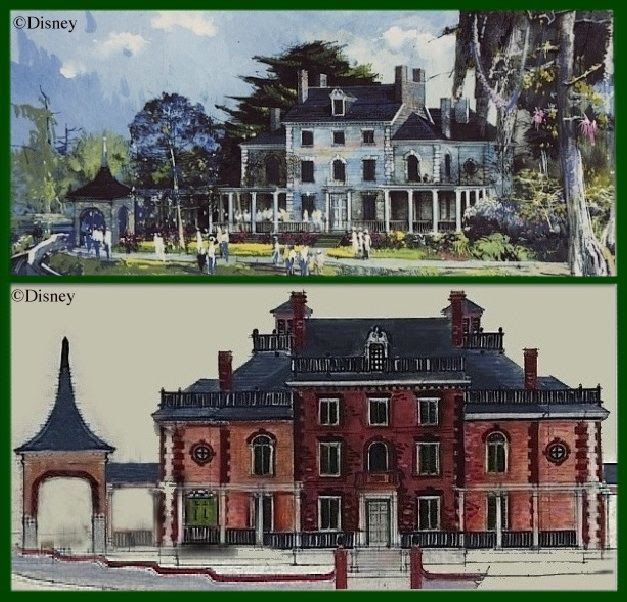 According to Doombuggies, the design may have been inspired
in part by the Sullivan Dorr House in Rhode Island.