.
Speaking of misfiring jokes, there are some that don't exactly misfire, but they do sputter a little, and no harm done.  Take for example, the Brick Arm Guy, another memorable gag:

Anyway, it's an amusing gag as it stands, but I think it's supposed to be a much more pointed punch line to a much larger joke.  First of all, while other ghosts are "coming out" to socialize, this Oscar-the-Grouch ghost is trying to get away from all of that.  Second, he stands in contrast to other ghosts in the same exact circumstance.  I'll bet not one rider in a million catches the joke, though.

There are three bricked-up crypts in the graveyard that feature bulging, flexing brickwork.  The ghosts inside are trying to break out.  By the time you get to ol' Brick Arm, you're supposed to be expecting the exact opposite of what you see, enhancing the gag.  You can see on the blueprint the three bulging crypts in purple, with Brick Arm in pink. 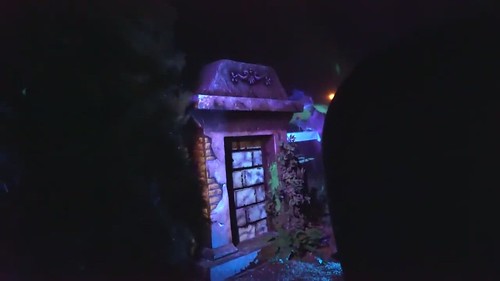 The first two are next to each other, right after the Royal Seesaw, and the third is up on the hill a bit, between the Hearse scene and the Mummy scene.  Do you want what's behind Door #1...