Here Comes the Bride, Part One

And a long ways it was that she came, too.

If Madame Leota is the central character in the Haunted Mansion, its true pivot point, you would hardly guess it, because the character that the Imagineers have tinkered with the most is the Bride in the Attic, and each time around they enhance her role and her presence.  No other character in the ride has been retooled so much, and yet she remains the same essential character.  The curious history of this figure has been told in fits and starts, and it seems like a good idea to pull together the separate narratives into a single history.  That will take several posts.

As usual, it all starts with Ken Anderson.  You will recall that Ken was given the haunted house assignment in 1957, worked on it for a few years, and then was yanked off of it to join the army of artists working on the Sleeping Beauty film.  During those two years, Ken came up with a fat portfolio of ideas and artwork, and so much of it is reflected in the finished attraction that by rights he should be known as the true father of the Haunted Mansion.  With regard to the attic bride, there are several concepts there that go back to Mr. A.

First of all, the setting:  an unfinished attic.  This was a throw-away idea.  As far as I can tell, Anderson did one sketch but never incorporated an attic into any of the backstories he concocted for his haunted house walk-thru, nor does it appear anywhere on his Ghost House floor plans.

But of course, the ride eventually did get an attic, and even some of its original details are Andersonian.

The bat mobiles (yes, that's what they called them, even on blueprints) enjoyed a nice long career in the Haunted Mansion, lasting from opening day until 2006 (2007 at WDW), when the bats finally flew the coop to make room for Constance.

The "hanging strings" (i.e. simulated spider webs across your face) fared less well.  They lasted less than two days, according to X Atencio.  After kids realized they were there, they pulled them down.  Which is odd, considering that exactly the same gag was used in the original Snow White ride, where it lasted for many years.

Okay, so we give Ken Anderson credit for the attic being there, and even for a couple of gags that used to be in it. What about our bride? Patience, friends, we'll get there.

The original inspiration for what would eventually become the Haunted Mansion's attic bride was the Brown Lady of Raynham Hall.  All of the Imagineers who worked on the HM did research into ghost lore, and Ken Anderson undoubtedly came across what is often cited as the most famous ghost photograph of all time, taken in 1936:

You can read more about this photograph here. In addition to the photo, there are abundant reports of ghost sightings at Raynham Hall, together with a purportedly true story about who she is and how she got there.  In a nutshell, there are dark suspicions that in the 18th century, the lady was done in by her husband, a man named Townshend with a violent temper.  They said he even used to smash guitars onstage (oops, wrong Townshend).  Anyway, in one sighting the ghostly lady was carrying a lantern.  In another one, the unlucky guest who crossed her path got a good look at her face.  It glowed, and the eye sockets were empty.  This definitely ain't one of them friendly ghosts; whenever she appears, she always looks royally p.o.'ed.


Between the photo and these reports, Anderson came up with an idea for a scene in the Ghost House.

One small change he made was to give her a candle rather than a lantern. Seemed a little spookier,
I guess. But the face looks right, and the influence of the famous photograph is obvious.

Some years later, when Marc Davis held the creative reins for the oft-delayed HM project, he must have seen these Anderson
drawings and liked them.  He came up with his own version, with a few new details like a half-darkened face and a cat.

The character most directly inspired by it is obviously the Opera Glasses Lady at WDW, one of the so-called
"Sinister 11" portraits. These days she can be seen at the end of the balcony overlooking the ballroom scene.

In 1968 Davis came up with a strange ghost nothing like this, something more in the realm
of sheer fantasy. Chris Merritt calls her the "moving lights ghost" (MDIHOW 398).

If you compare this Moving-Lights sketch with our Anderson-derived, dark-faced candle holder, you find nothing in common between the two characters other than that they are females. But when Marc painted M-L, he conflated the two, giving M-L (1) a candle, (2) a darkened upper face, and (3) a pet, although the cat became a dog. He labeled the character "Beating Heart."

Ayup, we're getting there.

At some point, Davis decided to kick this increasingly-familiar-looking lady upstairs.  All the way up.  When they made the maquette figure, it took up residence in the scale model for the attic.  They also scratched the dog (mercifully).  By now we are pretty late in the game.

Well, we finally got what is recognizably our HM character into the attic.  There's only one odd thing about all of this... 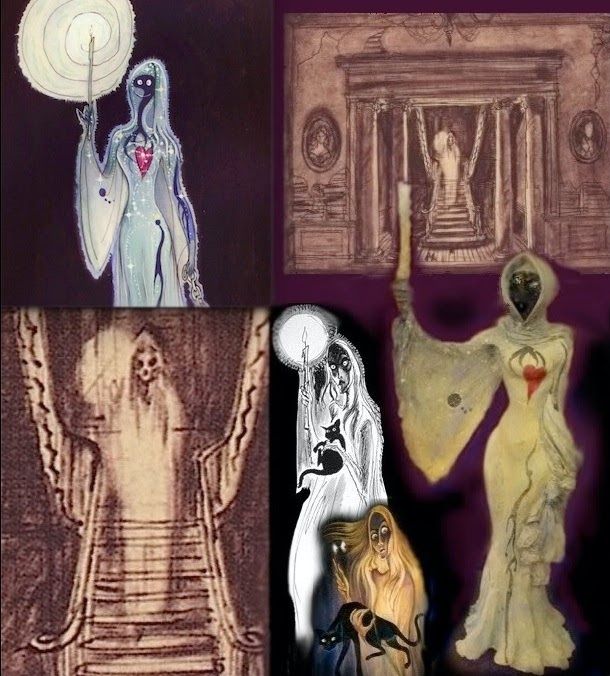 None of these phantom females is a bride.  It seems the character got a long ways toward the finish line before it ever donned a wedding gown.  That will be next.