In some ways the Haunted Mansion has been a very conservative institution.  Despite all of the changes over its five decades, the number of ghosts that have been eliminated from the show outright is surprisingly small.  Today I'm blogging about one of those.  He's not as well known as the Hatbox Ghost or April-December, but he's still worth a post, and this is it.

In the previous post, I mentioned that no ghosts in the HM are visible to the eye until you get to the Séance circle, where Madame Leota apparently helps them get their mojo on, and they materialize.  Just for kicks and giggles, which ghost is the first to do so?  After all, if our earlier analysis is correct, this is a thematically significant point in the show, and the first visible manifestation of a ghostly form should be a point of interest.  Until 2001, it was an easy question to decide who was first.  Now, not so much.

In the original 1969 Séance circle there were only three visible ghosts.  There was Mdm L herself, there was the greenish ectoplasmic ball floating around above the doorway by which you enter the room, and there was the one I call Purply Shroud, for want of a better name.  The Madame is still there, of course, and until 2017 or 18 so was the ectoplasmic ball. Since Mdm L obviously doesn't count as one of the ghosts having trouble getting through, and since the ectoplasmic ball is or was only marginally classifiable as a visible ghost, it follows that Purply was the first to unambiguously assume a visible ghostly form.  But he's gone, and I'm surprised at the number of longtime HM fans and ordinary Disneylanders who don't remember him at all.  I always liked him.

You can see what he looked like in the reconstruction above, a shrouded figure similar to the one in the crypt in the graveyard, just before the opera couple.  The effect is produced by a fan blowing on a piece of silk upon which the figure is painted in fluorescent paint.  In regular light they look white, but under black lighting they glow.  In the Séance circle it glowed as a deep, dark purple.

He was to your left as you entered the room, but you never saw him at that point because of the angle he hung at and because your doombuggy faces the other way.  You first saw him across the way as you swung around, about half way through the room, in much the same way as you first take note of the ecto ball.

Photos are scarce.  Here's a rare shot of the WDW Séance circle that shows their Purply Shroud, which is also gone:

And here's an even rarer shot of the actual WDW painted figure, the same one visible in the above photo:

It's not hard to figure out which Imagineer is responsible for the design.  This piece of Claude Coats concept art pretty much ends any debate:

Purply hasn't vanished utterly.  Tokyo Disneyland still has him in their Mansion, although there he has a face: 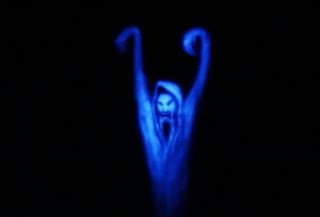 
I don't care for the face, but maybe that's because it reminds me of the Zig-Zag guy:

You see what happens, kids?  Smoking will kill you.

Here are some DL videos from the very late 90s in which you
can briefly see ol' Purply rippling away in the background: 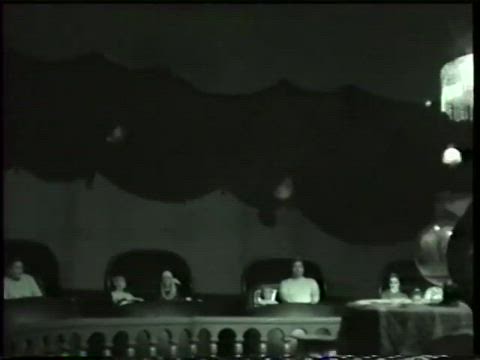 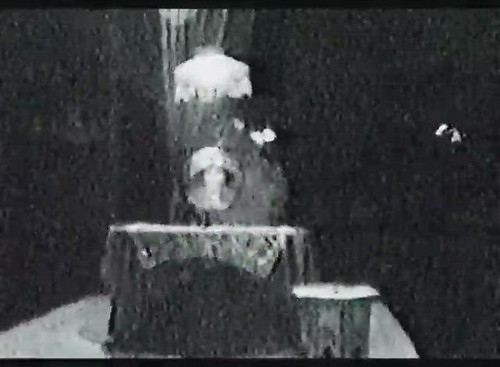 For the seventh anniversary of his blog, Daveland posted a nice photo from 1972:

Yet another good photo came to light in March of 2015. This one was taken in 1980, and the most interesting thing about it is that the design of Purply seems to have changed. His raised arms appear to be gone. He resembles very closely the shrouded figure in the graveyard crypt.

Perhaps the best feel for the original effect can be taken from this "magic eye" stereo view of the
Tokyo version.  With its sense of three-dimensional space, this is very much like what I remember.

They took Purply down for the first "Nightmare Before Christmas" overlay in 2001 and as far as I know never put him back up.  For those who dislike the NBC overlay (aka HMH), this is one more reason to nurture your resentment.  It's kind of shabby treatment for the first ghost with the savvy to take advantage of Madame Leota's administrations.  *bangs fist on table*  It's a dirty rotten shame, that's what it is.